A teen-aged girl in tight jeans stood admiring a prisoner’s needlepoint on display in the four-storey Dome where 200 inmates had rioted in 1963. A baby girl in a buggy dropped her milk bottle outside the room where guards had killed prison classification officer Mary Steinhauser during a hostage drama in 1975. And a woman with an Instamatic took a picture of her brother-in-law mugging behind bars in the remains of the east wing,which prisoners had demolished during a $1.8-million rampage in 1976.

In the week before Solicitor-General Robert Kaplan officially closed the maximum-security British Columbia Penitentiary last month, more than 7,000 voyeuristic visitors a day bade an overdue goodbye to the 102-year-old turreted grey-stone fortress on prime hillside land above the Fraser River in the Greater Vancouver city of New Westminster. The city would like some of the 65 V2 acres for parkland and housing, and there’s talk of preserving the more classic buildings as a heritage site.

A symbol of Canada’s creaking corrections system, the decrepit prison is the first of four 19th-century federal penitentiaries to be phased out, with Laval (near Montreal), Kingston and Dorchester (near Moncton) to follow.

The pen has been described by a commissioner of penitentiaries as “the worst we’ve got” and by former solicitor-general Warren Allmand as “the Black Hole of Calcutta.” Since 1948 Ottawa has announced its imminent closure 26 times.

lighting for exercise after dark. Its modern successor does. The Kent maximum-security penitentiary at Agassiz, 90 miles east of Vancouver, opened 10 months ago and now holds 155 inmates. Despite its relative coziness, Kent has already suffered a brief hostage-taking, a cell-smashing spree and a one-month prisoners’ strike.

Still, Kent would have to do a heap of hard time to match the B.C. Pen’s cheerless past. An escapee who killed a guard there was executed on the grounds in 1913, the only inmate ever hanged at a federal prison. During the early ’60s, convicts working in the printshop fashioned phoney identification cards for a nationwide forgedcheque ring, and an underworld kingpin managed much of Vancouver’s heroin import trade from his cell. In 1966 an off-duty B.C. Pen guard opened a boobytrapped Christmas package which blew his arms off and blinded his 10-year-old son in one eye. Ten years later eight prisoners won their B.C. Supreme Court action arguing that long-term detention in the pen’s solitary-confinement unit— which sometimes included beatings and tear-gas attacks—constituted cruel and unusual punishment under the Canadian Bill of Rights. One of the eight was the charismatic Andy Bruce, serving a life sentence for murdering a nightclub dancer; he had been involved in three hostage-takings and last year, the day before his transfer to Ontario’s Millhaven, he slashed a guard in the arm with a razor blade.

At its most crowded in 1961, when inmates had to sleep in corridors, the

prison held 300 more men than the 450 for which it was designed. Empty since Feb. 15, it appeared strangely peaceful during the public tours, with violet lilacs blooming on lawns where prisoners once tried to ignore the KEEP OFF THE GRASS signs. But there were still scars from the violence that became synonymous with the B.C. Pen’s two final destructive decades of life.

Adjoining cells in the east wing remain connected by ceiling-high holes that prisoners wielding washbasins and iron cots punched through the brick walls. A graffito on one wall records “B.C.P. Taken Sept. 26/76” and another remarks, with gallows humor, “TROUBLE: We have had better days—i.e. yesterday for instance.” The Super Maximum Security Unit, Canada’s firstinstitutional green-and-yellow cells for dangerous prisoners like Andy Bruce and those in solitary—is alive with pencilled calendars, wall paintings and sometimes poignant inscriptions: My eternal soul/Redeem your promise/In spite of the night alone and the day on fire. And: God Please Help Me I Can Ï Take It No More The End Is Near.

The pen opened in 1878 in the wake of the B.C. gold rush, and the warden for the first 23 convicts was a provincial premier’s father, Arthur McBride, who packed a shotgun concealed in a walking stick. There were escapes as early as 1893 when a stagecoach robber named Martin Rowland scaled a fivefoot picket fence in front of an armed guard. Bill Miner—who masterminded Canada’s first train robbery and invented the phrase “Hands Up!”—was 60 when he and three others dug a hole under the prison fence and escaped in 1907.

A 51-year-old ex-convict nicknamed Red toured the prison this month and recalled his three two-year terms in the pen for armed robbery and possession of stolen goods. His first stretch was at 17, just after a 1946 prison strike protesting inferior food. Inmates then couldn’t converse between 5 p.m. and 7 a.m. “She was tough in those years,” Red says in a rusted voice. “They had what they called ‘dumb insolence’: even looking sideways or snickering could get you three days in the hole.” His baptism in solitary totalled 14 of his first 24 months in prison. Daily rations were unsalted porridge, six slices of bread and water; he read the Bible, his only book, SV2 times; and a friend flushed tobacco in waxed paper down to him through the toilet system. Because he had heart palpitations, Red couldn’t be punished on the paddling table where recalcitrant prisoners were lashed with a leather strap studded with holes which trapped and tore the skin. Instead: “They used the fire hose on me. They nearly killed me down there; I was

just black and blue from the force of the water. The doctor yelled at them to stop.”

There were ways of beating the system: using hand signals to play silent checkers between cells, paying a guard $10 to smuggle an uncensored letter, even digging a hole in the field to the west of the pen and leaving a piece of sod as a signal for a friend on the outside to drop money there. But a despairing

18-year-old in the cell next to Red hanged himself from the bars of the door and another youth jumped to his death from the top tier of the Dome.

The inevitable anger of caged men magnified in later years when the prison became an impossible stew of distinct populations: the hard-core

cases of the Super Maximum Security Unit, the hated sex offenders and informers in protective custody, the mixed bag of new prisoners brought to a penitentiary designated a regional reception area, and the general population. “You had four separate prisons running within one set of walls,” says the pen’s last warden, Herb Reynett.

Reynett considers his three years there as reasonably problem-free—despite the gang killing of one prisoner and the attempted murder of a guard by Steven Hall, whom the warden describes as the most dangerous inmate he has known. Yet Hall had a whimsical side that once prompted him to ask the warden for a rubber female mannequin. Three years ago he stabbed himself in

the abdomen with a screwdriver, then hijacked the ambulance that came for him. Rearrested, he later slit the throat of a guard and tried to escape with four other convicts, including Andy Bruce. Hall surrendered only after demanding a Polaroid photo of the guard in hospital to prove that he hadn’t killed him.

Another celebrated escapee was Clifford Olson, who in 1965 leaped from the window of a Vancouver hospital where he was convalescing. Recaptured, he left the B.C. Pen legally last January under eight months of mandatory supervision, a parole-like release. This month Olson was charged with impaired driving. A few days later, still free, he made an emotional visit to the penitentiary during open-house week. Suspicious guards spotted him casing his old cell and they phoned police—who had just learned that Olson was wanted for parole violation. He was picked up before he could walk out the open gates of the pen. 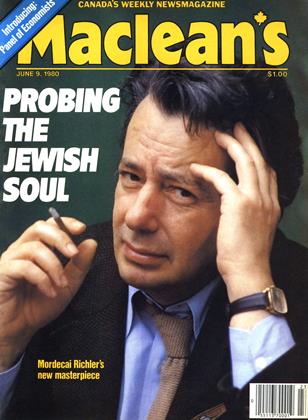