Ronnie always told me everything looked better from the back of a horse—and he was right!—Nancy Reagan

The star of Stallion Road and many another B-grade horse opera never did win an Oscar nomination. But this Wednesday, barring an unscripted and unthinkable unhappy ending, as conservative America roars its approval, Ronald Wilson Reagan, ex-actor, ex-liberal and ex-governor of California, will be nominated for the greatest role of his 69 years.In the rancid, riot-torn urban cockpit of Detroit, at the 20,000-delegate GOP convention, Reagan will formally, with an old actor’s smiling modesty, become the Republican choice to guide the United States through the 1980s. “It’s a coronation,” burbled one Reagan staffer last week (forgetting Tom Dewey and Richard Nixon). “We haven’t had a winner like this since Ike!

Nor, opponents note, has the GOP previously boasted a candidate willing—so he says—to resign the presidency should his physicians detect signs of senility. Are Americans ready to elect the oldest chief executive in their history? Apparently they are. Ladbroke’s, the London odds-maker, has Reagan odds on favorite at 4 to 7 (Carter at 13 to 6). Jimmy the Greek offers much the same from Las Vegas. The latest U.S. polls have him running 15 points ahead of both the incumbent and independent rival, John Anderson. And, with little hope of stealing the limelight from the Ronald Reagan show running on all the top networks this week, Carter has gone fishing in Alaska and Anderson has flown off on a world tour.

The eastern establishment is naturally distressed at the thought of this Californian arch-conservative, after 12 years of campaigning, putting his boots up on the desk in the Oval Office. But the question many ask, some disdainfully, is; can Reagan really run America? At first glance, his credentials for the world’s most powerful office—Eureka College, Hollywood, corporate PR hack, governor of kooky California—seem slender. In fact, they are no worse than those of many recent presidents. Eight years in charge of the nation’s largest state, with a population larger than Canada’s, a gross national product roughly equal to Britain’s, should count for something.

Certainly middle America has a taste for the man. In a world of hostages, fuel crises, inflation and Soviet expansion, Reagan positively glows with confidence and reassurance. He’s someone whose favorite reading, after the Bible, is Reader's Digest, whose favorite TV show is Mission Impossible, where the technology always works. He’s a poolside barbecue man, who relaxes in jeans at the ranch with business and movie world pals, telling corny one-liners which send shudders down liberal spines. Sometimes they go a shade far. Maybe he shouldn’t have hoped the poor and blacks in that famous Hearst food handout at the time of the Symbionese Liberation Army kidnap would die in an outbreak of botulism. But that’s just Ronnie, says the man in the TV armchair. He’s the candidate who looks backward—to America as it was “and can be again.”

Last week, Reagan opened his splendid ranch, Rancho del Ciclo, high in the golden California hills overlooking the Pacific, to the press. They snapped California’s white knight on his white horse. They saw the picket fence he built himself, his Stetson on a peg next to the muzzle-loading rifle, the pier (also built with his own hands), with Nancy’s own canoe (Truluv) tied up. A $1.5-million 700-acre slice of nostalgia, a vision of the American way as it could be. And all a long, long way from Tampico, Ill., where on Feb. 6, 1911, Ronald Reagan was born. As he describes it in his gruelling autobiography Where's the Rest of Me: “The story begins with the closeup of a bottom . . . my face was blue with screamin’, my bottom was red with whacking, and my father claimed afterwards he was white . . . ever since birth I have been particularly fond of the colors exhibited.” Reagan goes on to say that Mom was saintly, Dad a lovable Irish drunk, the family poor but honest. They never considered welfare. Mother had thwarted theatrical ambitions. Her charitable dramatic readings in prisons and hospitals steered young Ron’s interests stageward. Mrs. Reagan also handed on her religion. Her son today attends the Presbyterian Church whenever he can, and tends to a literal interpretation of the Bible.

Young Reagan’s story is a slice of American-dream pie. Shortsighted (he still wears glasses over his contact lens to read), with a string-bean physique, he worked his way through college as dishwasher and lifeguard. He acted, ran track, played football, found work in the Depression years as a radio sportscaster. That led to Hollywood and a screen test. (Agent: “I have a young Robert Taylor waiting outside!”) There was even a stint of modelling briefs for a Los Angeles art college, which named him, in 1940, “Adonis of the Year.”

Warner Bros. thought enough of his screen talent to pay him $200,000 a year at the height of a career that included a few golden oldies. But of his 50 movies over 15 years, most were gloriously bad and have recently been in great demand on U.S. college campuses. Other politicians have skeletons in their closet, Reagan has Bedtime for Bonzo. All prints are booked for the next 12 months at $45 a time.

Reagan began his Hollywood period as “a hopeless hemophilic liberal. I bled for causes.” The shift to the right came in the post-war, Cold War years when his movie career was fading, he himself was aging, his marriage to actress Jane Wyman was on the rocks and, in short, he was ripe for conversion. As president of the Screen Actors’ Guild (SAG), Reagan had developed a political talent for negotiation and compromise. He appeared, for example, as a “friendly witness” at the House Un-American Activities hearings in 1952, but infuriated the Red-baiters by speaking out for the rights of the Commie sympathizers he was simultaneously denouncing.

A spell as a travelling TV salesman for General Electric honed these talents as an electronic performer. TV has made the preacher, the politician and the used-car salesman almost indistinguishable in America, and Republican moneymen were quick to spot his gifts in all three spheres. He campaigned for Richard Nixon, and did a fantastically successful TV spot for Barry Goldwater—said to have accrued $1 million in a few minutes of airtime—before becoming the Chosen One of California business as governor.

Along the way, he met his second wife, Nancy Davis, an aspiring actress ludicrously accused of Communist affiliations. Miss Davis was the prim daughter of a deeply conservative Chicago neurosurgeon—but those were the McCarthy years. Reagan, asked to look into her case as SAG president, fell in love. Within months they were married. Mrs. Reagan today is an elegant, politically shrewd woman who influences her husband’s thinking at many turns. The Reagan family as a whole, however, is little known. Daughter Maureen, by Jane Wyman, is the sharpest, with her own newspaper column and radio talk show. Adopted son, Michael, is a plump, conservative businessman who helps campaign for Dad. Nancy Reagan’s children grew up in the 1960s. Daughter Patti aroused parental ire by living with a guitar player from The Eagles rock group. Youngest son, Ronald Prescott, 22, dropped out of Yale to join the Joffrey Ballet of New York. His fellow dancers say he has a star career ahead. Reagan strategists work to keep him out of the spotlight, at least until November. And Dad says, a bit defensively: “He’s all man. We made sure of that.”

But it is Reagan’s eight years in “America’s second-toughest job” that provide the soundest clues to his possible performance as president. To win California’s governorship he fought a harsh campaign, playing on white middle-class anger with taxes, crime, porn, “welfare cheaters,” and won a landslide million votes over incumbent Pat Brown, father of present Governor Jerry. His first two years in office were marred by amateurish obstinacy. “A miserable performance,” says a leading Republican. On Day 2 of his term, he reneged on his chief campaign promise and—blaming a deficit left by his predecessor-ordered the biggest tax hike in California’s history—$1 billion. It was the first of three major tax increases that bloated the state treasury. Reagan today boasts that he returned millions in rebates to taxpayers. But the surplus went on growing and, in 1978, was a factor in the passage of Proposition 13, California’s famous tax-slashing measure.

In other traditional controversies— abortion, capital punishment—he showed more bark than bite. He talked darkly of a “bloodbath” at the height of the 1960s’ student revolt. None came. But funding for state education more than doubled. “He was a closet moderate,” grumbles one of the Republican old guard. “Not so good as his backers expected,” says old rival Jesse Unruh, Democratic leader, “or as bad as we feared.” Reagan likes to claim that his administration attracted “brilliant minds.” Many are still with him today. His advisers on economic, domestic and foreign affairs are chiefly old Californian cronies.

These are the men, drawn from a 47-member advisory committee, who today form his “kitchen cabinet” and who expect top jobs in a Reagan White House. A startling number come from Reagan’s favorite right-wing think tank, Stanford University’s oddly named Hoover Institution on War, Revolution and Peace. They include, among many others, Hoover Director W. Glenn Campbell, Reagan’s top domestic and economic gurus Milton Friedman and Martin Anderson, and chief foreign policy adviser Richard V. Allen. Edward Teller, “father of the H-bomb,” is a Hoover associate advising on nuclear matters. Richard Starr, a Russian-speaking expert and friend of Solzhenitsyn (who worked there for several months), advises on Soviet affairs.

Of more than 100 experts on 22 task forces now struggling to work out issue positions for Reagan, some 80 per cent come from California or the West. Top names include economic whiz-kid Arthur Laffer of the University of Southern California; Nevada Senator Paul Laxalt, campaign manager; and Edwin Meese III, campaign chief of staff, a former California district attorney. The candidate has his eastern allies, of course, but he is looking ahead to the early prospect when a majority of voters live in the West, as the centres of economic and political power follow the millions streaming from south and east to California and the sun-belt cities. Crucial to Reagan’s success in November will be his foreign and military policy attitudes. His “warmonger” label frightens one group of voters, while another wonders about his ability to cope with complex international issues. Sacramento is not Washington, and Reagan has never held down a post requiring foreign affairs expertise. Jimmy Carter had not either, but plans to make this a dominant issue.

So Reagan has assembled a panel of 40-odd military advisers, including nine retired generals and one retired admiral, whose pedigrees stretch back to the coldest Cold War days. Almost to a man the panel favors scrapping SALT II, boosting production of the MX missile and B1 bomber and upping defence spending by at least 10 per cent. Soon Reagan will be forced into a fierce debate over the cost, and the need, for this arms extravaganza—and how he intends to reconcile it with his three-year 30-per-cent tax-cut proposal. How America’s voters react could decide the question of who will be the 40th president of the United States. Not that there was any doubt in the minds of conventioneers pouring into Detroit last weekend. They just know that the man in the saddle, the spot from which life looks so much better, will be Ronald Reagan. 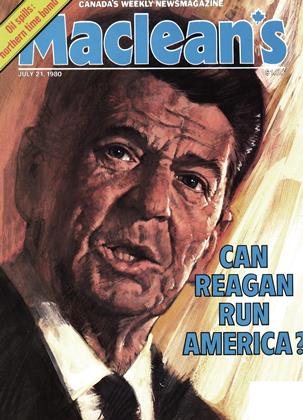