Words to love and live by as the summer days unfold Peter C. Newman July 28 1980

Autumn is the traditional publishing season and at least two-thirds of the 1,200 new Canadian books due in 1980 will be sold during the last

three months of the year. But summer is when many of us have the most time to read, so here is a brief rundown of a few of the more interesting new volumes about to hit the bookstores:

The Sound & the Fury (John Wiley & Sons)—In this pleasantly biased, highly readable history of Canadian broadcasting, Warner Troyer amply documents his charge that “We’ve the hardware, but never have had the will and the wit to make our radio and television services work effectually against the continuing isolation and fragmentation of the Canadian psyche.” His heroes are the individual broadcasters; his villains the institutions they work for—and the contest between them is constantly being won by “the water torture of bureaucratic memo-writers.” He tells some delicious anecdotes, including the story of how a Montreal law professor named Pierre Trudeau very nearly took Laurier LaPierre’s place as the host of the fabled This Hour Has Seven Days.

Man of Law: A Model (Western Producer Prairie Books)—Regina lawyer Morris Shumiatcher has compiled the most comprehensive Canadian attempt to isolate and define those rare qualities that combine to

make great lawyers. It’s a witty and literate volume sparkling with such observations as “It has been my experience that self-interest is the astringent that most effectively restrains a client from an excess of zeal.” In a typical sally, Shumiatcher recounts the story of a Saskatchewan tax-evader who stood up at the end of his trial to declare: “As God is my judge, I am not guilty.” To which the presiding judge replied: “He is not. I am. You are.”

Trivia: Inconsequential hut Irresistible Facts About Canada by Paul Russell and Robert Jeffrey (Gage)— For sheer mischief it’s hard to beat this zany compilation of obscure facts and fancies. Where else could you find out that beavers work only six weeks a year and that the world’s largest frog was found in New Brunswick and weighed in at 46 pounds? Or that poet Leonard Cohen can sit still and think for 16 hours a day.

I recommend two other, slightly less recent books: Dawn Without Light (Breakwater), a magically evocative chronicle of the Smallwood era in Newfoundland history by H.L. Pottle. It provides an essential guide to the strange politics in which Brian Peckford simmered up. The most moving autobiography currently on the market is Samuel Pisar’s Of Blood and Hope (Little, Brown), which miraculously manages to trace through the prism of one fascinating life the rise and fall of our civilization. 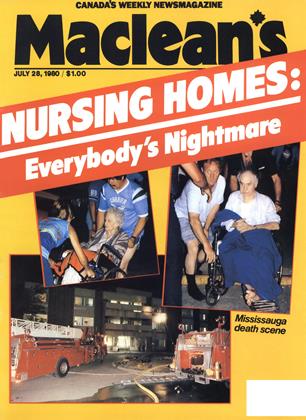