When the girls on the fashion page slip into mohair bras and black garbage-bag dresses, don’t panic—The Clichettes (Louise Garfield, Janice Hladki and Johanna Householder) must be in town. The basse-couture triumvirate dons wigs, bikinis and wraparound boats in their satirical revue, Half Human, Half Heartache, which is about to start a back-by-popular-demand summer season at a downtown Toronto country-and-western bar with cultural pretensions. Lip-synching their way through such hurt-girl staples as I'm Sorry, the trio has whipped up a hilarious sci-fi confection whose hard-edged fluff also tickles feminism’s funny bone by punch-lining the society that produced Miss Universe and summing up their independence as women performers in their signature number, You Don't Own Me. “We’re definitely not into imitative nostalgia,” says Hladki.

ttldo not go to bed with men for monley. If I did, then I most certainly would not be living in this place,” wailed former good-time girl Christine Keeler, 36, whose undercover escapades involving War Minister John Profumo rocked the British government in 1963. “I haven’t a penny in the world. You could say I have reached rock bottom,” Keeler told the Sunday Mirror last week, as she faced eviction from her shabby $380-a-month apartment in

west London. Though Keeler now lives on a $135 weekly social security cheque and $70 a month from her second husband, her early-’60s cohort Mandy RiceDavies is said to be doing quite well for herself in Israel, where she owns a string of nightclubs. “I have undoubtedly come off worst,” says worldweary Keeler. “Sometimes I get rather dispirited and pop down to my local for a drink but end up getting smashed. It’s the only way to anesthetize myself from this zombie-like existence.”

The question dominating the Washington gossip mill these days is “what were Jacqueline Kennedy Onassis and Maurice Tempelsman doing in an 18th-century South Carolina church?” It seems that for the past 18 months the former First Lady has been resting comfortably on the portly arm of American multimillionaire Tempelsman, who

reportedly owns large chunks of Zaire and heads one of the world’s largest mineral consortiums. The couple’s lowkeyed affair was revealed last week by Maxine Cheshire of The Washington Post. Cheshire detailed a trip the couple took last May on the Tempelsman yacht, which sailed from Savannah, Georgia, with a crew of two en route to Fort Lauderdale, Florida. Despite the church pit-stop, wedding-bell forecasts are a bit premature since Tempelsman is married, with three children. He told Cheshire that he is not contemplating a divorce at this time.

{flJ^e’d like to finish the climb next WW year—with permission,” said a landbound Gerry Banning, 34, following his unsuccessful attempt to climb to the 335-metre level of Toronto’s CN Tower last week with companion David Smart, 17. Tired and disillusioned by the monotony of hand-over-hand up a rope, the two adventurers descended after reaching the 240-metre level amid muted opposition. After being cautioned and released by the police, Banning admitted disappointment: “I’d

heard that breakfast at the top of the Tower was special and hoped we could get in without reservations.”

Toni Tennille has jumped the Captain’s ship in midstream to steer her own course to fame and fortune. Having shed her bangs and trying to do the same with her bopper-appeal, the 36year-old entertainer admits: “I can’t be cute for the rest of my life. Cute isn’t attractive when you’re 40, and I’ve always felt like a sophisticated woman.” The finished product will be on view this fall when Tennille enters a new venue as host of her own daily daytime talk show. Meanwhile, the Captain, Daryl Dragon (who has thrown away his hat in his personal effort not to be cute), is moving behind the scenes. Says solo Tennille: “Dragon will be helping out in

the musical numbers but mostly he’s getting into other things, like trying to write film scores.” Although love is still keeping them together, Tennille admits that it is the pair’s mid-career switch that will keep them working. After all, “It’s hard to boogie when you’re 50.”

The virtues of black womanhood have been extolled in ditties as diverse as the Rolling Stones’ Brown Sugar and Eubie Blake’s If You've Never Been Vamped by a Brownskin, You 've Never Been Vamped at All—both prehistory to a 19-year-old. But once-and-future premed student Tenita L. Jordan is sashaying and singing Blake’s 1920s tunes along with a dozen other performers in the touring production of Eubie! now playing in Toronto. “I have a passion for that era,” says Jordan. “The music and you come together. It’s more melodious than today’s music.” While Jordan dons ’20s gear and bright red lipstick and nostalgically returns to her grandparents’ days, Blake still has enough energy, at 97, to keep most youngsters eat-

ing his dust. At a recent ceremony at Nashville’s Fisk University, Blake and Stevie Wonder were both awarded honorary doctorates in humane letters, and Eubie has fulsome praise for little Stevie: “I like your voice, I like the way you play and I like your music.”

Iot long after Montreal-native Philip Rambow left Canada in 1973 to go to England, the singer/songwriter entered history as one of The Winkies, a Londonbased pub rock band which lasted longer than most, recorded an album, worked with the legendary Brian Eno and became a legend itself. “No one tried to make the Winkies legendary. It wasn’t that difficult to do,” says Rambow, who is now in the midst of a North American tour, three months after the release^Mft^. here of his first solo

album and the formation of hisband,The Debonaires.Now a streamlined,plaintive rocker, Rambow was eerily prophetic in penning a lament for the late Sex Pistol, Sid Vicious, Victim, including the line “There’s blood in the bathroom,” which was written before the messy death of Vicious’ girl-friend Nancy Spungeon. Commenting generally on his songs, Rambow admits, “I’m not a fan of amorality. That’s a real dangerous fashion. I’m really impressed by London East

End ethics — loyalty, courage, honesty and things like that.”

British techno-rockers Genesis completed their annual tour of the colonies last week after dates in Edmonton, Calgary, Toronto, Ottawa and Montreal. Though the trio’s average age is somewhat over 30, the 12-years-together group continues to draw out juvenile boppers. “It’s great that people can like The Clash and like Genesis as well,” says keyboardist Tony Banks. “That way it doesn’t have to be Us versus Them.” Though the golden-oldie band travels complete with wives and children in sensible shoes, Banks sees nothing conservative about their latest platinum effort, Duke. “Our audience has followed us down some strange alleyways,” he says. “You’ve got to be courageous and play what people don’t want to hear.”

Joe Clark, the man from High River, Alta., who left there shortly after graduating from high school in 1957, planned to spend Dominion Day weekend travelling memory lane. High River High School (now Senator Riley High School), where Clark got his education, was throwing a four-day reunion for the 2,000 former students who attended classes between 1912 and 1969. Historical displays, airplane tours, barbecues, class photos, band concerts, a Freshie parade and a banquet with Clark as a speaker were on the agenda. Jim Howie, a classmate turned local fertilizer dealer, recalls that student Clark won a Rotary Club trip to Ottawa which turned his mind to federal Conservative politics. “But there are lots of other well-known people from High River,” adds Howie. Among those invited to the reunion: Alberta Supreme Court Justice Herb Laycraft, writer W.O. Mitchell (a former teacher), Ray Watrin of the Montreal Alouettes and CBC Marketplace host Bill Paul.

In 1980 it’s okay to be a number, if you live in Minnesota. The Minnesota Supreme Court recently ruled that Michael Herbert Dengier of Minneapolis may apply to change his name legally to 1-0-6-9, provided he spells it out in words: “One Zero Six Nine.” Dengier has been referring to himself numerically for years, since he feels the digits have a “personal significance” to his life. However, in 1978, when Dengier attempted to have himself mathematically monikered, a lower court rejected his request as “dehumanizing.” One Zero Six Nine’s only problem? Acquiring a listing in the Minneapolis telephone directory that will mark him as more than a page number. Edited by Maureen Piercy 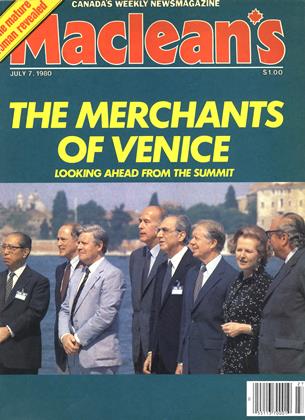