Parry Sound deals in suntan lotion, ice cream and, this summer, some of the cream of the world’s classical musicians. Where loons and outboard motors have always been the common notes, cellist Janos Starker, mezzo-soprano Judith Forst and operatic comedienne Anna Russell, among others, are adding a new sound of summer. Clearly, something unusual is in the works. Anton Kuerti, Canada’s leading piano virtuoso, is at it againbringing the mountain to Mohammed. Kuerti is transporting some of the

world’s finest music to his doorstep— another effort by this strange, obsessive man to bend the universe to conform to his personal standards.

Among Kuerti’s many concerns about life on planet Earth is the over-commercialization—and consequent bigness—of the music business; he is also a committed environmentalist who would like to help heal the rift between man and nature. What to do? Hold an international-class summer music festival in a community where the largest suitable hall seats only 450 and against a back-

drop of the scenery that inspired Tom Thomson. The “Festival of the Sound,” which runs until mid-August, presents some 20 events with international and Canadian musicians performing and offering master classes. For Kuerti, this is just another episode in a career crammed with similar ventures—with idealistic crusades, with disillusionment, with personal artistic triumphs.

Small and slight, with flyaway brown hair (in wispy contradiction to the dauntingly clear blue eyes), Viennaborn Kuerti is recognized in Canada “often enough to be flattering without being disturbing,” he acknowledges. “Anyway, I’m here to stay,” he warns, discussing his adopted country over a cup of herb tea in the womb-like, corklined studio of his Toronto townhouse. His roots are here now, he explains— including his wife, Hungarian-Canadian cellist Kristine Bogyo, their threeyear-old son, Julian, the lakefront property near Parry Sound and this house. To reach this back room, the pianist’s inner sanctum, you have to come through the long narrow living room (dominated by a massive East German grand piano absolutely heaped with books, records and papers), past the many shelves of art books and musical scores, the eclectic selection of graphics, paintings and a large SMOKING PROHIBITED poster; past the muddle of Julian’s toys; past the gorgeous Julian himself with his amazing pools of blue eyes. Here in the back-room studio is another grand (Kuerti owns four pianos), a battered Steinway, on which the pianist practises, often more than eight hours a day.

It is a classic Canadian irony that, being used to lamenting the dearth of genius in our midst, the country fails to recognize the real thing when it finally arrives—like Kuerti back in 1965, unobtrusively taking up the position of artist-in-residence at the University of Toronto. There should have been a splash in the media—at least if he’s anywhere as good as the experts claim: “A creative intellectual giant of a musician, one of the top half-dozen pianists in the world today,” says Eleanor Sniderman, whose recordings (on her Aquitaine label) of Kuerti playing all 32 Beethoven sonatas moved international reviewers to wallow in superlatives. Many designated it the finest rendition of the monumental cycle ever recorded.

But Kuerti was already well known to inner circles of the international music world long before the Beethoven release. Of a Schumann recording made in the early ’70s, High Fidelity magazine wrote “unsurpassable . . . stunning . . . one is chilled by the sheer prowess of the playing.” The New Records went so far as to suggest that if there were an Olympiad for recordings of this work,

“Arthur Rubinstein and Vladimir Horowitz would have to fight it out for the silver and bronze medals. Kuerti earns

Faubion Bowers observed in The New York Times a few years ago, “a major pianist can play consistently like a miracle and still not receive accolades commensurate with his ability. Anton Kuerti is such a pianist, a supernova whom, so far, only musical astronomers are charting.” Certainly, Canadians are not comfortable with the idea of stardom (let alone “supernovas”), and

Kuerti does have that disturbing quality of volatility, unpredictability: one minute, those blue eyes are boyish, eager, curious, warm; the next, they’re intense, threatening.

Technically, he’s not Canadian. He was born in Vienna in 1936 and arrived at age 4 in the United States, where his parents fled from Hitler’s Europe. Because he still performs there so often, he retains his American passport to avoid bureaucratic difficulties over visas and work permits. But in all other respects he considers himself Canadian. It was the pianist’s conscientious objection to the Vietnam War (long before it became fashionable), and refusal to support it with his taxes, that brought him to Canada in 1965. His stubbornness affected the shape of his subsequent career—American pianist Peter Serkin once suggested in a New York Times article that if Kuerti had only shut up about Vietnam, his career would have shot to the top. Another colleague says, “He sent petitions, picketed McNamara and generally carried on the kind of activities that are just not done in the arts community. He was black-

listed in many of the major summer festivals where he used to teach and perform.”

“Probably he cut himself off from certain opportunities,” agrees Toronto radio station CJRT-FM musical director Paul Robinson. After Kuerti won the star-making Leventritt Award, explains Robinson, “he was making the rounds of all the major orchestras; then he came to Canada and hasn’t had the same kind of exposure since.” Kuerti is philosophical about it all: “People were a lot more stuffy back then; the hippie

revolution had not started; my various idiosyncracies—vegetarianism, no tie and so on—irritated those controlling the concert world.”

Clearly, Kuerti has found he can’t mind his manners and stick to his principles at the same time. He is driven by a fierce sense of responsibility which seems to force itself into all corners of his life. It makes him a vegetarian: “I

think people should take ultimate responsibility for what they do, for how they live. If they want to eat meat, they should be willing to slaughter the animals themselves.” It makes him picky and insistent about musical standards. Steinway once prohibited Kuerti from using its pianos in major performing halls after he wrote an article for a piano technicians’ magazine, criticizing Steinway on some technical point. But the company backed off when he threatened to sue. Kuerti will turn and glower at persistent coughers during performances, and if that does not work he may stop in mid-arpeggio, walk off the stage and only continue when the offender has agreed to leave—as audiences in both Vancouver and Toronto will recall. And about three years ago in the Vancouver Island town of Duncan, he startled some noisy youngsters by shouting at them in the middle of a concerto. “If all the circumstances are right and the performer is in good spirits, a really beautiful experience can happen—both for the performer and the audience,” Kuerti says. “If I feel the prerequisites for this happening are violated, I’ll try to do something to change it.” Not that the man is a grim reforming zealot—he keeps his equilibrium through a boyish sense of fun. Kristine complains that there’s no picnic table, so Anton sets up a stepladder and happily balances plates and glasses on the rungs.

Kuerti has tried to implement his changes in the Canadian music scene. He has organized concert series with low prices in smaller halls and has gained exposure for high-quality but little-known Canadian talents. The Northstars series in Toronto, for example, has become a major vehicle for top Canadian performers. Starting four years ago as the off-shoot of a series of Schubert concerts Kuerti organized for the CBC, Northstars this coming season will feature a full-scale opera, Mozart’s Zaide, with Canadian soprano Rosemarie Landry. Despite the series’ expansion to a major hall last year, it is being moved back this season to a school auditorium—part of Kuerti’s crusade against bigness. He claims that the greed of managers and the consequent increase in performers’ fees has created a vicious circle forcing local sponsors to use halls that are too big for real musical communication. “I feel that when the administration of the arts gets completely out of the hands of the musicians, there’s a danger it becomes too oriented to what sells.”

As much as they admire his organizational efforts, some of Kuerti’s associates wish he would conserve more of his energy for his own playing—and let somebody else lick the stamps and raise the funds. Even Kuerti agrees he would

like more time, especially to do more composing, and has promised himself to cut back.

Yet Kuerti himself has no regrets. He thinks he has been phenomenally lucky, that he has found the good life. And, standing with him and Julian on the high rock bluff behind his cottage and gazing out over Georgian Bay, it’s hard to argue. After all, how do you measure success? “Success has many different aspects,” observes the pianist. “The most meaningful one is to convey an intense artistic, human message to a person, to help that person change him-

self and become a greater person, more sensitive and more conscious. If you can really help one person at every concert to achieve this, you are successful.”

But dusk is closing in, and Kuerti wants some time to practise. Back at the cottage, Kristine is curled up on the living room couch with a book. The room is vast and high-beamed like an ancient manor hall, a large stone fireplace at one end and windows overlooking the water. Kuerti plays an elegant, shimmering Chopin étude, while the sound of a loon crying reminds us where we are. 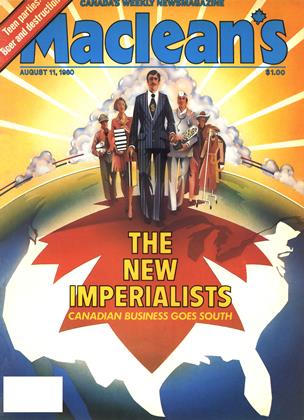