decided to leave behind two revolvers— a Webley .38 and a Lincoln hammerless .32. “To me, weapons are dangerous things and I never have liked having them around,” he says. “I turned them in and promptly forgot them.” Taft might logically have expected his firearms to end up in the melting pot at Manitoba Rolling Mills, where hundreds of similar weapons handed in by owners or their widows are rendered forever harmless. The two guns did make it as far as a police gun storage vault at Hartford Avenue in Winnipeg’s north end, but their ultimate fate has set off an internal police investigation unlikely to end until late this month.

In late June, it was discovered that Taft’s gun had disappeared from the storage depot and had been re-registered. A cursory inspection showed other guns were also missing, though no one was sure how many. An RCMP computer in Ottawa is now checking serial numbers and registrations of 6,000 weapons, supposedly in Winnipeg police hands, to find out how many have been spirited away. Many of the guns were handed in during a 1978 amnesty, while others had been confiscated from criminals. So far, police and the Crown have refused any detailed comment on the case of the missing guns. Crown Attorney Wayne Myshkowsky says a full audit of the weapons is still underway. “All I can say is that the local media are making a mountain out of a molehill,” he said. “At the moment our investigation focuses on two people.”

It is known that theft charges were prepared against two policemen in early July but Crown Attorney Myshkowsky ordered a freeze on legal proceedings until the investigation is complete, and the pair were assigned to other duties. Meanwhile, police have raided the premises of two gun dealers and checked several others. Those questioned are understood to have included a civil servant and an RCMP officer. But Lew Martynec, founder of the Association of Automatic Firearms Collectors and Shooters, says the number and fate of the missing weapons may never be known: “Sure you can trace the registrations and serial numbers of restricted fire-arms with a computer, but that only covers revolvers and automatic rifles. What about all the nonrestricted weapons that could be missing? It would make more sense if the police ran ads in the local papers asking everyone who’s handed in a gun since the 1978 amnesty to come forward and give details. The present method makes no sense.”

And though the case of the missing weapons may cast a shadow on the Winnipeg police force, according to one source familiar with the investigation this should not prove a great surprise: “People are always phoning the police to ask them to pick up and destroy unwanted weapons. If the policeman is a private collector, he’ll sometimes offer to buy the weapon, then register it in his name. It may seem unethical, but it’s gone on for years.” 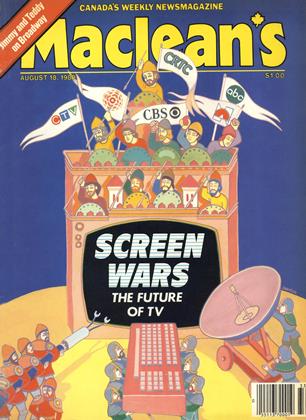