It could be argued that not since the ’20s, when Toronto served as a drop-off point for smuggling copies of James Joyce’s contraband Ulysses into the United States, has Canada figured more strategically in an Irishman’s career than it has in Chris de Burgh’s. In 1975, as an unknown solo opening act, the singer/songwriter was less than warmly received by a heckling Montreal audience who just couldn’t wait for the North American debut of headliners Supertramp, other foreign performers whose success on these shores has foreshadowed acceptance south of the border. However, now de Burgh can sit in Toronto, where he recorded his fifth album and recently spent four weeks rehearsing for upcoming tours of Europe and Canada, and talk assuredly of what this country means to him. “Canada is, album-wise, my strongest market,” he says, with Canadian sales of 200,000 behind him. “It’s a strong base, and if you’re going to work you might as well work somewhere where you’re known. There’s no point going to Guatemala.” Had he, in fact, chosen to break out of Guatemala, it would have been consistent with an errant life that started in Argentina in 1948 as Chris Davison, the second son of a British father doing intelligence work for the British Foreign Office and an Irish mother, from whose ancestral tree he picked “de Burgh.” Following stints in Malta and Africa, his parents moved to southeastern Ireland in 1960, purchased a 12th-

century Norman castle and turned it into a hotel. De Burgh attended Marlborough public school, and studied English and French at Trinity College, Dublin. His decorously selfcontained manner reflects a tony background and, though his work is known for its abandoned lyricism, he himself appears eminently sensible, stocking the windowsill of his Toronto hotel room with Tetley tea and acacia honey and keeping a skipping rope on hand to exercise his neat, elfin physique.

Orderliness, likewise, informs de Burgh’s professional habits. Whether deliberating over his stage wardrobe— something “faintly memorable” but not “overbearing”—or practising with his band, four of whose five members are Canadians, to hone his concert program to clockwork precision, he leaves little to accident. One might guess, based on the fact that he has been especially popular in Newfoundland, where his fifth Canadian tour kicks off later this month, that de Burgh’s success has something to do with shared Celtic roots, but such an explanation is incomplete. When it comes to selling records, bonds of the spirit are nothing without heavy radio play. While a single from his first album topped Brazilian pop charts in 1975, it was Spanish Train, released in 1976, enthusiastically played by CHOM-FM in Montreal and followed by an intensive cross-country promotional tour (100 interviews in five days), that marked the beginning of the

de Burgh phenomenon in Canada. Quebec record-buyers have been noticeably disposed to the fulsome musical visions of groups such as Supertramp, Genesis, Styx—and in that province alone Spanish Train and Other Stories, containing the very popular allegorical narrative about God and the devil playing poker for the souls of the dead, sold more than in all of Great Britain.

“People like me didn’t stand a chance,” says de Burgh, describing the British music industry in the mid-’70s and suggesting what it must have been like during the days of punk rock’s in-

cipient swell to be the author of anomalies such as Satin Green Shutters with words such as, Where your dreams are, put your hopes, you know they will not fail you. Still strongly committed to the craft of songwriting, he considers much new wave music “a very crude weapon to beat people over the head with,” and for him the London scene remains “alien.” Though de Burgh lives in Ireland with his wife, an artist in stained glass, he says, “I feel I have much more in common with what’s happening over here musically. I look at the American Top 20 and every band is the

kind I buy, you know, Jackson Browne, The Eagles.” With his latest album, Eastern Wind, released in July, he is aiming “full tilt at America.”

To that end, Eastern Wind departs from the lavishly produced minstrelsy that has characterized de Burgh’s output so far. For the first time there is no orchestral backup. While themes con-

tinue to be romantic—love, travel, imprisonment and mortality—there are also a couple of dance tunes. Shadows and Lights is a Saturday night rocker; Tourist Attraction an outright rhumba. And though de Burgh flatly states, “I can’t stand people like the Tom Robinson Band and all that pseudo-political stuff,” the title track might even be construed as a reflection on the Iranian crisis. Dave Margereson, who, as an executive with A&M in England, was responsible for signing de Burgh to the label and who now manages him (as well as Supertramp) from Los Angeles, summarizes: “Eastern Wind is more accessible musically; more obvious, if you like.”

Despite Margereson’s attentive guidance, the support of A&M Canada’s thoroughgoing promotional efforts and an undeniable foothold on the Canadian market, there are still some who hear the name Chris de Burgh and scratch their heads, “Crisp Berg what? Crystal who?” The new album may rectify that. About the devotees who have been buying up the albums and turning out for the concerts, one can only speculate. De Burgh himself offers no specific profile but some clues when he says, “I get a lot of letters, very, very personal letters, connected to death or matters of a spiritual nature. People write to say, ‘My girl-friend died in my arms on Thursday and I want to tell you that our favorite song was Lonely Sky.’ Or a girl writes, ‘My father died last year and I feel my link with him is through your songs.’ ” 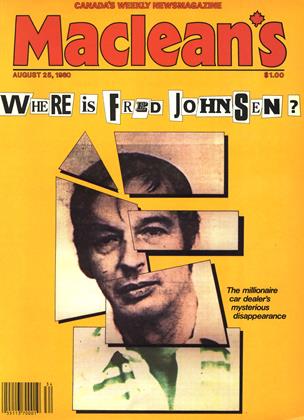