"Those are weasel words.” The audience in the small hall in White Lake, Ont., listened closely and approvingly as a fellow townsman spoke up. “Whenever the government says it will not do something, it always does the opposite. Can you explain to them that the public

can’t accept weasel words when they’ve lost so much credibility?” Just outside town several small drill holes nerce the granite of the pre-Cambri a shield, scars from earlier geological studies. It was toward those small holes that the townspeople directed distrustful eyes at a public meeting last summer—for it was there that the Atomic Energy of Canada Ltd. (AECL) wanted permission to do research in its effort to solve an oppressive dilemma: the disposal of radioactive wastes from nuclear power plants. z

In Canada, no permanent nuclear g garbage dump will open for business z until the 21st century. Yet public resisg tance to research into the methods of £ disposal is already strong—so strong ï

th it, according to a key report released last week by the Ontario legislature Select Committee on Hydro Affairs, the whole multimillion-dollar program is in danger of foundering. This resistance stems from far more than a natural repugnance at the notion of life beside a nuclear dump. It comes from deep distrust of the AECL, the Crown corporation charged with both the promotion of

nuclear energy and the disposal of its wastes. And while critics charge conflict of interest, many townspeople react to AECL assurances of safety with the thought “weasel words.”

Ontario MPP Jim Foulds, vice-chairman of the select committee, is not alone in tracing today’s dilemma to yesterday’s “unwarranted natural arrogance” on the part of the nuclear industry. “They proceeded with nuclear energy without knowing how to deal with the waste program,” he explains. Despite a rich variety of theories— shoot the stuff into space, bury it under the polar ice cap, dump it into a volcano—no absolutely reliable solution has been found. Wastes have been dumped into the world’s oceans for years, on the assumption that they would be diluted into a harmless concentration. Now the international community of nuclear scientists has singled out deep burial in stable rock formations as the more promising answer. It is an instinctively comforting notion—hundreds of metres of bedrock as a buffer zone—but neither the U.S. nor Germany, although 10 to 15 years ahead of Canada in the search, has been able to settle on a site. “In the U.S. we have had a helluva time finding one of these sites in 35 years,” Califor-

nia Energy Commissioner Emilio Varanini told the Ontario select committee. The main problem with geologic disposal is finding a rock formation where groundwater will not penetrate and carry radioactivity back to man’s world.

“In a way, this is a social issue that’s almost archetypal of our era,” says David Foster of Energy Pathways, a group committed to improving communications in the nuclear debate. “After using up the good part of the resources, we’re faced with the problem of the part we can’t use”—leftovers such as pesticides, acid rain and all manner of industrial swill. Or, in this case, one-metre zirconium rods packed with uranium oxide pellets which, once a small fraction of their energy has been flashed across southern Ontario as electricity, are no longer useful. The rods are placed in large cooling pools of water near the reactors, safe enough as way stations even for most nuclear critics. But these eerie, motionless pools take in a total of 1,700 lb. of waste every day from Ontario’s half-dozen operating reactors (Canada’s only other reactors, in Quebec and New Brunswick, are not in use yet). By the year 2000, provided no new reactors are built, that will amount to 80,000 tons—enough to fill a Canadian football field between the 15-yard lines to a depth of 45 metres. A solution must be found so that this refuse does not become the legacy of generations— that is one of the few points on which nuclear critics and the industry agree.

The uranium is used for about one year in a reactor, but as waste it throws off high levels of radioactivity for about 600 years, fading to a level that, in 17,000 years, equals its original ore bed. But those rays remain hazardous for a quarterto half-a-million years. Apart from inducing cancer, the tasteless, odorless invisible rays can cause birth defects in the unborn and mutations in descendants of people exposed.

Canada’s waste-management program was drawn up in 1978 and called for the AECL to prove, by 1980, the assumption that nuclear wastes can be safely sequestered in deep hard rock such as granite. A full-scale repository was to be ready for use by the year 2000. In their laboratories in Whiteshell, Man., and Chalk River, Ont., AECL scientists have pressed ahead with experiments designed to find an impermeable “coffin” that will resist corrosion for hundreds of years. In the field, geologists are drilling and studying the cracking patterns of deep granite formations called plutons, while other specialists are trying to plot the flow of groundwater—a study in its infancy. But the failure of science so far to solve the waste puzzle has led Sweden, West Germany, California and nine other

American states to curb nuclear expansion until the problem is finally solved.

Despite this blanket international failure, however, Archie Aikin, a former vice-president of AECL, once declared:“Wastemanagementis not a technical problem, but a public relations problem.” Critics of the nuclear program see such optimistic remarks as a source of the Canadian public’s mistrust of the people in charge of nuclear waste. Says Norman Rubin, director of the independent organization Energy Probe: “It’s in their [AECL’s] interest as promoters of the nuclear future to make this problem go away as quietly and as soon as possible. And that’s not the same as having it in your interest that the problem be solved properly.”

The problem of trust has not only delayed the program by several years, it has also caught the waste-management program in a classic Catch-22. “The population says you have to prove it’s safe before you can drill; the scientists say

you have to drill before proving it’s safe,” explains Egon Freeh, the director of public relations for AECL. “All we want is to drill some holes in the rock, do some research and go away.” In White Lake, the township council finally agreed to let the testing go ahead, but fear remains that it might indeed be AECL’s foot in the door for a dump site — a reaction first seen in Madoc, Ont., when public hostility forced AECL to withdraw a drilling operation in 1977. Just last spring in the Northwest Ontario town of Atikokan, demonstrators protested against a similar drilling research project, but the town council permitted the work to proceed. Then, in July, the council at Mulcahy Lake, also in Northwestern Ontario, rejected an AECL request to drill nearby.

The public was given a disturbing glimpse of the waste program through the eyes of independent authorities last winter at the Ontario select committee hearings. In perhaps the single most powerful indictment of the program,

Christopher Barnes, past president of the independent Canadian Geoscience Council, called the effort badly conducted, misdirected and ridiculously underfinanced. American experts said the program’s glaring weakness is its lack of an over-all guide to safety that would help the public understand the risks involved. Gordon Edwards, a critic of the nuclear industry and chairman of the Canadian Coalition of Nuclear Responsibility, was one of many speakers to deplore AECL’s apparent conflict of interest. Others pointed out that AECL’s waste-management budget of $15 million for 1979—an amount allocated by the federal government—was less than half of Switzerland’s, and that only a third of that was used for geoscientific research. Meanwhile, last spring, the province’s Porter Commission investigated the entire nuclear energy issue and produced its final report, calling for a moratorium on the construction of reactors if the waste

But the select committee’s report last week called credibility the most serious weakness in the program, since “the technical solution . . . must, ultimately, be acceptable to the people of Ontario.” A landmark on the long road of public debate over nuclear wastes, the report concludes that the AECL, despite its efforts, could never have sold itself to the skeptical public given its “one-sided, overly positive and broadly pronuclear presentation of information.” Instead, it recommends that a new agency be established by the Canadian and Ontario governments to take public responsibility for both the program and a new, open approach toward the public.

Even if these and many other recommendations are soon wedded to the Canadian program, a fundamental question will remain unanswered for years to come. As Norman Rubin puts it: “The question is not whether AECL or Canada has the expertise to solve the problem but, does the world have the expertise? And that leads to another question: is the problem soluble? Nobody has the answer to that one yet.” 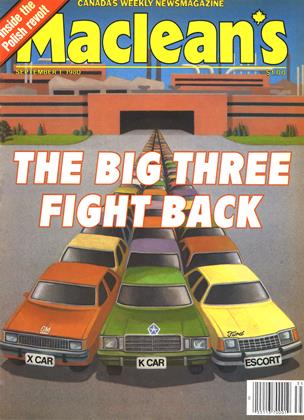