Poor David Helliwell. It should have been his finest hour. The move he had hoped would convert the British Columbia Resources Investment Corp. (BRIC) into one of Canada’s leading natural resource companies, providing a plump nest egg for its thousands of B.C. shareholders, has instead seen Helliwell described by analysts and observers as a fumbler, a procrastinator, a spendthrift. BRlC’s longawaited announcement last week that it intends to invest its huge cash reserves of more than $300 million, plus an even greater amount in bank borrowings, to purchase majority control of Vancouver’s Kaiser Resources Ltd., largest coal producer in Canada, has left Helliwell, BRlC’s president, appearing to many B.C. residents like the Wizard of Oz— without his magic.

every B.C. resident a stake in its fortunes—BRlC’s moves over the past two years, under the direction of “wonderboy” Helliwell, have been attacked first for being too timid and now for being intemperate. Last year, when BRIC purchased a 14.4-per-cent block of shares in MacMillan Bloedel Ltd., the Vancouver forestry giant, for $107 million, the investment community described the move as mousy and feeble. Now, the Kaiser deal, they say, is excessive and far too expensive. Helliwell, it seems, just can’t win.

Once the dust has cleared and the current hissing of disappointment has subsided, Helliwell’s move may well win back his friends. If BRlC’s offer is successful—and at $55 a share, it is expected Kaiser’s shareholders won’t be coy about tendering—BRIC will be Canada’s largest coal producer, assured of eager buyers in energy-hungry Japan, and may be on its way to fulfilling many a B.C. pipe dream of being to coal what

Helliwell (left); Kaiser with portrait of grandfather: Wizard of Oz without magic

Alberta is to oil and gas. “The fact is,” says Vancouver analyst Tony Hepburn, an outspoken critic of BRlC’s track record, “even if this purchase has been ineptly handled and, I believe, too costly, it’s still an excellent property for BRIC to acquire.”

Gliding elegantly in the background, and, for the second time in barely six months, the real winner in the affairs of Kaiser Resources, is 38-year-old Edgar Kaiser, company chairman and grandson of the founder, who stands to make close to $50 million through the sale of his personal shareholdings, while retaining a lucrative contract to manage the marketing function under the new BRIC-owned coal operation. After securing an impressive capital gain of about $230 million for the company last February through the sale of Kaiser’s oil and gas properties to Dome Petroleum Limited of Calgary, Kaiser’s new deal with BRIC—though it has the effect of almost completely eliminating the once-strong Kaiser presence in Canada—is expected to give a zero-hour breath of life to the family-founded sister company in the U.S., the ailing Kaiser Steel Corporation of Oakland, Calif. With the $200 million it will gain by selling its 25-per-cent interest in Kaiser Resources to BRIC, Kaiser Steel—llth-largest U.S. steelmaker, though smaller than Canada’s Stelco, Dofasco and Algoma steel companies— is expected to be able to limp back toward profitability by 1981, instead of being forced to close down, as had been expected as late as last week before the sale offer.

Obscured in conjecture, Kaiser’s personal plans, meanwhile, remain a hot topic of business gossip both in B.C. and California. Though he took out Canadian citizenship earlier this year he has now sold his primary reason for remaining, and many wonder where he will roost. As for Helliwell, the lumps of coal that seem to lodge at the bottom of his stocking today will likely be heating the house tomorrow. 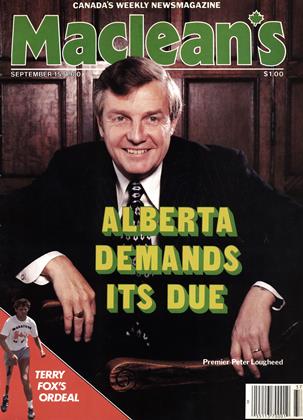