Cigarettes glowing in the shadow’s edge; cryptic messages passing between strangers; footsteps following footsteps on wet cobblestones; guns bulging under trench coats; high-powered cars racing across moonlit borders. Not scenes from a made-for-TV movie (although they may be one day), but acts from a real-life story of international intrigue by amateurs playing a dangerous game against professionals. After five years the saga ended with a new beginning for three young Czechs. Peter Stastny, his pregnant wife, Darina, and his brother Anton arrived in Montreal Aug. 25. Stars of the Czechoslovakian national hockey team with their brother, Marian, the Stastny brothers had defected with the help of the Quebec Nordiques, high-ranking officials in the federal government, the Canadian embassy in Vienna and countless anonymous “connections.”

“Had I known the dangers, had I known that I would be risking my life, I never would have done it,” Marcel Aubut, 32, president of the Quebec Nordiques was saying last week as he recalled the flight to Innsbruck, Austria, with Nordique Assistant General Manager Gilles Léger, the secret meetings in hotels and the race to Vienna. “It was phenomenal. People would not believe it if they heard the whole story. But it happened. We did it.” The whole story is not being told because, as Léger says, “The players are happy, they got their money [rumored to be $1 million each over five years]; the team is happy, they got their players. I had worked on getting the Stastnys for five years, so I got the rights to the story. I’ve heard from five publishers so far.” Nor will the whole story be told soon. “There were many people involved and we have to protect them,” says Léger. “We have to wait. Only time will make it safe to tell the story. Besides, we don’t want the rest of the teams to find out how we did it.”

Léger had been working on the defection since November, 1976, when he was with the Birmingham Bulls of the defunct World Hockey Association. He had been instrumental in getting Czech star Vaclav Nedomansky when he worked for the Toronto Toros of the WHA, and when he moved to Quebec

City he kept alive his dream of getting the Stastny brothers. “With Nedomansky it was easier, just one player. But with the Stastnys—we wanted all three, but Marian is married with three children and really couldn’t come—we had two and Peter’s wife.” The pursuit heated up over the past two years. The Stastnys played on the same line together, Peter at centre, Anton at left, Marian at right. They formed one of the most formidable lines in hockey and they were aware that Léger and the Nordiques were after them.

The Czechoslovakian secret service (STB) was also aware. Léger’s pursuit took him to Europe at least 10 times. When Marcel and I arrived at Innsbruck, the STB knew who we were.” Repeated attempts to spirit away the brothers failed. “We followed them to their tournaments in Italy, West Germany, Switzerland,” said Léger. “But always something would happen.” The most trying attempt came at the Winter Olympics at Lake Placid in February. “The security was unbelievable,” Aubut recalled. “Especially with the boycott

talk and the invasion of Afghanistan, the police around the Russian and Czechoslovakians were so thick we couldn’t get within 100 feet of them. But we got one of our people into the Olympic Village—past all the security. That was an accomplishment in itself.” Aubut’s eyes dance at the thought of the remarkable escapade he had lived. The key to the entire project, for him, was the support of the man at Carling O’Keefe, the owner of the Nordiques. “When I told them Gilles and I were going to try to get two Czech hockey players to defect, they thought I was crazy, but the president, Jim Taylor, said to me, ‘If there’s a chance, try it.’ Each month he would simply ask me, ‘How’s the European project?’ At times I had to tell him it looked hopeless, but he always said: ‘Keep trying.’ ”

The chance came in August at Innsbruck. The Czech national team was competing there for the Europa Cup. Through intermediaries, the Stastnys knew Léger and Aubut would be there. It was arranged that Darina would arrive on a charter bus with Czech fans. Léger and Aubut left Canada on Aug. 22. “This time the plan worked, bang, bang, bang, it was pure luck,” says Aubut. As the tournament went on, the brothers would sneak separately to hotel rooms to meet Léger and Aubut to negotiate details of the plan and their contracts. “They studied foreign trade at university,” smiled Léger. “They knew what they were worth. They didn’t exactly need an agent.”

changing tournament and travel plans at the last minute), they tried once more at Innsbruck. “The security again was tight,” said Aubut, “and the STB had staked out our hotel.” With everything going smoothly, a final-hour problem arose. “The kids wanted to play in the final game against Russia. We knew that would make it harder. If we got away during the tournament, their absence wouldn’t be noticed so quickly. But the Czechs were going to leave directly after the Soviet game. There would be two empty seats. They would start searching immediately,” says Aubut.

Weighing the risks, the brothers insisted on playing one last game against the Soviets, one last game with brother Marian. After the game, Léger and Aubut managed to get Anton, Peter and Darina into a car. They raced to Vienna and the Canadian embassy. “It got very dangerous. The guns were there. The embassy people really saved us,” Aubut shakes his head. “Look, this was more than sports. The Stastnys were a national asset, through hockey responsible for part of the nation’s image. This was like a victory by capitalism over communism.” On Aug. 25, the Stastnys arrived at Montreal’s Mirabel airport with their pursuers of five years. The brothers were now millionaires.

The brothers sat in the stands at Le Pavillion de la Jeunesse in Quebec City last week, after their first day with the entire Nordique team, their third week in their new home. Neither will talk about the “Nordique plan,” and only reluctantly of those left behind. “The money was not the big factor,” said Peter. “As players on the national team we had everything we wanted, money was not a problem. Czechoslovakia is not like here where everyone has a car, for instance. But we had cars.” For both of them, the main thing was the breaking up of their local team in Bratislava. “We had won the first championship for them in 60 years,” said Anton, his anger obvious. “But then the coach had no time for us, we practised alone. He started selling players to other teams, which is his right. We started to lose and it was over.”

The Nordiques, who finished 19th out of 21 in the NHL last year, hope it is just beginning for them. “They are extremely talented hockey players,” beams coach Maurice Filion. “They have all the abilities necessary to be superstars.” It could be a long and productive relationship. Anton turned 21 last month, Peter 24 last week. “If you were to compare them with an NHLer,” Léger says immodestly, “you’d say they were Guy Lafleurs.”

In their new roles as Nordique saviors, millionaires, celebrities and for Peter as father (Darina gave birth to

Katrina last week), they are adjusting. The hockey part might be the easiest. “When I walk in the old section of Quebec City, it reminds me of our home in Bratislava,” said Peter, looking away for a moment with a trace of homesickness: “Here it is the St. Lawrence flowing by, there it was the Danube.” 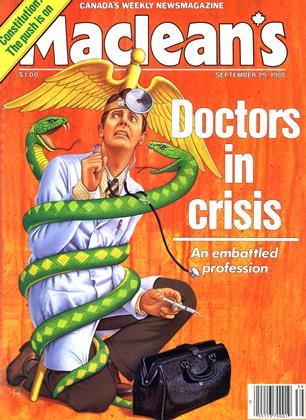