Over long business careers that had seen many an amicable deal washed down with hot morning coffee and warm breakfast rolls, this was to be an abrupt exception. The overnight fog entombing the rolling hills of Quebec’s Eastern Townships had not even begun to burn away in last Wednesday’s August heat when Robert Campeau climbed back into the waiting airport taxi and disappeared down the long drive of Kenneth White’s Georgeville country house, leaving the chairman and president of Canada’s largest trust company fuming over this 45-minute early morning intrusion which was to ruin his breakfast, his holiday andas he was to be saying a few hours later at his Montreal office—quite possibly his company as well. Later still, reflecting on the strange early morning meeting that could affect the fortunes of his own company just as profoundly, Robert Campeau, chairman and principal owner of Campeau Corp., sixth-largest property development company in Canada, seemed a bit surprised: “Ken White and I have been friends for a long time. I guess I didn’t expect him to hand his company to us on a silver platter, but I certainly didn’t expect him to be so hostile, so emotional.”

Last week’s sudden offer by Campeau Corp. to biry control of Royal Trustco Ltd. for $143 million through a general offer made to Royal’s nearly 9,000 shareholders came as a surprise to more than the company’s chairman. Even as White was galvanizing opposition to the

Campeau bid,conferring hurriedly in Montreal with fellow Royal Trust director and former chairman Conrad Harrington, and planning this week’s full meeting of the board, Canada’s financial community was abuzz with speculation. How could Campeau—a company that has seen violent swings in fortune over its 12-year history as a housebuilder and developer (which two years ago showed profits of scarcely $.5 million)—possibly afford to buy the largest trust companx-indeed, the sixth-largest financial institution, in Canada? Why not try for a smaller, more affordable trust company? Why not buy instead, as several other Canadian developers have already done, a resource company in mining or oil and gas? Or—posing the question raised by White himself—why should a “vital institution with a deep responsibility to almost a million Canadians who have entrusted their personal affairs amounting to more than $25 billion ... be allowed to fall into the hands of a single shareholder?” Campeau’s response is cool, almost cold. With seven of Canada’s 10 largest trust companies already controlled by family groups or single corporations, it is ridiculous, he says, to raise the spectre of ownership abuse. “Our com-

pany can greatly aid Royal Trust in two key areas—commercial property management and real estate investment by pension funds—otherwise we view Royal Trust strictly as an investment and wouldn’t interfere with management whatsoever.” As for Campeau’s ability to afford the deal: “Well,” smiles the chairman, “if we were able to convince the Bank of Nova Scotia to lend us the money, I guess they have faith in us.” With the battle lines drawn, it’s now an issue, on both sides, of faith, hope—and trust. 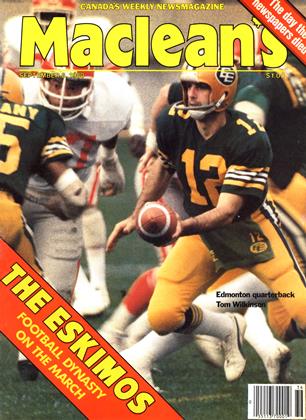