While Canadian hockey players are reviled in Europe for their penchant for violence and vulgar manners, skiers like Podborski and, before him, Ken Read are seen as perfect gentlemen, and downhill racing’s most articulate spokesmen. Even before his greatest victory, Podborski was featured on the cover of Ski Veit and much sought after for interviews in three languages about why the “not so crazy Canucks” have become the world’s best in a sport in which European nations, with 20 times the skiers and 10 times the financial resources, have not done so well.

This comes as a great disappointment to ski-mad Austria, which is as proprietary about downhill racing as Canada is about hockey. An alcohol-laden crowd of 30,000 stretched out 10 deep, like a ribbon of ants, along the twisting mountain face. When Austria’s Peter Wirnsberger, the eighth man down the course, finished one second ahead of the previous leader, Herbert Plank, the crowd howled with delight. The cheers turned to moans moments later when, starting 11th, Podborski’s first intermediate time was announced. The 23year-old, six-year world cup veteran was four-tenths of a second ahead of Wirnsberger going at a record-setting pace. He was still two kilometres from the finish, but they knew he had already won, barring a fall. Podborski finished in 2:03.76, ahead of second-place Peter Mueller’s 2:04.16. The result also solidified Podborksi’s lead in World Cup downhill standings.

Although Podborski thought he had lost time near the top of the course, everyone who saw him on television agreed that he was the best. Said Austrian star Uli Spiess, as he watched Podborski navigate the 3,520-metre course: “Nobody is as smooth. Look at those long turns and the way he keeps his body down. He’s the best technical skier in the world.” In training, only hours before the race, Podborski was

three seconds behind the leaders, and the Canadians were worried about how to make up the time. “You always wonder what sort of reserve is left,” said head coach John Ritchie. “Things weren’t going well at all and I didn’t know how the guys would react. It seems as if Steve used the power he gained at St. Moritz and Garmisch [where he won by large margins, too] to

stand at the start and shine on all the problems and then take off and win. It was a fantastic result.”

Although he considered his St. Moritz win to have been more difficult, Podborski was quick to concede that winning the Hahnenkamm was his greatest skiing achievement. “It’s one of the biggest sporting events in the world. It’s psychologically and technically challenging and I’ve crashed here

a few times. I’m glad that I finally turned out to be better than the course.” The victory laid to rest the short-lived myth that Podborski could not win without his good friend Ken Read feeding him advice. “I have a pretty good head,” Podborski said, “and you don’t get that unless you know what you’re doing. But I did miss Ken. All the racers did.”

Podborski won as he had at St. Moritz and Garmisch, after a string of unimpressive training times. Winning in training and then somehow caving in on race day had given the Canadian team a reputation as chokers. Podborski called it a new theory. “I want to know that I have something left when I go into a race,” he said. “If you’re going full-out in training you don’t have room to move ahead and it can be frustrating. Perhaps we’ve pushed too hard in the past. I’m just trying it out and it seems to be working.”

The only other racer to win three consecutive races in the past 10 years is the aging Austrian star Franz Klammer, who put together a string of nine wins in a row in 1975-76, 1976-77, while Podborski was skiing from the second and third seed. But this is 1981. “Steve is a superstar,” said coach Ritchie, after the Kitzbühl win. “He’s in a class all by himself, having won on the toughest courses we’ve ever seen, and by huge margins.”

It’s hard to see Podborski in his newfound role of superstar. Generous to a fault, his welcoming smile and endless self-deprecating jokes are commonplace on the World Cup circuit. If Read is the most respected racer for his opinions and knowledge of downhill racing, then Podborski must be the best liked of a much-loved Canadian team. “I think Steve will accept superstardom as a superstar in the Canadian tradition,” said Ritchie, as he watched an avalanche of journalists engulf his touslehaired protégé. “I can’t see him losing contact with the people who are his friends. He opens himself up to anyone he meets.”

It’s a long way from the 150-metre course at the edge of Toronto’s smoggy Don Valley Parkway where he learned to ski. Podborski, an engineer’s son from Toronto, now finds himself on the edge of untold wealth. Though amateurs, the best downhill racers can earn as much as a good professional hockey player through trust funds set up by their ski associations.

And of his own reputation back home, Podborski told journalists that maybe now he would be considered a star. “In Canada, you only count if you’re No. 1.” His parting shot, as he left the crowded press room for a round of post-race parties, was, “I guess I’ve got a lot to look forward to.” 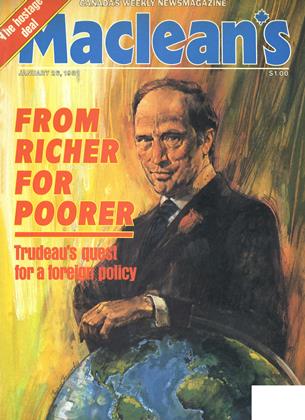