For a nation that during most of the post-war years took prosperity for granted, Canada at the moment seems to be in a curiously perilous economic state. In past recessions—and there's no question that we 're deep into one now— the politicians have always been able to justify their actions by preaching about the “trade-off" between inflation and unemployment, meaning how much growth produces what kind of price increases, and vice versa. The trouble now is that we have got both an abnormally high jobless rate and a rapidly climbing cost of living. No one, least of all the central bankers in Ottawa, seems to know how to get us out of the mess.

To try and assess exactly where the

Canadian economy stands and how it's likely to perform in the next 12 months, Maclean’s recently gathered a distinguished panel of economists and asked them to forecast 1981 trends. Here is a sum mary of their pi'edictions:

It was to be a mini-recession—that was all. Three, or at the most, four weak quarters, spilling just over into 1981, and then the recovery would be on its way. Six months ago, in the trough of the 1980 recession with no-where to go but up, the Maclean's Panel of Economists (see box) was predicting warming breezes of growth and expan-

sion—mild, but almost palpable. In the short interval since, however, even the most cautious optimism has sagged. Drought and crop damage; further OPEC oil price increases; the sharp turnaround in U.S. interest rate patterns; the October federal budget and, in particular, the National Energy Program (NEP) were key—and unexpected—developments that made all the difference. In the end, the performance of the Canadian economy in 1980 was far worse than expected.

Now, instead of recovery, 1981 appears bleak. Even though the year overall is expected to see some small growth in Canada’s gross national product (GNP), this will be small comfort to the average Canadian consumer.

The recession of 1980, so long in coming, is taking even longer to ebb away. The economists, who had so much difficulty in predicting when it would arrive, are finding it even harder to foretell its departure. “What we have developed here, led by the U.S.,” says John Graham, “is a ‘W-shaped’ recession. We seemed to be pulling out of the trough by mid-year 1980, and now we’re about to slide back into another.”

How long the new dip will last, no one can tell. International forecasting bodies such as the Organization for Economic Co-operation and Development (OECD), with 24 member countries, are calling for improvement in the Canadian economy by 1982—an outlook with which the Maclean's panel generally agrees. But much depends on the resolution of nagging ongoing uncertainties. “The most discouraging feature of 1981,” comments Douglas Peters, “is continuing, and higher, inflation. Even after five years of trying to bring it under control by strong monetary measures, nothing seems to have worked.” The same frustration is echoed by John Grant, although he and other monetarists continue to support the approach of the Bank of Canada that restricted money supply holds the key to strangling inflation.

JTH|he Maclean's Panel of Economists convened in December in Toronto .JL to discuss prospects for the Canadian economy in 1981. The eight members who meet twice a year represent a wide range of regional and philosophical perspectives. The members:

Other economists take the broader, though not necessarily helpful, view that much of Canada’s inflation lies outside the scope of the central bank. Says Gerald Angevine: “Higher energy prices, Canada’s lower exchange rates and higher prices in the U.S. passed through in imports—these factors will have a huge impact on Canada’s inflation rate in 1981.” “We have to remember that it’s not just Canada,” adds Clarence Barber. “What we’re seeing is a worldwide attempt to cope with the doubling of oil prices between 1979 [and] 1980. Monetarism is one method of coping—but, like World War I trench warfare, it’s having a far less conclusive impact than was hoped.”

Year’s average of chartered Measured against U.S.$ Housing units (including

The most damaging consequence of current Canadian —and worldwideeconomic volatility, says Barber, is the element of paralysing uncertainty that this creates. “People—individuals and businesses—don’t know whether to borrow or expand, because they don’t know what the future will bring.” It’s a vicious chain reaction. On the individual level, depressed consumer spending, which accounts for about 60 per cent of the Canadian GNP, lowers the heartbeat of the economy. In times of less volatile interest rates, consumer spending has been bolstered by vigorous borrowing. This trend is not only unhealthy in the long term, says Bernard Bonin, but clearly impossible to sustain in the face of higher rates expected to prevail overall throughout 1981. The result will be an increase in consumer spending of less than one per cent in 1981—“virtually stagnant” according to Marie-Josée Drouin. Nor will consumers receive any additional boost through higher wages, as over-all gains of 10 to 11 per cent will be all but wiped out by inflation for the second year in a row.

Business spending is adversely affected by the same doubts hanging over interest rates and the prospects for economic recovery. Business capital investment in 1981 is expected to keep only two or three percentage points ahead of inflation—a decline over 1980, while the decline in profits will be even greater. When companies and businesses stop spending money on expansion, upgrading and new technologies, the longrange effects can be damaging. Takeovers and corporate cannibalism replace new ventures. The wealth-producing base of the economy begins to atrophy. Jobs begin to disappear. That pressure leads in turn to “poor prospects for economic peace,” says Angevine, along with upward pressure on wages—adding yet another strain to the system.

One area of uncertainty that Canada can—and must—clear up in order to put an end to what Rotstein calls “Canada’s aimless wandering and lackadaisical lurching on the world stage” is the constitutional dogfight preventing meaningful progress in energy development. As a further deterrent to business capital investment, the NEP is harmful to the Canadian economy, at least in the short term, the panel believes—even if it brings long-range benefits to Canada through greater Canadian resource ownership. The Canadianization fund— the proposed general levy to finance a major acquisition by Petro-Canada— could even add half a percentage point to Canada’s inflation rate during 1981, Peters says.

In the meantime, there may be a variety of measures the federal and provincial governments—even the lending institutions—could adopt to help consumers and the economy at large through difficult times, although fiscal tactics, as Barber points out, are greatly hampered by the massive onslaught of inflation during a recession. The chief hope for Canada’s longer-term future may lie in learning the lessons of hardship. For if the difficult months ahead lead to greed, panic or inflexibility, the years beyond may be harder still. 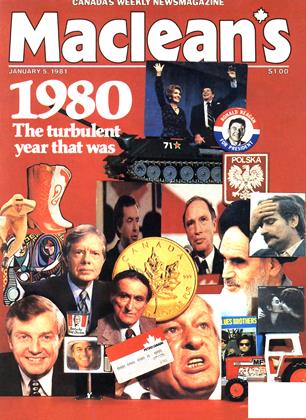