Throughout her two years as Canada’s high commissioner in London, Jean Casselman Wadds has engaged members of the British establishment in an elegant round of dinner parties—featuring claret and the Canadian constitution. The most important of all her connections was a solid relationship with Prime Minister Margaret Thatcher. Accordingly, when word began to leak out that the Liberal government planned to replace Wadds, who was appointed in the closing months of Joe Clark’s mini-reign, the concern in official Ottawa was that Thatcher might conclude that her friend Wadds was getting an unfair rap.

In a sense, she is. When the next phase of the constitutional process is decided in London, Wadds will be replaced by Don Jamieson, 60, former minister of external affairs and a dean of Newfoundland Liberals. Wadds will be offered another post, possibly Portugal, but some associates think she may return home to Ontario where her father, Earl Rowe, once ruled as a leader of the Conservative party and was later lieutenant-governor.

The move shows clearly that performance is not the sole criterion of the Liberal party. Although Wadds is a for-

mer Tory MP—she joined Dalton Camp in his campaign to dump John Diefenbaker from the party leadership—she got top marks for lobbying on behalf of Pierre Trudeau’s package. Says one senior constitutional bureaucrat: “She’s been very gracious, very astute politically and a very loyal servant of the government of Canada.”

For long-serving Don Jamieson, the London appointment was an eternity in the arranging. He retired from active politics last fall, having left the federal scene to wage a losing provincial campaign against Newfoundland Premier Brian Peckford. Then he was touted to succeed Peter Towe as Canadian ambassador in Washington. But Jamieson’s self-professed “love affair” with Americans made him suspect to nation-

alists at External. Besides, Trudeau’s powerful cabinet secretary, Michael Pitfield, had promised Washington to Allan Gotlieb, the external affairs department’s chief mandarin and Trudeau’s personal representative during last summer’s economic summit. Trudeau announced Gotlieb’s appointment last week. Had the constitutional question not dragged on, he planned to announce Jamieson’s nomination at the same time. Among the leading contenders for Gotlieb’s old post as undersecretary are Pitfield himself and Gotlieb’s deputy, De Montigny Marchand.

Gotlieb, a bookish technocrat, takes over at a time of acute tension between Ottawa and Washington. He recently advocated a revival of the so-called Third Option, a policy that continentalists denounced as an attempt to build new links with other countries at the expense of relations with the United States. Once on scene in Washington, however, Gotlieb is expected to conduct himself in the quiet, grey tradition of his predecessors.

Wadds pursued her job in London in the same mould and, like Towe in Washington, was aloof from inquiring reporters. Only once, in a remarkable leak of confidential documents last February, did Canadians get a glimpse of her hardball on the constitutional courts. In one memo Wadds worried that her tele-

phone was tapped by people who wanted inside dope on Canadian strategy. When British Tory Jonathan Aitkin, a Trudeau critic, planned a visit to Canada, another Wadds memo admonished: “We shall need a snow job on him.” For Wadds, the leaked memos proved a major embarrassment. As for the latest accounts about her own future, an aide would say only that he knows nothing about the rumor. In fact, Wadds knows that her gig is over, essentially because she was born a Tory—and Grits play for keeps. 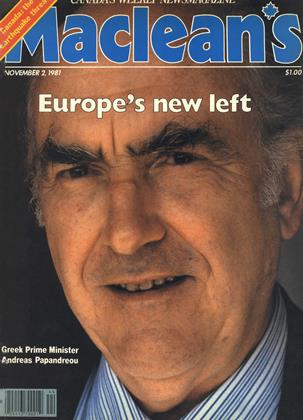