Patrick Watson has never liked big parties but he has always been up for an event. In New York, the two converged last month as Studio 54 met Roman renaissance in the marbled beaux arts interior of the New York Public Library. Among the 1,200 guests who spun through the bronze revolving doors—to be greeted by jump-suited harlequins and serenaded by woodwind quintets and a 24-piece orchestra—was singer Tony Bennett, New York Mayor Ed Koch and actress Jane Alexander. Watson was not only there, with the Order of Canada pin in the left lapel of his tuxedo, with Canadian actress Kate Nelligan on one arm and Canadian filmmaker Teri McLuhan on the other, in his perplexingly understated way he was somehow at the centre of it.

The occasion of the party was to publicly launch CBS Cable, a $10-million arts and cultural programming network aimed at three million U.S. subscribers who reel at the philistinism of commerical TV. Watson is the host of the network, which is the latest feather in his already well-plumed cap. For the past 10 weeks he has been working 12 to 15 hour days screening programs, interviewing guests, writing scripts and generally lending what The New York Times has called: “the suave demeanor and articulate style that is reminiscent of the comforting presence of Alistair Cooke.”

Later that evening at a private dinner

party Watson finally met William S. Paley, chairman of CBS and still, after more than half a century as the father of modern broadcasting, one of the most powerful men in the United States. There, the 80-year-old Paley beamed approval of Watson and the fledgling network. Eyes squinting from his florid face, Paley rubbed his fingers together as though pinching salt and proclaimed,

This was high praise coming from television’s high priest, but nothing that Watson had not heard before. His entire career, whether in broadcasting, writing or film-making, has unerringly had “the feel,” otherwise known as the Watson touch. To roll Watson’s professional credits is to make men twice his age wish they had done half as much. In 1964 Watson imbedded his fingertips in the Canadian psyche with This Hour Has Seven Days—the Sunday night public affairs show that resounded throughout the establishment first thing Monday morning. When the program was killed amid much controversy two years later, and doors started closing at the CBC, Watson merely turned his polyhedral mind to other ventures. “I was looked upon as a troublemaker,” says Watson over lunch in New York for which he has changed his formal tux for the more familiar turtleneck and blue jean jacket. “Partly, it was a selfchosen exile from the CBC,but it was also true they wouldn’t hire me. I was broke after having done some spectacular TV.” Watson, who has never allowed himself to languish long—“the last time I was bored was as a kid sick in bed and I didn’t have enough to read”—was soon off again. He became the first North American to film in China, a documentary called The Seven Hundred Million. He directed Jacques Cousteau and created CITY-TV’S Titans and the CBC’S Witness to Yesterday, expanding the theatrical potential of the medium by inter-

viewing such bygone greats as Napoleon, Confucius and Adolf Hitler. There was also his documentary on Albert Speer and a series on aviation, Flight: A Passionate Affair. For two years in the early ’70s, he was host and producer of The 51st State, a combative public affairs show for PBS in New York. The list lengthens with the dynasty of programs he either wrote or hosted from Ottawa, including Quarterly Report and The Watson Report. This month, he begins a series of overseas news documentaries for the CBC’s upcoming current affairs program, The Journal. This is not to

mention the six books he has written. Nor does it touch on his personal achievements: father of three, an accomplished pilot, cook and pianist, having taught himself to play at the age of 45. “Watson is like Galileo,” says Dan Turner, an Ottawa TV host who once worked for Watson on The Watson Report. “He not only thinks he can do everything, he does it.”

As a child, however, Watson was more Houdini than Galileo, earning his first theatrical stripes as amateur magician at neighborhood parties in Toronto. Early on he showed a penchant

for getting a hand in every aspect of production. Watson not only performed, he also invented his own tricks. At Oakwood Collegiate, he acted in amateur productions and at 13, he got the part of Jake in the radio series The Kootenay Kid. He earned $5 a week but his entry into the world of sound effects, timing cues and theatrical illusion was worth more in the long run. Perhaps the only serious detour Watson took from his duly appointed path in broadcasting was into the world of academia. While working on a PhD in education and linguistics from the University of Michigan, Watson at one point thought he might like to become a university professor. Why? His answer reveals part of what has kept his life as busy as a Brueghel painting: “I wanted to be one of those people who were admired.”

If it was simply admiration that has stoked the fires of Watson’s ambition, then he could retire right now at the age of 51 and live off the interest of all he has received. He could go back to his log house retreat in Beckwith Township outside Ottawa and pick mushrooms or practise a Bach fugue that has struck his fancy. Or he could nestle into his house near Georgian Bay, where he plans to plant daffodils in the few free days between his stint at CBS and flying off to Zimbabwe, which is likely to be his first assignment with The Journal. Watson says that he has, in fact, “slowed down” from the furious pace he set himself in the ’60s. To be sure, his interest in politics has somewhat abated. He now yearns for more time for reflecting at the typewriter or just relaxing at the piano. He admits, only slightly ironically, that he no longer wants to be president of the CBC. “It’s a lucky thing I didn’t get it,” he says. “In the middle ’70s I decided I was through with media politics. It’s exhausting and its rewards are now mysterious. An art-

ist can see the effect of his invention and that is power enough for me.” Friends of Watson, however, say that he is still “searching”—perhaps to recreate the excitement of This Hour Has Seven Days. “He is like a sailor always looking for the perfect wind,” says Laurier LaPierre, his close friend and cohost of This Hour. Adds Gordon Cullingham, who has known Watson since the ’50s, now the area supervisor of public affairs for the CBC in Ottawa: “Patrick is still trying to find out where you win next after having won it all.”

If it is true that Watson has won it all, he has also had his share of losses. In 1949, his older brother Cliff, who survived as a fighter pilot in the Second World War—having paid his own way over to Britain to enlist in the Royal Navy—died in a freak accident while rehearsing in a Seafire for the CNE airshow. “My brother was a role model for me,” says Watson. “He was a wonderful storyteller, which is just about the best thing I can say about anyone.” Watson’s second great loss happened in 1960, when he fell while building a geodesic dome, an attempt to put into practice the mathematical principles of his intellectual hero, Buckminster Fuller. His leg was crushed in the fall, he contracted gas gangrene and his family was told he probably wouldn’t live. Watson survived, but his leg was amputated above the knee. Friends say it was a bitter blow and possibly one of the things that has driven him to succeed. LaPierre says Watson “strove a little harder” after the accident. “It was not an obsession so much as an attempt to regain the harmony, the balance in his life. I have seen him in great anxiety about how he looked and felt, particularly with women. I have seen him in great pain. But somehow he has always managed to come out of it in great transports of joy.” Watson himself says the experience “made me lose my fear of dying and helped me accept the subsequent deaths of people around me. It didn’t make my brother’s death any easier to live with. I still have nightmares about that.”

Be it from friends and colleagues who have known him much of his professional life or from the grizzled stagehands at CBS studios in New York, the needle of their emotional commitment to Watson skips between two poles: reverence and adoration. “It won’t be the beautiful interviews I will remember Patrick for,” says LaPierre. “But that he has saved my life. Last fall when I was very suicidal, Patrick was on the phone to me every hour. His calm and resourcefulness pulled me through. What I will remember is walking in the fields and being close to him.”

In the CBS studios, a woman from wardrobe is brushing the lint from

Watson’s tuxedo. Dressing up was Watson’s idea, his instinct being that the formality gives each show the feeling of “an event.” Besides, he adds, a smile breaking from under the grey clouds of his hair, “the tuxedo makes me look thin.” Again, the Order of Canada pin is prominent in his left lapel even though it is a full nine days before he will travel to Ottawa to be invested. “I got it before I came down here and couldn’t wait to wear it. I try to get as much Canadian content in these programs as I can.” In a chair to Watson’s left, waiting to be interviewed, is popular representational artist Alex Katz, whose recent works are wide-eyed, brassy-colored paintings of his wife. The extent of Watson’s familiarity with Katz had come 15 minutes earlier when Watson nipped into his dressing room to peruse a book of his art. “That’s one of the things about Watson,” says Turner,

who regularly briefed Watson on The Watson Report. “You give him research the day of the show and his mind absorbs it like blotting paper.”

But that is only one facet of the interview style that has set standards in Canadian journalism. “What makes Patrick the best interviewer I have ever seen,” says Cullingham, “is his complete mastery of material, his first-rate mind, his intelligent sensitivity and his ability to control the mood and pacing of an interview. There are never any loose ends.”

The artistry is apparent as Watson, whose face runs from impish to monkish depending on the slant of his smile, the tilt of his head, quizzes Katz with the certainty of a man intellectually kneading dough. No less evident is the pleasure he takes in his own skill. As he puts it: “I just like to be able to dance for the cameras.” 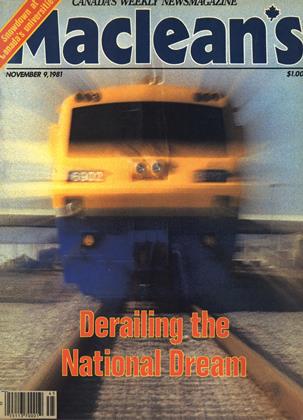