A storm over claims for refuge Val Ross December 14 1981

Replete with weighty furniture, flourishing plants, two dogs and a cat snoozing immovably on the sofa, the suburban Toronto living room reveals a determination to put down roots. The apartment is home to Ricardo Galleguillos, 25, and his pregnant Québécoise wife, Patricia—but not for long. After rejection by the Refugee Status Advisory Committee (RSAC)—the

board of anonymous bureaucrats and appointed laymen that determines which refugees get sanctuary in Canada—Galleguillos has been given 60 days to leave the country.

His last chance is a plea to Employment and Immigration Minister Lloyd Axworthy to be allowed to stay on humanitarian grounds. He and his wife will stay together whatever happens, states Galleguillos, gazing at Patricia.“But how can I take her back to a country like Chile? I used to be a student activist there, so I will be blacklisted from good jobs. My mother says that the secret police looked everywhere for me after I left.” Recalling his past three stretches in Chilean jails for political activity and the disappearance of his closest friends, Galleguillos sighs, “I just don’t understand Canadian immigration law.”

Such frustration and confusion abound as 2,500 other cases await assessment by a beleaguered RSAC and its tortuous process of hearings, judgments and appeals that can take up to two years to complete. Meanwhile, the flow of exiles from Poland continues unabated, and daily new groups—Armenians, Syrian Christians, Guyanese, Hondurans—flee their homes for their lives. The Immigration Act states that refugee status can be granted to any member of a “displaced or persecuted” group. But church, civil libertarian and ethnic community leaders charge that the definition is applied unfairly, ignoring the most viciously persecuted groups in favor of those with stronger lobbies in Canada.

As some press the case for compassion, others urge greater pragmatism. Maintains Peter Doyle, the Canadian Manufacturers’ Association’s director of industrial relations: “Domestic productivity is suffering because we’re not getting the [skilled] people we need from abroad.” To further complicate matters, public patience with the refugee question is running short. Since summer, the already overburdened system has been further encumbered by 1,750 new refugee status claims by Sikhs, publicly described by Immigration Minister Axworthy as “exploiters”

of an application procedure that allows them to work in Canada until their appeals are heard. Last month, Axworthy took a stand on reforming Canada’s refugee policy, finally releasing a task force report that since June has inspired heated debate within the ministry. Some of its recommendations, Axworthy promises, will be implemented immediately, for the goal is “to reflect Canadian standards of fairness.” The other suggestions have been tabled until early 1982—when they are certain to spark more argument.

That action is needed there’s little doubt—inefficiency hampers the entire process. Most claims are made in Canada at an oral hearing, often through translators that Immigration admits are fallible. Seldom do claimants understand their rights. In Ottawa, the transcripts are assessed by people who have never clapped eyes on the claimants nor, in all likelihood, the conditions from which they are fleeing. Pressed for time, RSAC reads only about half the transcripts—the rest are evaluated in précis. Worse still, the RSAC has no guidelines for assessing a claimant’s credibility. Small wonder the task force report warns of “the danger of falling ç into crystallized patterns of 5 skepticism.”

Church groups perceive other « problems. They insist that CanI ada’s record in accepting refugees z has fallen short of the mark since ithe welcoming of the Boat People sealed this country’s reputation as first in the world for offering sanctuary to the oppressed. In 1980, the year of the great influx, the gates opened to 40,000 refugees—25 per cent of total immigration. In 1982, however, Canada will accept 14,000—10 per cent of the total. Fifty thousand, says the Toronto-based Interchurch Committee on Refugees, is a reasonable goal. But do 50,000 want to come to Canada, asks Raphael Girard, director of refugee affairs for the department of immigration. “There aren’t large numbers of Indo-Chinese seeking resettlement,” he responds. As for

Latin Americans, “the vast majority are campesinos who want to stay on the land.” Kathleen Ptolemy, co-ordinator of the Interchurch group, rejects that claim and worries that the criteria for selecting refugees are, in practice, drawing perilously close to those that govern the selection of ordinary immigrants: an urban background, a good education and marketable skills.

If urgency alone should dictate Canada’s response to the global refugee problem, officials could be gazing at the potential claimants through the wrong end of the telescope. Of the almost five million people subsisting in refugee camps in Sub-Saharan Africa, Canada plans to take in 500. By contrast, 6,000 places will be found for East Bloc refugees, 20,000-strong, confined in camps in Austria. From the Middle East’s teeming 1.9-million-member refugee camps, 400 will be accepted. There is room for only 1,000 from all of Latin America and the Caribbean—yet 100,000 are seeking refuge from violence in tiny El Salvador alone. To weigh one person’s trials against those of another will always be a delicate task fraught with pitfalls, but many contend that the Eastern European exiles are compara-

tively well off. Said Polish refugee Andrzej Rudinski as he stepped off the Stefan Batory in Montreal last month: “I had two cars in Poland and no gas. All my money couldn’t buy what we needed.” Says Toronto immigration lawyer Jeffry House: “The quotas bear no relation to who is most persecuted or who is in greatest need.”

nists—so they are less desirable immigrants.” Support for that charge can be found in the Immigration Act itself. Indo-Chinese who qualify for entry must have left their country “subsequent to April 30, 1975”—prior to that date, they would have been escaping the U.S.-supported Saigon government. Those leaving countries such as Czechoslovakia or the U.S.S.R. qualify for entry into Canada under the heading “self-exiled persons”—they have only to be “unwilling or unable to return.” But members of the “Latin American designated class” must prove themselves unable to return “by reason of a well-founded fear of persecution.” Ricardo Galleguillos, for example, failed to convince the RSAC that his three prison terms for political activity constituted “persecution.” The committee’s letter of refusal pointed out, “Your detentions did not involve torture or serious mistreatment.” Yet Cubans, who account for the majority of this year’s record number of defections at Gander airport in Newfoundland, need never prove imprisonment or physical abuse, allows Jarrett Letto, of the Gander Immigration Centre. “To my knowledge, all they have to do is say they’re afraid.”

Charges of political bias continue to resound, despite the task force report’s assurances of change. Just how much change remains to be seen. Axworthy has already targeted three areas for prompt action. The government-published booklet explaining refugee claimants’ rights—which has long been denied to refugees—will now be distributed widely at immigration offices and ports of entry. To shoulder the burgeoning work load, the RSAC has just been expanded to 11 members. And to ward off arbitrary decisions, Axworthy will provide guidelines determining precisely who qualifies as a refugee. Less immediate reforms are also promised; and when these become reality the RSAC must begin evaluating the full transcripts of all claimants from countries known to have refugee problems. The minister has also ordered a reassessment of the nationalities qualifying for the contentious “self-exiled class.”Says he: “We should be looking not at whether people come from a communist country or one with a right-wing authoritarian regime, but simply whether they’re escaping persecution.”

The fate of other reforms suggested by the task force remains an open question. Among them, for example, is the suggestion—likely controversial—that the government join forces with private sponsorship groups and the provinces to ease the admission of handicapped and unskilled refugees to Canada. But whatever the outcome, the reforms will not affect the quotas. Nor will they neces-

sarily address an obstacle that confounds immigration lawyers. “Canada still has a refugee policy that doesn’t allow potential claimants to get here,” observes Michael Schelew, Amnesty International’s refugee co-ordinator in Canada. Since 1977, Canada has slapped visa requirements on 12 countries, ostensibly to curb the flow of phoney claimants. But among this group are countries—South Africa, El Salvador, Uganda, Chile and Haiti—with fearsome reputations for domestic repression. Last year, an Ottawa official admitted to Schelew that Salvadorans applying from Guatemala for visitors’ visas were being asked to notarize statements swearing that they were not victims of persecution and would not file for refugee status in Canada.

Whatever Immigration’s good intentions, a gulf separates those who make the policies from those who act upon them. And a visit with hard-working middle-level immigration officials quickly shows their grounds for weariness with the refugee problem. On a typical Monday in a downtown Toronto hotel - turned - immigration - detention -centre, refugee claimants watch color TV, sleep in a $35-a-night hotel room and choose the menus for their three meals. They include a right-wing paramilitary Turk; a musician from New York, wearing dreadlocks and a studded T-shirt, who says he is fleeing persecu-

tion by the Scientologists; and a sadeyed Sikh, who skipped his last hearing and then perjured himself before officials. Here all three will stay on the public purse until their appeals are assessed. For the Sikhs in particular, bureaucratic sympathy wears ever thinner. So far the RSAC has found that despite their accounts of oppression in their native India, precisely none of them meet Canadian criteria for refugee status. But, cautions Charam Gill, president of the B.C. Organization to Fight Racism, it’s dangerous to let nuisance cases blunt the edge of justice. “Some of those cases are genuine; India is known to imprison Sikh separatists.”

For immigration, of course, the goal is far more complex than just the exercise of compassion. The department must also consider the reunification of families and the expansion of a dwindling pool of skilled labor. Its mandate is to make choices that shape the emerging character of this country.

Yet though hard choices loom ahead, they cannot be decided more erratically than they have been in the past. Eliana Leal, 24, had been tortured by the Chilean secret police and her father beaten and imprisoned; all the same she despaired of winning succor from the RSAC and attempted suicide. Only after Toronto newspaper columnist Michele Landsberg wrote about her case a year ago did Immigration finally relent. Concludes Amnesty’s Schelew: “Immigration will always make humanitarian exceptions on specific cases—if someone presses hard enough. But refugees don’t need exceptions. They need a new, clearer policy.” 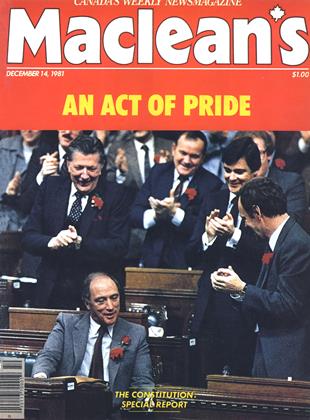