Amere 110 metres separated the two soldiers as they eyeballed each other suspiciously from their small white guard houses. The silence of their vigil was not unusual—for seven years no words have been exchanged across the narrow strip of land on the Golan Heights that separates Israeli and Syrian troops. Sentries apart, there was little sign that the opposing armies were on full alert last week in the wake of Israel’s lightning annexation of the Golan.

But if an eerie sense of calm prevailed in the region, the same could not be said for the reaction in the rest of the world. The Israeli act provoked an immediate

international furore. And diplomatic observers were clearly wary. The two sides’ forces were evenly matched in the Golan, the diplomats pointed out. Now, a more likely flash point for the growing hostility was southern Lebanon, where relations between Syrianbacked Palestinians and the Israelis are steadily deteriorating.

The rumors of war, wherever it might break out, came as no surprise. The Israeli decision to place the Golan under civilian rule was regarded by Syrian President Hafez Assad as a naked affront to his plans for the eventual recovery of the territory that his country lost in the 1967 war. But if the move was provocative, it was also carried out with remarkable swiftness. Apparently calculating that the world’s eyes were on

Poland, Israeli Prime Minister Menachem Begin pushed the necessary legislation through the Knesset in one day.

Introducing the new law from a wheelchair—he had just been released from hospital after being treated for a broken leg—Begin claimed the annexation was an act of self-defence. Quoting a recent declaration by Assad that Syria would never recognize Israel “even if the Palestinians deign to do so,” he spoke passionately of the men, women and children killed by Syrian shelling from the Golan Heights before 1967.

But other calculations came into play besides the alleged need for self-defence. As Israeli observers pointed out, the timing of the legislation caught the opposition Labor Party in disarray. For one thing, the party was deeply divided over the future of the Golan. For another, Labor leader Shimon Peres had gone abroad four days earlier—after re-

ceiving assurances from Begin that no such action would be taken.

An even more important factor, according to a senior official in Begin’s office, was the prime minister’s determination to act before April, when Israel is due to complete its withdrawal from the Sinai. Begin was gambling that Egypt would do nothing to jeopardize the withdrawal and that by spring the Golan would be a dead issue.

At week’s end, at least, the first part of that assessment appeared to have been borne out. Egyptian President Hosni Mubarak responded with a declaration that the annexation in no way upset the Camp David peace process. And Cairo was not the only place where Begin’s gamble was paying off. In Washington, there was some bitterness that Israel had acted without consultation. But the official response was mainly verbal and held little prospect of punishing Israel. Upcoming discussions to implement the strategic co-operating agreement with Israel were indefinitely suspended. But that move was merely reminiscent of the short-lived suspension of F-16 fighter deliveries in the wake of the Israeli raid on the Iraqi reactor last June. The United States did support a United Nations Security Council resolution declaring the annexation null and void and demanding that Israel rescind its legislation within two weeks.

But few expected that when the deadline passes—the Israelis immediately rejected the resolution—the Americans would support trade or political sanctions.

The absence of a clear lead from Washington left the UN powerless to defuse the crisis. And that, in turn, made the situation in Lebanon more worrisome. Syrian-Israeli tension has been high since last April, when the shooting down of two Syrian helicopters was followed by Syrian deployment of Sovietmade SAM-6 missiles in the Bekaa Valley. The fear is that Syria may respond to the annexation by deploying additional missiles, thus giving the Israelis an excuse for a counter-strike.

Even more dangerous is the situation in southern Lebanon. There, tension already threatens to break the fragile ceasefire that ended the Israeli-Palestinian fighting last July. Begin and Yasser Arafat, leader of the Palestinian Liberation Organization (PLO), have accused each other of building up troops and equipment in preparation for an assault. UN troops stationed in the area confirm that both sides are doing just that.

As one Western diplomat pointed out, “A nudge and a wink from the Syrians is all it would take to prompt pro-Damascus elements in the PLO to have a go.” If so, the challenge may be willingly accepted. As a well-informed military analyst in Damascus explained, “The Israelis are looking for an excuse to secure an even bigger chunk of Lebanon as a buffer zone.” In that event the sentries on the Golan Heights may find themselves exchanging more than just angry glares. 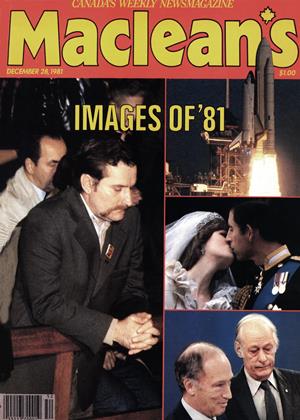