Alexander Cameron Ross is a man who has always been slightly ahead of his time. At university, some time before the folk-singer rage swept the campuses, he was a fixture at parties with his banjo and a satirist’s gift for songs that punctured politicians and turned sorority sisters faint. Ten years ago, he was the chief writer on the Davey Senate committee on the mass media that warned precisely of the events that the Kent Royal Commission on concentration of newspaper ownership is now investigating. Most newsrooms, wrote Sandy Ross, are “boneyards of broken dreams.” He has been managing editor of this here magazine, he wrote a daily column for the country’s biggest paper, the Toronto Star, he has written a book on entrepreneurs (the people he admires most of all) and he was the one who originated the term “corporate welfare bum” that David Lewis based a whole election campaign on. He has been the editor for several years now of Canadian Business, a highly successful magazine published, as is practically everything else, in Toronto.

What is interesting is that Sandy Ross, the chap always slightly ahead of the trends, last week moved to Calgary. The day after he hit town, he put a down payment on a $150,000 townhouse. The builder says the day it is finished, later this spring, it will be worth $162,000. In his first 72 hours in town, Sandy Ross made a $12,000 capital gain. The reason he has made the switch to Calgary is to start a new magazine called Energy. It will be the first national magazine published in Alberta. The province already possesses the only provincial weekly newsmagazine in Canada, Alberta Report. (Any easterners reading it would conclude they had better stock up on muskets and tinned milk.)

What is so apparent about Calgary these days (it will be a great city once Allan Fotheringham is a columnist for Southam News.

they get it uncrated) is the energy. One feels in a time warp on arriving either from the smug satisfaction of Ottawa or the mellow oblivion of Vancouver. Lights snap on in the downtown towers shortly after 7 a.m. The roar of rushhour traffic wakes hotel guests well before that. At the University of Alberta Faculty of Management’s Business Day—at which graduating students meet with businessmen who will hire them—there is so much well-fed exuberance that a visitor feels like an emis-

sary from a foreign, less-affluent land. The boys are in new-wealth three-piece finery in the light colors of the country of the big sky; the clear-eyed girls confidently running things as they expect to do in the business world. Not a Dolly Parton in a carload. Seventy-five per cent of this business class will stay in Alberta.

Air Canada’s seat sale to San Francisco and Los Angeles is fully booked to Feb. 28. CP Air now runs four charter flights a week to Palm Springs. If you want to gamble, you can fly free from Edmonton to Las Vegas—the casinos will pay the air fare of Albertans with so much money they want to lose it. Peter Pocklington, the millionaire who owns the National Hockey League Edmonton Oilers (including The Great Gretzky) and the Edmonton Drillers professional soccer club, has a surprisingly sensitive face beneath his blonde beard. He’s worried about the blindness of Ontario in the energy dispute and says, yes, if the pressures build up badly

enough, he may have to enter politics. “Alberta tends to create wealth,” says newly minted Calgarian Sandy Ross. “Toronto tends to reshuffle it.”

Into all this comes Marc Lalonde, the designated hit man from Ottawa, who has been delegated to confront Alberta even though his leader declines to travel to the West to display the clout of his office. Marc Lalonde, brisk, confident— “a snake in the lions’ den” is the Calgary Sun headline—comes to Cold Lake, a town in the heavy-oil district where the expected boom has gone fiat in the wake of the Ottawa-Alberta showdown. It is the fault of Peter Lougheed, Lalonde announces. It is Edmonton that is dragging its provincial feet, not conciliatory, reasonable Ottawa.

A suggestion might be made. The impasse is turning the alienation of Alberta into hate. The depth of anti-Ottawa feeling is hard to describe. It is supposed to be the job of political z leaders to lead, which Smeans being creative. A ^creative thing for Mr. gTrudeau would be for “him to put his mind to things domestic for a spell and have a slight shuffle of his cabinet which, God in Her wisdom knows, could badly use it. It should not be entirely impossible to create some diversionary mumbo jumbo that would give Marc Lalonde a “promotion.” Some convenient way could be found of removing him from the energy portfolio without it appearing to be a demotion. Pride, in politics, is all.

The removal of his prickly presence from the vital portfolio would be a federal signal to Alberta and the West. Ottawa would be signifying that it was making the first move in loosening the logjam. Fortress Alberta could hardly do less than to reciprocate with some softening of its uncompromising stand on energy and its threatened cutbacks in production. One olive branch deserves another. Marc Lalonde can serve the Liberal government in other ways. The best way he could serve this one is to swallow his pride and move elsewhere. 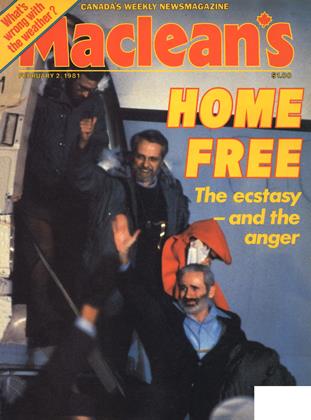