The head of mission gathered up his diplomatic passport and slipped quietly out of Ottawa last week, summoned home on short notice for “consultations.” Only by sheer chance, went the official line, was he leaving while External Affairs Minister Mark MacGuigan was investigating allegations of what he called “completely unacceptable” conduct by the diplomat. Equally coincidental was the announcement by the diplomat’s own foreign office that he would retire early and be replaced this summer. It might all have been just another spat between the Canadian government and some Eastern bloc embassy. But the man in the diplomatic storm was British High Commissioner Sir John Ford, a career foreign office professional of apparently unsoiled record representing a country that still stands as one of Canada’s best friends abroad. The constitutional debate which has wracked Canada for months had for just as long engendered worried murmurs in the encrypted diplomatic messages between London and Ottawa. Suddenly, though, the domestic dispute deteriorated into a most extraordinary international incident.

Democrat MPs at Governor-General Ed Schreyer’s yearly skating party last month. By all accounts he asked them about aspects of the constitutional debate in Parliament and warned them of opposition in the British Parliament, which must ultimately vote on Prime Minister Pierre Trudeau’s package. Asked in the Commons about this “attempt to influence” MPs, MacGuigan startled his own officials by terming the alleged behavior unacceptable, if fact, and promising to investigate. Reaction among officers in both Canadian and British foreign services ranged from astonishment to squeamish shudders at

MacGuigan’s terminology—usually reserved in protocol jargon for the most offensive breaches of ambassadorial practice. Most mysterious to many observers was Sir John’s supposed transgression; lobbying is partly what diplomats are paid to do—in the discreetest possible way, of course. As Sir John himself noted, Canada’s man in Washington, Peter Towe, is under open instruction from Ottawa to lobby American senators into ratifying a fishing treaty with Canada. Conjecture also

NOW MRS. THATCHER REPEAT AFTER ME:

CONTRADICTIONS ON THE CONSTITUTION COME MAINLY FROM CANADA.

COMMENTS ON THE CONSTITUTION COME MAINLY IN THE COMMONS.

CLOSE ENOUGH/ I THINK SHE'S GOT IT/

surrounds MacGuigan’s so-called investigation; oddly, it has not included an interview with Sir John or any other British diplomat for their side of the story. There is, no doubt, a line between lobbying for one’s country’s interests and meddling in a foreign country’s affairs. Sir John’s predicament simply proves that, in the case of the constitution, the line is now indiscernible.

What is being called in British circles “the Ford factor” has had a distinct but perhaps short-lived impact on CanadaU.K. relations. Said one Canadian last week: “It has created a cloud.” But officials on both sides have struggled to repair any damage. “We still have extremely good relations,” said another Canadian diplomat. “We’re co-operating closely on the Western summit, for example. It’s amazing, actually, how we’re getting along. I think we’ll come out of this okay.” In the British High Commission there is agreement that no lasting damage has occurred—yet. “But that time may come at a later stage if things go badly wrong.” One scenario dreaded by both sides has Britain’s Prime Minister Margaret Thatcher angry over the problems imposed by Trudeau just as she arrives here next July for the seven-nation Western summit, at which Trudeau will be the host anxious for success. Another has a beleaguered Trudeau rolling out a British scapegoat to unify Canadians around his controversial constitution. One diplomat thinks MacGuigan has already “indulged in a bit of Brit-bashing.” One cause for hope, though, was the timing

of the British announcement that Sir John will retire (at 59), to be succeeded by longtime diplomat Lord Moran, now posted in Lisbon (see box). The early retirement—earned because service years ago in Bahrain won extra seniority credits—had been carefully bruited about Ottawa by the British last fall, just so it would not be taken amiss amid the constitution dispute. Public confirmation last week was taken by some Canadian officials as a signal Whitehall wanted to lower the temperature. Sir John’s quick trip to London was also explained away: closed-door study by the parliamentary committee in Ottawa offered just the interlude for Sir John to brief London on the latest amendments.

If he leaves under a cloud, what disturbs some diplomats more is the eruption of leaked cables from his Canadian counterpart in London, Jean Wadds. Leaks, like earthquakes, tell of buried tensions—the partings and grindings of factions and affections deep in the bu-

reaucracy. Canadian officials were sure the leaks from their own ranks were meant to embarrass Ottawa and Wadds, and said they had been winnowed so as not to show that British authorities actually agree with Trudeau on how to handle the constitution. In fact, the content of the leaked cables only reveals the obvious: that Wadds is working at least as hard at lobbying politicians as Sir John ever did. The provocative reference to possible phone taps “by suitably equipped countries, including certainly Britain, France, the U.S.A. and the Soviet Union,” was not

so much offensive as needless. External’s staffers hardly have to remind each other to mind their mouths; a notice on every departmental phone book warns that “classified information shall not be discussed on the telephone.”

In Parliament, meanwhile, the constitution committee thrashed out its final report behind closed doors and submitted the resolution with government-approved amendments for final debates in the Commons and Senate. Outnumbered by Liberals, the opposition could do no more than harry the Grits on side issues—killing a Liberal ploy to list every group that testified in favor of a charter of rights, for instance. With the NDP supporting the government (see page 24), the Tories were left to draft a dissenting report for release this week. Declare the Conservatives: “The proposed resolution is politically and perhaps legally illegitimate because it ignores Canada’s federal nature.” The Tories look likely to try to exhaust the government into invoking closure—bringing public disfavor upon the Liberals that would reflect well on Joe Clark at the very moment he faces a leadership test at his party convention at the end of the month. Committee co-chairman Senator Harry Hays predicts quick action in the Liberal-dominated upper chamber. “We’re a long way from the bathroom facilities and, looking at the age of some of the members in the opposition benches, I’d say we’ll whip ’em through pretty fast.”

Quarrels over content aside, the central issue in the resumed parliamentary debates will again be the propriety and legality of Trudeau’s constitutional operation—what former Conservative leader Robert Stanfield and others have called a nonviolent coup d’etat. Exposed to the wheezing and snorting of editorial writers lately, a vexed public might well ask why the British should be slung into

this fight and whether the feds are trying to achieve in London what they could not by meeting the provinces. Framed in legal language, these questions were raised by robed barristers in the Newfoundland Court of Appeal last week in the second of three cases brought by six provinces against the Ottawa initiative. Already unsuccessful in Manitoba, the provinces asked the Newfoundland judges to find that there is a binding convention requiring Ottawa to win provincial consent for any constitutional change affecting provincial powers. Arguing that there is no such convention, Ottawa’s lawyers contend that the British North America Act can be amended by Westminster simply by sending a joint resolution from the Canadian Parliament—exactly what is under debate in Ottawa. The dispute will be replayed in the Quebec court next month and will eventually reach the Supreme Court of Canada. The Newfoundlanders appended a question of their own this time: could their 1949 terms of union with Canada be altered by future amendments to the Trudeau constitution? Premier Brian Peckford says his Labrador border with Quebec and the province’s denominational school system could be changed without Newfoundland’s assent; though theoretically possible with support from six provinces and Parliament, Ottawa calls that most unlikely.

Another question, more political than legal, is whether the proposed charter of rights might better be added to the constitution after its patriation from Britain—saving the British government and Parliament the embarrassment of this controversy. It’s a proposal repeatedly made by Clark, and it appeals to the sentiment that a grownup country should wash its own dirty linen, not send it home to Mum. As a solution, however, it is flawed: the provinces have never agreed to simple patriation (complete with a formula for arranging future changes) without various riders of their own; Peckford made it clear last fall that he would oppose patriation unless Ottawa first concedes offshore mineral rights to coastal provinces. Since federal-provincial agreement had proved for years to be impossible, the Trudeau cabinet chose to patriate and entrench the charter in one move—it being as well, perhaps, to be hanged for a sheep as a goat.

What the British must themselves ultimately decide is whether Westminster, like Customs men, should examine the contents of the Trudeau package or pass it without a peek. Thatcher herself is on the record as seeing eye to eye with Trudeau that the Canadian resolution should be presented automatically to the British Parliament. But reports published in London last week—clearly based on top-level briefings—indicate she may have lost hope of getting the package through Westminster until it enjoys more support in Canada. If it is humiliating for Canadians to go beholden to London for their own constitution, it is galling to the British Parliament to be ordered to accede without question. For both countries it is, at best, a last, nasty price to be paid for

having and losing an empire._

With files from Patrick Keatley in London. 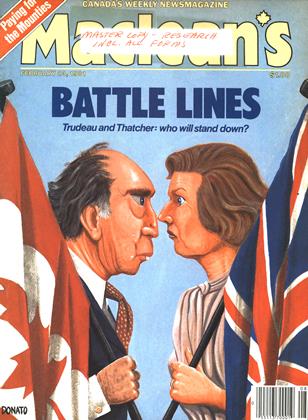