Thirty years ago Celia Franca brought classical ballet to Canada and now she’s helping the Chinese catch on too. The founder of the National Ballet has been off in Peking and Shanghai teaching, directing and trying to put their ballet scene en pointe. “It’s a postrevolution recovery for them,” says the indefatigable Franca. “They are getting away from those propaganda ballets and want the classics again.” Encouraged by the Chinese dancers’ great athleticism and enthusiasm, Franca staged Coppêlia. As the spiritual force behind Theatre Ballet of Canada, the latest major dance company to be formed in Canada, Franca has now arranged a cultural exchange with China. Two Chinese dancers, Guo Peihui and Wang Jiahong, have joined the company, and Franca, 59, admits they will have to make some adjustments. “It’s bizarre,” she says, “but in China young men and women never touch—that doesn’t work in ballet.” Guo and Wang are now on touching terms, but Guo had yet

another adjustment to make. It seems she hadn’t spoken with a boy for six years. “They are very sensible people,” adds Franca.

Justice Minister Jean Chrétien’s press secretary, Andre Desmarais, may be in charge of information flow but he couldn’t stop word of his secret engagement to the boss’s daughter from leaking out. Desmarais, 24, the younger son of Power Corp. magnate Paul Desmarais, and Chrétien’s only daughter, France, a 22-year-old law student at the University of Ottawa, will wed May 23.

Although the Chrétien and Desmarais families have been friends for more than a decade, the union may be particularly serendipitous for the minister, since the Power conglomerate is expected to bankroll any bid he might make for the Liberal leadership.

While publishers gear up for a springtime deluge of books about John Lennon, the former Beatle’s widow, Yoko Ono, is quietly completing a record album the couple was preparing before Lennon’s murder last December. Jack Douglas, who produced the last album, Double Fantasy, is working with Ono, and Lennon’s son Julian is rumored to be playing drums on at least one song. Julian, 17, has made one previous record, as the backup drummer on his father’s 1974 record Walls and Bridges, when he was 10. John and Yoko were in the studio the afternoon of the murder working on a new song called Walking on Thin Ice just hours before Mark David Chapman gunned down the musician.

The fact that Peanuts hound Snoopy enjoys gliding around a birdbath on skates dreaming of hockey is an accurate reflection of creator Charles Schulz’s personal ambition. The Minnesota-born cartoonist is a disgruntled hockey aficionado, who enjoys passing the puck now and then at an arena he built near his Santa Rosa, Calif., home. Next week Schulz will be in his glory amidst a panorama of high-sticking heroes when he is awarded the Lester Patrick Trophy at the NHL all-star din-

ner in Los Angeles. The award is offered for outstanding service to hockey in the U.S., and previous winners include Bobby Orr and Phil Esposito. Schulz thinks the award is an appropriate gesture because his passion for hockey has been frustrated since the NHL’s Oakland Seals vanished from his neighborhood in 1976 and set up shop in Cleveland. “I can’t see a game live,” he grumbles, “and there’s next to nothing on TV. Rats!”

Reverse nationalism will permeate the CBC radio airwaves on Feb. 21 when the program Audience presents the first of at least two shows based on Canada’s most forgettable poets. “It’s strictly tongue in cheek,” says producer Katherine Carolan. “It’s a counterbalance against the current wave of nationalism that says every Canadian writer is the greatest.” The two poets featured are James Gay and James McIntyre, who wrote poetry that doesn’t scan around the turn of the century. McIntyre, who is known as “the cheese poet of Guelph,” wrote rhymes on cheese rounds for southern Ontario dairy displays, while Gay proclaimed himself poet laureate of Canada for such almost-rhyming verse as: Infidels say this is all farce/Samson never killed his enemies with the jawbone of an ass/All these sayings spring by chance/Just like Paris, the city of France. The great bad poets were selected from a book called The Four Jameses/Canada's Four Worst—and Funniest—Poets, an underground hit written by William Arthur Deacon in 1927. Two poets, James MacRae and James D. Gillis, are not celebrated by the CBC. Explains Carolan: “It was an arbitrary decision. The other two made us laugh more.”

With the homespun wit of former first mother Lillian Carter returned to the peanut patch, Washington first-family watchers have been busy trying to find a replacement for “Miz Lillian.” Enter Edith Davis, 84, mother of Nancy Reagan and a former actress with a vaudevillian sense of humor backed by a bent for risqué jokes. So far Davis has remained in the background, but among secret service agents she has a high profile. Reportedly, one secret service agent hasn’t recovered from walking into a room and encountering Davis coming out of her bath without benefit of bathrobe. As unruffled as she was unclad, the dripping octogenarian calmly told the agent: “Now you’ll have to marry me. No one is allowed to see me in the buff except Dr. Davis.”

I will never sleep with one of my fans. Somehow, the mystery would disappear,” confesses recording artist Plastic Bertrand (pronounced Plaz-teek Bear-tron). Born Roger Jouret in Brussels 22 years ago, Bertrand’s plastic has reached both English and French audiences. His first multimillion seller, Ça Plane Pour Moi (a nonsense lyric set to a power punk beat), topped hit parades around the world and his most recent release, Stop Ou En-

core, is an across-the-board smash in Quebec. Currently on tour in Quebec, Bertrand’s appearances create hysteria among his teen and preteen fans. “At first, they just stare at me. It’s like I’m a Martian. When they realize it’s really me, they go crazy,” says the immodest singer, who is set to follow Elton John’s platform boots and tour Russia in 1982. Says Bertrand: “My mother is Russian, so it will be like going home for me.”

Cornelius I, beloved leader of the Rhinoceros Party, will be traded from Quebec’s Granby Zoo to the San Diego Zoo in California for a giraffe this week, leaving the party faithful in a hoof-stomping rage. “At first we thought Cornelius was being held hostage,” says John Douglas, postmastergeneral in the party’s shadow cabinet, “but then we learned he was retiring from politics to become a management consultant for the Reagan administration.” Douglas says the 14-month-old rhino has delegated his eight-year-old mother, Pistol, who lives at the Metropolitan Toronto Zoo, to be leader “pro tem.” “We don’t think Pistol’s name fits with the peaceful nature of our party, so we plan to ask the zoo director to change her name to Chrystal,” advises Douglas. According to retiring General Manager Tommy Thompson, that might be hard to do. “I don’t think Pistol should submit to politics that easily,” he says. Douglas, however, has threatened to change her name unilaterally.

While teen-age girls in North America rub knees and swoon over the likes of Leif Garrett and Scott Baio, in Sweden it’s 16-year-old Ian Tracey of Maple Ridge, B.C., who is steaming up the saunas. Tracey stars in the TV series Huckleberry Finn and Friends, produced in Vancouver by a Canadian company in conjunction with Wagner-Hallig Films of Frankfurt. So far the show has been seen in Europe, but it has yet to reach North America. “I think you are very lovely,” wrote one of many 15-year-old pubescent fans who have pledged their affection and requested a picture and letter. “I think it’s a nice gesture,” says the Grade 11 student, who is currently working on another made-in-Vancouver-for-German-TV series called The Minikins, in which he plays an eight-inch-high character struggling to save the homeland from a full-grown architect. Being a star overseas hasn’t given Tracey any social edge in Canada. “I’ve never used it,” he admits. “I think they’d tell me to take a hike.” 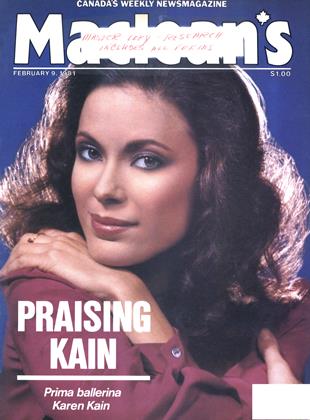