The forest primeval and the skyscrapers Anthony Whittingham March 16 1981

She was one of the big ones—the kind that usually get away, staring back out from the cool shadows after biting off the bait and spitting out the hook. Abitibi-Price was a tough, wily old trout—the kind of company that knew how to look after itself and had the scars of many years to prove it. So it was surprising that the end came as it did—that mighty Abitibi was captured last week with so little fight, so quietly, so deftly, and by an angler with such unexpected skill. The $536-million take over of Abitibi-Price Inc. by Olympia & York Investments Ltd. (O&Y)—the world’s largest newsprint manufacturer swallowed up by what may be the world’s largest real estate developer, both based in Toronto—seemed a bit like the world turning upside down. “In terms of traditional Canadian wealth and resources,” says Vernon Schwartz, vice-president of the Bank of Montreal, a senior banker close to Olympia, “it wasn’t so long ago that you’d expect Abitibi to be doing the take-over, not the other way around. That’s how much things are changing.”

It took five weeks of bids and counterbids for O&Y to win a total of 88 per cent of Abitibi at $32 a share, and it involved counter-bids by three of Canada’s richest families—but it never really became a “war.” Even though, as insiders acknowledge, Abitibi management and directors had no wish to see their company taken over by a single outside investor, there were no protracted legal battles, no hostile public relations campaigns, no devious blockades set up to interfere with the bidding or free movement of shares. Abitibi Chairman Thomas Bell, well-known in the business community for his gruff manner and his negative views about unwanted take-overs, scrupulously avoided hostile conduct in public throughout the affair. Abitibi directors duly deliberated over each bid on behalf of shareholders, recommending first one, then another, as the bids improved. Three families of huge wealth—the Pathys of Montreal, owners of the Fednav Ltd. shipping empire, the Thomsons of Toronto, holders of newspaper, retailing and natural resources, and the Reichmanns of Toronto, owners of Olympia and other interests (see box)—jostled for the bidding, but there was no nasty scrapping. Even the “white knight” engineered to counter Olympia’s bid—a joint offer by Thomson and the Nu-West Group Ltd., a Calgary development and resources company, to purchase 45 per cent of Abitibi—let its offer speak for itself and then fade, without additional recourse to secret share purchases.

It was, in short, completely opposite to last summer’s now famous Royal Trustco Ltd. take-over war, during which the trust company and its corporate friends went to great lengths to repel a take-over bid by Ottawa developer Campeau Corp. “I think it’s precisely because of Royal Trust that the Abitibi take-over went the way it did,” says Duff Scott, executive vice-president of Greenshields Inc., the brokerage house close to the centre of both the Royal Trustco and Abitibi affairs. “There were a lot of unpleasant lessons learned from the last experience which

everyone was scrupulously avoiding this time.” It was almost as if Abitibi didn’t dare fight back.

For two institutions in particular— Greenshields itself and the Toronto law ofirm of Davies Ward & Beck—the link between Royal Trustco and Abitibi was fraught with special irony. During the Royal Trustco affair, Greenshields broke ranks with other “establishment” brokerage houses to represent Campeau, the raiding company. During the Abitibi take-over war, however, Greenshields played the key role on the opposite side, in effect helping Abitibi with the “defence.” It was Greenshields that had brought in West Fraser Timber Company Ltd. to be a conciliatory shareholder two years ago when Abitibi was threatened by a dissident shareholders’ revolt led by Andrew Sarlos and Maurice Strong, a rumored takeover attempt that Abitibi crushed with vengeance. Greenshields stepped in again to engineer Fednav’s gradual purchase of Abitibi shares starting last fall, and, later when this investment was threatened by O&Y’s bid, brought Thomson and Nu-West together for their joint offer. According to street rumor, Greenshields approached more than two dozen companies—ranging from Dome Mines Ltd. to Noranda Mines Ltd. to Brascan Ltd. — to see about a public counter-bid for Abitibi, but only Thomson and Nu-West were interested. Abitibi’s official financial adviser, Wood Gundy Ltd., meanwhile approached the Seagram Co. in New York on Abitibi’s behalf, with no luck.

For Davies Ward & Beck, the relationship went in reverse. A key organizer of the Royal Trustco “defence,” the law firm on this occasion spearheaded the attack, acting as solicitor for victorious Olympia & York. Through its long-standing connection with the Bank of Montreal (as builder and owner of First Canadian Place, the bank’s Ontario headquarters) and Canadian Imperial Bank of Commerce (CIBC), O&Y was easily able to arrange lines of credit, without even having to disclose the amount borrowed. According to close sources, however, the B of M offered up to $189 million and CIBC a further $500 million to finance the Abitibi take-over (enough to enable O&Y to extend the bid to $35 per share if forced by a higher competing bid).

The consequences for Abitibi? Canada’s second-largest forest products company (after MacMillan Bloedel Ltd. of Vancouver) and world’s largest producer of newsprint now will likely soon disappear off the stock market and into the private hands of Olympia & York. For tax reasons, some analysts expect O&Y to shuffle Abitibi into the portfolio of Brinco Ltd., the resources and mining company in which it bought a 50.1-percent interest last summer. Analyst William Proctor of Gardiner Watson Ltd. says O&Y’s purchase shows it is betting on continued high consumption of newsprint, sustained high inflation and a depressed Canadian dollar to boost Abitibi’s earnings—all of which would vindicate Abitibi as a shrewd investment for the Reichmanns.

As for the Reichmanns themselves, owning Abitibi isn’t going to make them any less elusive (“I have to fly to New York to have supper with them,” laments one Toronto banker). And as Abitibi isn’t likely to be a public com-

pany much longer, owning it won’t place the family more on public view either. “We have always preferred to remain private in our affairs,” explains Paul Reichmann, second of the three brothers controlling the affairs of O&Y. “That’s always been our way, long before our company became big or we became rich. Surely no one can begrudge us that.” 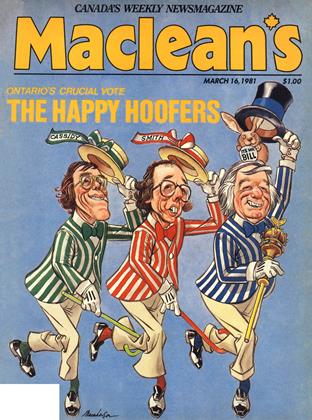