With the unhappy mien of the class chess player caught with a spitball, Mark MacGuigan hid the evidence and made his excuses last week in an effort to close the Sir John Ford case. The external affairs minister had told the Commons on Feb. 5 that he was investigating charges of what he called “completely unacceptable” constitutional lobbying of MPs by Britain’s high commissioner to Canada. Eleven days later the minister was reading his obscure conclusion into Hansard to derisive hoots from the opposition. After terming “entirely appropriate” Sir John’s speaking for the British government and reporting British politics to Canadians, the minister came to the point—such as it was. “There are indications that the high commissioner went beyond these normal functions into internal political matters.” The British had asserted they had no intention to intervene in Canadian affairs, he added. “I now consider the matter closed.”

MacGuigan’s public acknowledgment of the original allegations had stirred turmoil into what were already tense relations between the Trudeau and Thatcher governments over the constitution question. In the end, the minister refused to disclose any grounds for even the mildest complaint of impropriety. Since the constitution involves politicians in both countries, it now must be risky for diplomats on either side to decide whose “internal political matters” are whose.

In the Commons, MPs began what they sensed to be a historic final debate on Pierre Trudeau’s constitution. Justice Minister Jean Chrétien opened with an 1865 quote from George Brown’s speech in an earlier constitutional debate: “I cannot help feeling that. .. the agitations in the country and the fierce

contests in this chamber ... are all compensated by the great scheme of reform which is now in your hands.” Chrétien rested his case largely on the proposed charter of rights—“a good reflection of the hopes and dreams of Canadians.” And he attacked the Tories’ call for a charter from which provinces could unbind themselves. Said Chrétien: “If we want to have a charter of rights, it must apply to all Canadians.” Jake Epp, Conservative constitution spokesman, argued his party’s objections: Ottawa’s action without provincial assent, an amending formula giving Ontario and Quebec vetoes over future constitutional changes, and the proposed federal power to stage referendums on future changes. Urged Epp: “Let us have one more go at it with the premiers.” Siding with the Liberals, New Democrat leader Ed Broadbent said federalprovincial talks have proven to be futile conflicts. The Tories dreamed of constitutional change without divisions. “Well, history just ain’t like that. It is a little more uncomfortable,” as the history of nation-making around the world has shown. Broadbent, of course, had particular discomforts of his own last week, as four of his Saskatchewan MPs declared their opposition to the Truo deau project. The four, including party a whip Lome Nystrom, acted in tandem a with Saskatchewan Premier Allan Bla“ keney’s finally announced opposition, o Blakeney’s stand was telegraphed x

weeks ahead; he was never satisfied with federal compromises on resource management and was annoyed when the Liberals restored the Senate’s veto over future amendments—power, in other words, to block its own reform. Trudeau, left without the support of a single western premier, was undeterred. Canada must erase its “dismal and dishonorable record of failure” to give itself a constitution, he told a Vancouver audience. “If we fail now ... we will have failed forever.” —JOHN HAY 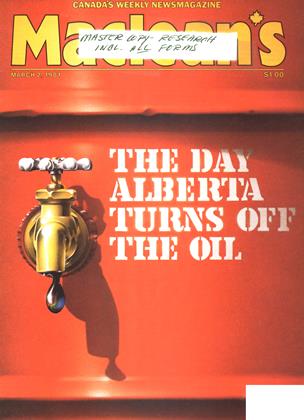