I must register my protest to your article The Day They Turn It Off (Cover, March 2) on Alberta crude oil cutbacks. I found the report full of editorial sensationalism. While calling for “cool heads in a period of hot passions,” your article did little for the cause by speculating about the “sabotage of oil facilities” and pondering the possibility of Central Canada stepping in to “wrest control of oil delivery from Alberta.”

In your major article on the oil industry, it was stated that NOVA Corporation spent $2 million on a new logo developed by an American design firm. This is absolutely incorrect; NOVA’S logo was designed by a Vancouver agency several years ago and has not been changed. The $2 million referred to was the cost to NOVA to produce and advertise its new name in print and on TV. All design work was done by Canadians with the advertising dollars going to Canadian companies such as Maclean Hunter. We have never gone outside Canada for such work because that element of Canadian business is extremely competent.

The editorial in the March 16 issue stated that Exxon took a third of its profits in the third quarter of 1979 from Imperial Oil. In fact, Exxon ’s profit for the quarter was $1.15 billion and the Canadian subsidiary's profit for the equivalent three months was $131 million. Maclean’s regrets this error.

organization, while having had some problems with a rain-delayed program of our debut show, endeavored to present a beauty and personality show of the highest order, representative of contemporary Canadian womanhood. Ms. Amiel, with her creative style of reasoning, seemed to delight in wilfully misrepresenting the case. Needless to say, Ms. Amiel’s association with our pageant was unfortunate ... a mistake we are unlikely to repeat.

I read with interest your article Excavations of the Entrepreneurial Kind (Archeology, March 2). The quality of a consultant’s work will always be in doubt as long as he is mainly answerable to his client. I feel that contract archeology should be monitored by a neutral agent working under a strict set of guidelines that cover excavation, reportage and publication. A site can only be dug once; mistakes and omissions cannot be corrected. Your statement that archeologists take “radiocarbon dates ... on stone tools” is incorrect. Radiocarbon dates may only be taken on organic material.

The errors of our ways

I would like to thank writer Suzanne Zwarun and Maclean's for your article No Exit for Entrance (Canada, Feb. 16). However, I would like to point out a couple of errors. First, Entrance is 300 km from Edmonton, not 30 km as stated. Secondly, the caption with your article named the person behind the store counter as Warren Hall, whereas it is his sister, Heather Hall. For those of us who have lived in Entrance, the unique blend of Rocky Mountain beauty, history and tranquillity will always have a special place in our hearts. Unfortunately, the peace in Entrance is shadowed by the constant fear that it will end under the blade of a bulldozer.

I would like to congratulate Maclean's on its recent roundup of new Canadian novels (Fiction From Coast to Coast, Books, Feb. 23). Aside from my obvious delight in being reviewed in Canada’s national newsmagazine, I think you performed a valuable service to readers with both the sweep and quality of the article. In these hardly heroic days of reviewing, it is heartening to see Canadian cultural identity given voice in a national magazine of mass circulation, and not just in daily newspapers or literary journals. Your feature set an example that should be followed. The quality was excellent and the article was of more than narrow literary importance. —M.T. KELLY,

A war of words

I am disappointed with your article Playing Tricks on a Blind Man (Canada, Feb. 23). I am not convinced that this level of reporting serves the cause of the natives in Canada and, in particular, the Inuvialuit. In October, 1978, the government signed an Agreement in Principle with the Committee for Original Peoples Entitlement (COPE). We are presently engaged in translating these concepts into a final agreement. Both parties have raised concerns that have to be addressed in the spirit of give and take at the negotiating table. The Hon. John Munro, minister of Indian affairs and northern development, has repeatedly stated to COPE and to the public that the federal government is committed to negotiate toward a final settlement of the Inuvialuit claim on the basis of the Agreement in Principle. The inference that the federal government is not fully dedicated to the achievement of a just and equitable settlement certainly does not reflect the time and effort that it has devoted and will continue to dedicate to that end.

As a witness to the signing of the Agreement in Principle between the federal government and the people of the Mackenzie delta area, I am appalled that the feds have backed down. How dare those know-nothings at Indian Affairs change the rules again, more than halfway through the game. I swear they change ministers so often just to keep all the land-claims negotiations off-balance. I suppose it has been said before, but I really think the only reason land claims are being dealt with now is that

the big-money guys are interested in what used to be considered the frozen wastes. Hang in there, Sam Raddi. Don’t let those creeps in Ottawa wear you down. —ANNE SANSOM,

One point deserves to be added to Judith Knelman’s crisp article on independent schools (A Public Withdrawal Into the Private, Education, Feb. 23). The strongest demand for places at this school and others like it, in my experience, does not come from youngsters who need “strong discipline,” but from eager, ambitious boys and girls who have been bored or turned off in school by soft courses and flabby marking. It’s tragic that some youngsters “need discipline”; it is far more tragic that so many able young Canadians are cheated of the opportunity in school to work hard, or to tackle courses that will stimulate and stretch their minds. All Canadians are the losers when keen youngsters are robbed of the chance to develop their talents to the full.

A question of trust

In your article His Truths and Consequences (Canada, Feb. 16), Pierre Trudeau is quoted as saying, “It is for the Canadian people to judge what we are doing.” How are we to properly judge the issue when the prime minister has lied to us about what was actually said with British officials? President Richard Nixon had to resign because he lied to the American people. Should we expect less? That issue was not as important as our constitution. I do not believe that Pierre Trudeau can be trusted on the issue of a constitution. He does not want the people of Canada to decide. He wants to decide for us.

Your article The View From Canada's Highest Pedestal (Profile, Feb. 23) on Ed Schreyer highlighted how sad it is to see a man who was once a successful, active politician turned into the reigning custodian of a political limbo. To say that Schreyer performs well in his job as royal eunuch is a dubious honor indeed. —RICHARD J. MCGOWAN,

Letters are edited and may be condensed. Writers should supply their full name and address, and mail correspondence to: Letters to the Editor, Maclean’s magazine, J¡81 University Ave., Toronto, Ontario, M5W1A7. 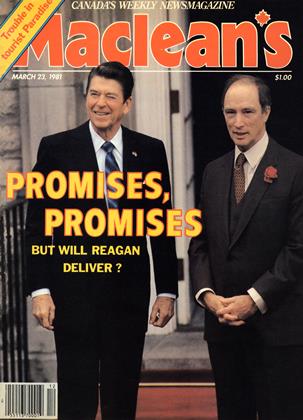