Minutes before General Roberto Viola stepped from his black bulletproof limousine in Washington last week, a bodyguard scurried to patrol the pavement the Argentine leader would have to cross to attend a private reception. The snout of a submachine-gun protruded below the man’s loose-fitting jacket. Viola needs that sort of protection. So do other foreign guests that President Ronald Reagan is inviting to the nation’s capital. In the month before Viola’s visit, Washington hosted Chilean, Brazilian and Bolivian military envoys. Others from Guatemala, another major human rights offender, are soon to receive an invitation. All four countries are likely candidates for military aid.

Viola, who will be installed as president of Argentina at month’s end, presided as army chief of staff over the arrest and disappearance of more than 6,000 people since 1976. It was their fate that led the U.S. government to refuse military arms sales in 1978. But after Viola agreed to support the U.S. position on El Salvador, Reagan invited him

to Washington, and last week, after the two leaders had met, Undersecretary of State James Buckley said Congress would soon be asked to sell Argentina military equipment worth about $100 million.

The week that witnessed this aboutface was also marked by further allegations from Secretary of State Alexander Haig. In two days of testimony before congressional committees, Haig zigzagged on at least three major issues.

Accusing the Soviet Union of “international terrorism” and of having a “hit list” for domination of Central America, he claimed that Nicaragua had already been “lost,” said the U.S. was considering military “options” to stop Cuba from arming leftist rebels in El Salvador, and added that the three American nuns killed by Salvadoran government forces last December died in “an exchange” of gunfire after they may have tried to run a security roadblock in their van. There was a public outcry on all three points, and Haig backtracked. But later he returned to the attack, charging that Nicaragua was receiving sophisticated weapons systems from Eastern Europe.

As on previous occasions, Haig seemed to be pushing a foreign policy based on accusations backed only by vague references to “intelligence sources”—and at week’s end there were signs that the patience of U.S. allies in Europe, as well as critics at home, was being tried. Attempts by a Reagan envoy to persuade the European Community to withhold aid to Grenada, the Caribbean island that has close ties to Cuba, were said to be partially responsible for the high place on the agenda for this week’s summit meeting of Community leaders accorded to moves to strike out alone in the foreign policy field. -WILLIAM LOWTHER 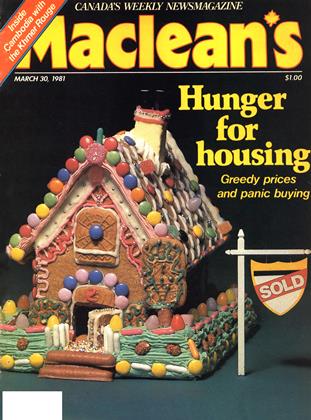