At midnight on Feb. 6, about 1,500 protesters took to the streets of downtown Toronto, calling for police resignations and carrying signs that read “liars, bigots, Nazis,” as they headed for the provincial Parliament Buildings. In a country that has remained calm in the face of the RCMP opening mail, passive as women’s groups pressured the CBC into proscribing words like “mankind” and indifferent to the Ontario Human Rights Commission calling for the banning of a university newspaper, what was the issue that drove these milling crowds into the cold winter night? Simple. For one night the freedom to copulate en masse had been interrupted, underlining once again that the declining interest in freedom of speech in this country is matched only by the rising preoccupation with the freedom to fornicate.

The night before, about 150 police raided four Toronto steambaths and arrested 286 people on charges ranging from being found-ins at a bawdy house to committing buggery. Though it will be up to the courts to decide what went on at the baths, there seems to be little disagreement that a good time consisted of lining up to rent a tiny cubicle with locked door where patrons could engage in sexual acts. Nothing new about that. What was new, however, was the response. The steambaths were homosexual, and charges of discrimination were immediately levelled at the police. The Canadian Civil Liberties Association—maintaining its near spotless record of missing the pointjoined the protests and called for a public inquiry into this harassment of minorities.

Harassment of minorities? Let us put aside for a moment the question of whether the police were right or wrong in conducting the raid. What they did, alas, was standard procedure for the enforcement of any of our morality laws. Every day of the year police are out raiding gaming houses, interrupting strippers’ performances, moving in on

“swingers’” clubs and arresting those unfortunate men whose peculiar taste or desperation drives them to proposition undercover policewomen. A few years ago it took 20 policemen with guns and dogs to storm a room in a Toronto hotel and capture a dozen elderly Jewish men playing poker. They had been meeting every week for 20 years, ever since their wives had expelled them from their homes for smoking cigars. Though political expediencies may dictate who they hit this week, as long

as our Criminal Code and society give police the power and budget to enforce these marginal areas of moralitywhoring, gambling, indecent acts and so on—the police do so, as prominent lawyer Edward L. Greenspan put it, “with gay abandon, regardless of their targets.”

It is a separate question as to whether these laws should remain on the books. Canadian society seems plagued with a plethora of petty prosecutions originating from the work of morality squads. A common bawdy house, for example, is simply a place where physical acts for gain and sexual satisfaction habitually take place. On these grounds a sixmonth investigative team managed to nab three unlucky but eminently heterosexual couples at the Toronto swingers’ club Pluto’s Retreat.

One is inclined to say that the law should not interfere with such acts between consenting adults unless they can be shown to be disruptive to the community-at-large or uninvolved persons.

Homosexual steambaths don’t seem to disrupt anyone or anything—though the allegedly staggering scale of the operations (174 cubicles in one of the baths, with each cubicle being said to change occupants up to 10 times a night) might argue for a legalized redlight district to cope with the flow of people and traffic.

It should be obvious to anyone who takes the trouble to think about it for 10 seconds that heterosexuals found engaging in such acts under such conditions and on a large scale are prosecuted in exactly the same manner. It is a valid, but totally separate question that perhaps they shouldn’t be, and neither should homosexuals. The intriguing difference is that if heterosexuals took to copulating in public washrooms or steambaths, they would not expect their actions to be without legal consequences. They would understand that it is not their “sexual orientation” that is being prosecuted but their vices. This dis-

tinction escapes militant homosexuals and their champions. Homosexuals “are certainly not the only

group with vices—if licentiousness, promiscuity or prostitution are vicesbut they are the only group who expect to get away with them scot-free.

For civil libertarians the lesson to be learned from the raids is that the brutality and callousness normally used by police in enforcing morality laws is unnecessary and wrong. The lesson isn’t that, in this instance, the police’s zeal was unusual. One can only wish that it had been. Criminal lawyer Greenspan estimates that damage to property in most morality squad charges he handles works out to about $500 per arrest. This makes the steambath raids, at about $140 damage per arrest, a bargain.

Perhaps another lesson may be that most of these laws should not be on the books in the first place—but that is for the whole community to decide, not simply the coterie of sophisticates whose jaded tastes can only be satisfied by saturnalias. 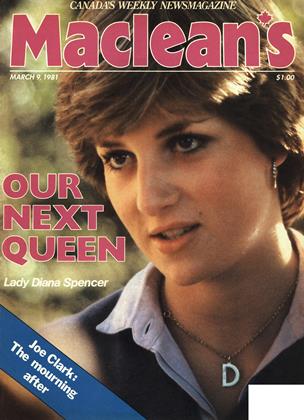