I really enjoyed your delectable cover Hunger for Housing (March 30). The gingerbread house looked scrumptious enough to eat. But where did you get the blue Smarties? —BETTINA FRAEDRICH, Scarborough, Ont.

The last paragraph of your article on real estate was, in my opinion, undoubtedly the stupidest comment, not only in this article but in any article, on housing I have read in 20 years. To suggest the government is “absorbing 1979 revenue losses of $2.6 billion from taxes it might have levied ” boggles the mind. How can a government absorb losses of revenue to which it was never entitled? It is similar to suggesting the government is absorbing revenue losses from increased taxes it might have levied on magazine industry profits. In addition, I wonder if it ever occurred to you just how much more costly Canadian housing would be if the government took a piece of the action.

In your story The Sidelined Statesman (World, March 23), you report a “falling out” of the German coalition leaders over, among other things, “their feelings about Ronald Reagan.” I have to deny this because it is not true. There are no differences between the coalition partners regarding the assessment of the new U.S. administration and its president. Chancellor Helmut Schmidt

has known the president for a long time, and he met him in Washington shortly before the inauguration. The chancellor is looking forward with confidence to the close co-operation the president has announced, and has been encouraged in this view by the reports that Hans Dietrich Genscher brought with him from his recent visit to Washington.

I want to protest the injustice done Shell Canada in your recent column, It's Time to Tame the Tiger (Podium, March 30). The column centres on a footnote from the Bertrand inquiry into the petroleum industry. Typical of the Ber-

trand approach, a preconceived conclusion has been determined. Then, two sentences, taken out of context from a three-page Shell memo, have been used to prove the conclusion. The memo deals with the possible purchase of a gasoline distributorship owned by a Gaspé businessman-referred to as Romeo. The Bertrand report quotes Shell’s memo as saying: “Romeo probably also had the ability, typical of small businessmen, to operate at costs which major companies will never duplicate. His operation will almost certainly fare less well as one more district of Shell Canada.” The impression given is that Shell couldn’t compete with Romeo, so we bought him out instead. It just isn’t so. Read in full, the memo demonstrates that Shell admired the distributor’s expertise and drive and, in fact, preferred that Romeo’s operation stay in private hands. Mr. Romeo was never competing with Shell Canada. He was an independent jobber who purchased gasoline from Shell and resold it. There is no evidence of Shell trying to suppress an efficient businessman; rather, the memo shows that Shell appreciates the motivation of the independent entrepreneur.

Oh how I loved Allan Fotheringham’s Keeping the Premises column (March 30). He should keep in mind, though, that it is “piffle” to clump all Ontario voters in one pile. Some of us long ago saw the light and don’t cast our ballots for Mr. Tedium, alias Brampton Billy.

To my mind, the real problem in the grain-handling system is that CP Rail refuses to move grain unless it is profitable for CP Rail to do so, and the federal government is apparently prepared to watch Canadian grain exports falter and Canadian farmers lose millions of dollars rather than order CP Rail to perform the essential service of moving grain (Gunning for a New Crow, Canada, March 16). If legislation ordering CP Rail to move grain was introduced with the same enthusiasm as the War Measures Act, the so-called “grain handling problem” would no longer exist.

From Susan Riley’s A Case of Cowardly Betrayal (Podium, March 16) one might surmise that she has not been in the province of Quebec in recent years, or even heard of the infamous, racist Bill 101. Unlike New Brunswick, Quebec is not officially bilingual. Only in the judicial field is Quebec bilingual. In all other aspects of normal day-to-day existence, Bill 101 created a unilingual francophone community.

I wish to congratulate Susan Riley for her illuminating and honest article on Franco-Ontarians, who, I believe, are truly betrayed by every political party in Ontario, and Canada.

In my opinion, Susan Riley, like many Canadians, is suffering from tunnel vision. Canada is composed of many cultures—the original inhabitants being neither French nor English—and is in need of a unifying element common to all cultures. We should extricate ourselves from our cultural microcosms and fragmented societies and be more concerned with our country as a unit. Canada is one country and Canadians are one people. —DOUG FREMLIN,

If the English had lost on the Plains of Abraham, French-only would be the law—but thank God they didn’t. We are an English-speaking nation that has opened its doors to all races—expecting these people to accept our laws and language without bitching. English and English only in Canada —what Quebec does is its affair. —R. MILLS,

Canada is never going to amount to anything until it has one official language—the language of the majority. The Italo-Ontarians are my idea of real people. They maintain their language and culture, and are a hardworking, industrious, happy and friendly people, highly respected by everyone. Let the Franco-Ontarians pattern themselves after the Italians and quit their bellyaching. — D.H. BAKER,

Queening it over us

The Splendor That Is Queen's (Column, March 16) was an insightful glimpse into the calm tradition, seclusion and timelessness that is uniquely Kingston’s, colored red, gold and blue with the enthusiasm of youth, alumni and academic excellence that is uniquely Queen’s. Issues here do tend to “simmer” as opposed to “rage”; how true. However, one inaccuracy in the column that we cannot allow to “simmer” amidst our “tranquillity” is that Alfie’s

is a disco. God forbid that we should be portrayed as so temporarily crazed. Good old reliable rock ’n’ roll is still as much an institution of tradition and fierce loyalty here as is Queen’s itself.

The ties that were created in private schools such as Upper Canada College and Havergal are strengthened at Queen’s, and will probably continue to bind in the world of business and politics. If the sons and daughters carry on in the tradition of their fathers, and bring “the lack of frenetic debate” and friendly camaraderie to Ottawa, it can only lead to an unbalanced and sadly unargumentative set of leaders in Canada. —KATHY MCKNIGHT,

Perhaps I missed the point of Allan Fotheringham’s drivel, but am I supposed to be upset that by not going to Queen’s I cannot rub elbows with Michael or Beth Crosbie, Hugh Blakeney or Jim McMurtry? Or perhaps I should be upset that I must tolerate the presence of blacks, Caribbeans and Southeast Asian imports at my more urban university while those at Queen’s have only to acknowledge the presence of a minuscule sprinkling of such people? If Fotheringham wants to write about Canadian universities, would it not be better to write about the federal government’s rumblings about reducing their share of funding for post-secondary education across Canada? This federal plan could result in education in Canada being available only to the upper-middle-class type mentioned in Fotheringham’s column. — D. FRATTINI, 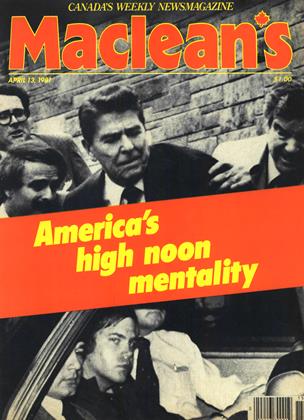