The day after Pierre Trudeau made his constitutional address to posterity last week, Justice Minister Jean Chrétien flew off to London to meet a more immediately critical listenership: the politicians at Westminster who must soon vote on the Trudeau package. For the prime minister, in the closing days of the debate in Ottawa, it was a time to speak as much for history as to Parliament: for more than two hours he argued his case for “sloughing off the last vestiges of colonialism.” Declared Trudeau: “It is our duty to leave behind us at least the ability to our successors to choose Canada’s destiny.” Chrétien, however, soon discovered that those old colonial ties binding Canada to Britain are more than just vestigial—they are knotted in the politics of the British Parliament.

In affable but frank talks with Deputy Foreign Secretary Sir Ian Gilmour and the government house leader, Francis Pym, Chrétien was reassured that Margaret Thatcher’s cabinet has nerved itself to follow constitutional precedent and push the Canada Act through Westminster—as British governments have done with Canadian constitutional amendments since 1867. But they also

told Chrétien he is running out of time if Trudeau is to meet his desired July 1 deadline for final patriation of the British North American Act—with its proposed new charter of rights. Chrétien could only tell them he hoped to have the resolution passed by the Canadian Parliament this week, to be in the Queen’s hands a few days later.

Even some of Trudeau’s most voluble critics in the Mother of Parliaments now believe the Canada Act will pass the British Commons and perhaps the Lords with little more than a week of debate—a blink of an eye by Ottawa standards, though painfully long for the busy schedule of Westminster. “We all want to see the back of this thing,” sighs Sir Anthony Kershaw, the monocled chairman of the house foreign affairs committee. Not that Kershaw and many others have forsaken their objections: his committee reported in January that Westminster must act as the guardian of Canadian federalism, and Kershaw still thinks the bill should be defeated because too many provinces oppose it. But he now thinks this opposition, springing from both sides of the Commons, will likely fail. MPs are losing their enthusiasm for an issue of no eco-

nomic or political consequence to Britain, which has nonetheless tormented politicians and diplomats in both countries for months.

There is a fear, apparently felt by a growing number of MPs, that even if Britain is Canada’s guardian (which many others deny) it is simply not worth the diplomatic damage and bad will that blocking the Canada Act would entail. It’s a fear that Canada has been exploiting by way of a detailed reply to the Kershaw report released in Ottawa last week and immediately mailed off in bulk to Westminster. It says that following the Kershaw doctrine by forcing new attempts at federal-provincial compromise “would prolong Canada’s constitutional impasse indefinitely and would seriously jeopardize relations between the two countries.” The pamphlet says Kershaw’s way “would constitute intolerable interference in the internal affairs” of Canada. On the other hand, as Chrétien less belligerently put it at London’s Canada Club, passing the bill as asked would mean “the strengthening of our friendship, a reaffirmation of our loyalty to the Crown and of our partnership in the Commonwealth of Nations.”

Chrétien’s main asset as the Canada Act reaches Westminster is, of course,

the indifference it provokes among nearly everyone in Britain: most MPs will be inclined to do what they’re asked. But months of intense lobbying by the provinces, and more recently by the Canadian High Commission, have left their mark. Both Conservative and Labour opinion is divided on the issue. Among those taking the provincial side is MP Jonathan Aitken, who helps run an investment bank inherited from Canadian-born press baron Lord Beaverbrook, his great-uncle. Aitken is planning harrying tactics: debates on the Kershaw report; motions to delay the bill until the provincial court tests are settled in Canada; procedural arguments. Aitken dismisses the notion that opponents of the Canada Act are merely acting in their own financial interests— cultivating provincial cabinets for the sake of their investments or trade in Canada. Still, the provinces seem to

have been most persuasive with MPs and peers with business links to Canada. The agents-general in London for five provinces—B.C., Alberta, Saskatchewan, Quebec and Nova Scotia—have been holding weekly strategy meetings, sorting out prospects to take to lunch and sharing intelligence from the halls

of Westminster. Especially fertile, from the provincial point of view, is the House of Lords, whose members include some real and some self-imagined constitutional experts and which blithely ignores appeals from party whips. Warns Aitken: “The Lords regard themselves as keepers of constitutional rectitude. They will be very sticky indeed.”

For Pym, who must pilot a heavy cargo of bills—including a budget and contentious immigration changes— through the Commons before the July 31 recess, the Canada Act is undeniably an aggravation. Still, he and Chrétien were hopeful enough to start planning the constitutional niceties—starting with who should bring the so-called “engrossed address” to the Queen, signed and sealed in wax from Governor-General Ed Schreyer. As for Pym’s worries, Chrétien could afford to be casual. “It’s a parliamentary problem in England. It’s not my problem.” 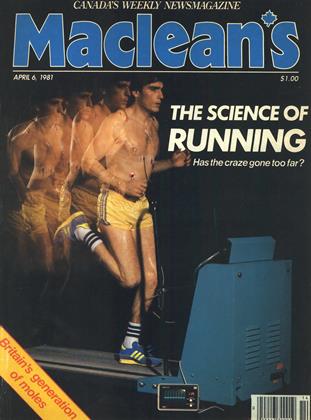