Dreams of a mad housewife Judith Timson May 11 1981

In the house of the Canadian literary establishment, there are many rooms. Picture the salon, where luminaries such as Margaret Atwood and Marian Engel take their tea laced with politics. Or the library, in which Robertson Davies is firmly ensconced with a glass of fine port. Out in the garden, Susan Musgrave is twirling arbund in the tulip patch. But where is Joy Fielding? She is unabashedly in the kitchen in her fuzzy pink slippers, quietly turning out a novel worth half a million dollars—so quietly, in fact, that the others don’t notice she’s there.

Fielding may well be an obscure Toronto writer whose name offers no literary cachet, but she has been plugging away for 11 years now, always aiming at that “larger market.” Her fourth novel—and first really respectable one— Kiss Mommy Goodbye, appears to have hit its target. A suspenseful and timely story about a divorced man who kidnaps his'two young children, it has, since its publication last spring, sold 25,000 copies in the U.S., been chosen a Literary Guild alternate, made the best-seller list in Canada and been auctioned off internationally for upwards of $150,000. Far from being taken aback by her recent commercial success, Fielding admits: “To be very honest, I’m surprised it took so long.”

Joy Fielding’s search for success has been nothing short of innovative: she invented herself much the way she would a character in her own books, setting out first to become a Hollywood movie star, and then, when that bombed, turning to writing. By that time there had been a slight change of identity. “This sounds rather pathetic, but after my agent told me Joy Tepperman was not the name of a star, I went down my list of famous writers and picked Henry Fielding.”

To get a sense of the literary distance she has travelled, it is only necessary to know that her third novel, Trance, a low-rent version of The Manchurian Candidate crossed with the Patty Hearst saga,featured on its cover the exciting come-on “First they ravaged her body, then they came back for her mind.” In contrast, her latest book is subdued, tasteful and much better written. The only come-on its cover features is a white banner wrapped around wrapped it proclaiming : SOON TO BE A MAJOR MOTION PICTURE. While that in itself has become a cliché—American activist Abbie Hoffman recently dispensed with preliminaries and called his latest book just that—it is still the badge of merit in today’s literary marketplace where success is a word that starts with a dollar sign and ends with Robert Redford directing a tasteful little movie of your book with, let’s say, Sally Field in the role of the housewife (or Goldie Hawn, suggests Fielding) and Burt Reynolds as the nasty husband.

Robert Redford has not yet been on the phone to Joy Fielding, but the folks from Samuel Goldwyn have, and for an initial payment of $20,000 she is already hard at work on the screenplay. Finding it tough going, she :was grateful the other day jwhen a visitor told her of a 5book she could buy about the art of screenwriting. For as she ingenuously explained, “it gives you all the basics and sometimes that’s exactly what I’m lacking.”

Fielding’s ingenuousness is the kind that doesn’t grate. At 36, married to a corporate lawyer, the mother of two little girls and the mistress of a rather grand new house, she appears to be the nice girl who got it all, managed it all and somehow deserves it all. Or as her longtime friend, film-maker and entrepreneur Johnny Bassett puts it, “a very, very sensitive, bright, intelligent person who would be good at anything she does.” Thankfully, there are a few baroque touches, a slight air, even, of the mad housewife about her. “I’m highstrung, but I’m working on it,” she explains, extolling the virtues of hypnotherapy. She appears dressed in blue jeans and sparkly pink socks slipped into those slightly tatty pink slippers, her outfit obviously a matter of comfort seeing as she spends much of the time administering to her daughters, Shannon, 5, and Annie, almost 2. In between negotiating potty visits and mediating sibling rivalry, Fielding confesses to feeling most comfortable, even when she’s writing, at the kitchen table. No room of one’s own for her. And no airs about the process she goes through—she appears to have raised her children with one hand while the other was busy writing four novels. While other writers might offer more esthetic reasons for their success, Fielding attributes much of hers to “live-in help.”

The comfort is as much a part of Fielding’s existence as her ambition to keep writing “because I enjoy it.” She may, in some symbolic and literal way, be in the kitchen, but it’s one of 11 huge rooms in a $625,000 palace in midtown Toronto that looks like a modern-day version of something Scarlett O’Hara might have hankered after. Tripping through the rooms on a slightly selfconscious tour, she is like any other wealthy Toronto housewife—riveted on her choice of tile in the upstairs bathrooms—except, of course, she has a screenplay to write and a substantial advance from Doubleday to produce her next novel, tentatively entitled The Other Woman.

Her confidence was nurtured early in what she now feels was “an incredible home.” Joy Tepperman’s father was a jewelry salesman, her mother a strong presence who encouraged her to think “ there wasn’t anything I wanted that I couldn’t have.” (Her mother died in 1976 of cancer, and the loss haunts Fielding. “I would give all of this up,” she says simply, “if I could have my mother back.”) She and her younger sister grew up in a modest neighborhood in Toronto, then in the more luxurious surroundings of Forest Hill. She went to the University of Toronto, where she majored in English and high hopes, resolving to become a famous actress. She even did a controversial nude scene in a movie called Winter Kept Us Warm, playing a “fast” girl called Bev. In real life, though, she says, “I wasn’t anything like that, I was kind of slow getting started with men.”

After graduating she decided, at the age of 22, she was ready for Hollywood. In Los Angeles she lived in an apartment building with a topless waitress, a hooker and a groupie, got herself a constant companion—a budgie named Rudi —and embarked on a life that would give her enough material for three novels. Once she went on a blind date to an orgy, a scene she parlayed with interesting results in two of her books. While she had her eyes opened by the seamier side of Hollywood life, she was also discovering dispiritedly that even though she considered herself “special-looking,” Hollywood casting agents didn’t. After she was reduced to working as a bank teller and dating fading actors, even her jaunty self-confidence was shaken. When her mother, visiting her, told her she was losing her spark, Fielding put her budgie in her purse and came home.

While in Hollywood, Fielding kept a fictionalized diary which she showed to an agent who told her: “I don’t think this will be published, but one day you’re gonna make a million.” That seemed encouragement enough. Moving in with her parents at age 25, she sat down at their kitchen table and concocted, in five weeks, The Best of Friends, an expletive-loaded story of a woman with a split personality. The kindest thing one reviewer had to say about her novel Trance, she remembers, “was that it was trash.” Even now, commercial rewards haven’t guaranteed gentle treatment at the hands of the critics: The New York Times reviewer might have written that he couldn’t stop reading Kiss Mommy Goodbye, but The Washington Post sniffed that it was best read “under the hair dryer.” Fielding doesn’t think that’s fair: “You don’t get the kind of quality dialogue in schlock books that you do in mine.” Even some reviewers who praised her book hinted there was more than a whiff of calculation about it—picking a hot theme with “movie” written all over£ it. Fielding demurs: “I wish I did knowj what sells, but I don’t. I wrote this books for me, because I wanted to do a love story.” And yet she cheerfully admits she is governed as much by her agent as by the muse. “My agent told me suspense sells, so that’s why I wrote The Transformation [her second book] and Trance,” she explains, either not noticing or not caring that such an admission might be taken as literary heresy. Kiss Mommy Goodbye was set in Florida because she and her husband have a condominium there and because “I would never set a book in Canada. No one in the States wants to read about it.”

That might stick in the craw of this country’s coterie of cultural nationalists, but it is perhaps only fitting for a writer who feels she has received “nothing but discouragement from Canadian publishers, nothing but encouragement from Americans.” Still, Fielding is not bitter, only amused. That larger market shimmers, the vision gets closer. In the end, her ambitions are no different from those of many writers: “I want people to think I am a good writer, and to look forward to my next book.” Her motivation, though, may be harder to grasp. “I write,” she says, “to escape.” With a laugh and a look at her surroundings, she catches herself. “Although one would have to be meshugga [Hebrew for crazy] to want to escape from this.” 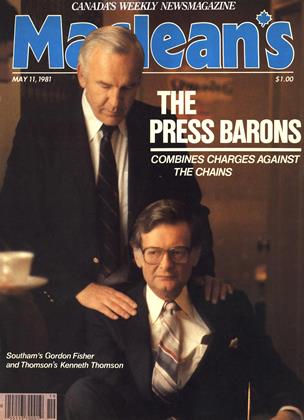