Rumors of an impending North American tour by the Rolling Stones next fall gained more credence last week when members of the 19-yearold band converged in New York to do some planning. Guitarist Keith Richards now spends most of his time there, where girl-friend Patti Hanson has a burgeoning modelling career. He has even taken to posing himself, allowing photographer Lynn Goldsmith to capture him in what is only the second formal sitting in his career. Stones fans will also be pleased to know that an album of new music is in the works. Recently Mick Jagger hauled jazz tenor saxophonist Sonny Rollins into the studio to lay down some distinctive tones over the usual grinding rhythms. Admitting that he’s not familiar with the Stones’s music, Rollins could only suggest: “It sounded like rock ’n’ roll.”

Like fellow conspirator Charles Colson, convicted Watergate felon Jeb Stuart Magruder found God had more answers than a tapped telephone. But after completing 2Jk years of study toward a master’s degree in divinity, Magruder, 46, took a large bite of the world of mammon. He became vicepresident of a dental manufacturing company, but false teeth evidently didn’t fill his plate. Now Magruder is back in divinity school and this time he promises to graduate. The former Nixon aide says he will probably sooner or later go into parish ministry.

It’s been 10 years since they were plucking my eyebrows for Singalong Jubilee,” says 21-year-old showbiz veteran Lisa Dal Bello. “I feel like I’ve been doing this a long time.” But things are just starting to happen for the singer-songwriter who topped Canadian charts two years ago with her song Pretty Girls—which has gone on to be a hit in the U.S. for Melissa Manchester. Dal Bello’s third album, Drastic Measures, is set to launch her career to a North Americawide audience already enjoying her backup vocals in the Boz Scaggs single Miss Sun. “I’m drawing from my experiences all the time,” she says. “When I was 19 and singing songs about love affairs, I was just a girl with a good imagination.”

The usual gleeful shrieks at last week’s Winnipeg Shrine Circus turned fearful as 6,000 big top fans watched Marie the baby elephant panic. When the blanket she was wearing slipped between her legs, trainer Wayne (Bigman) Piltz was knocked down as he attempted to disentangle the animal. For his efforts, he was stepped on several times, sustaining minor injuries. “It was a freak accident. They hate to step on people,” explained clown Toby Ballantyne, who watched from fourmetre stilts. Circus manager Reggie Armor has assured the public the elephant is friendly and gentle, but afraid of tripping. Blaming Marie would be wrong, he said, because “then they come down and want to shoot your elephants.”

After 14 years of publishing the praised but not always profitable likes of George Ryga and Michel Tremblay, Vancouver’s Talonbooks finally has a full-course success in Susan Mendelson’s Mama Never Cooked Like This. With 22,000 copies of the cookbook sold, Mama is now going into third printing while caterer-broadcaster-chef Mendelson, 29, finishes off her next work—a cookbook for kids. Explaining the maternal-title of her current success Mendelson admits, “Mother Roz can open a terrific can of corn Niblets and convinced me at a very early age that the biggest treat in life is a TV dinner.”

The guest list was impressive enough—counting members of the imperial family and ambassadors from Spain and France. Only the master himself was missing. In his place, daughter Maia Picasso this month officially opened Picasso Ceramic, a major exhibition in Tokyo of 186 never-before-seen works. There had been Picassos on display in Japan before, but these are in Japan to stay. For the second time in a year, Tokyo art dealer Susumu Yamamoto had negotiated a multimilliondollar Picasso purchase. Both Ma'ia and the Japanese media consortium behind the deal are smiling: she because her share of Picasso’s private collection has brought in needed capital; they because the price can only go up. The Japanese public, too, is smiling. For the next three years, the exhibition will tour the country before taking up permanent residence in a museum close to Tokyo. The ’70s may have been the years of the grape, but now that the wine markets of the world have been cornered by the Japanese future bets are being hedged on the art market.

After holidaying in Europe, former Charlie’s Angel Jaclyn Smith has begun primping for a role that promises to figure prominently in next season’s TV ratings war. She will play the title role in a three-hour made-for-TV movie titled Jacqueline Bouvier Kennedy covering the life of the former first lady from early life to the fateful trip she and husband John Kennedy took to Dallas in 1963. Jacqueline Bouvier Kennedy Onassis has declined participation in the film, though her office supplied some research, and the producers plan to concentrate on her life with her family and as a photographer in Washington. Viewers will be treated to 75 costume changes, and plenty of sailing sequences with Seattle as Hyannis Port and the tanned face of James Franciscus as J.F.K. Under consideration for similar treatment is the life of Margaret Trudeau, but the next bio-pic will be the Maria Callas story.

This year’s tonic for the troops is top Canadian model S.J. Fellowes, who joins the Canadian Armed Forces entertainment extravaganza Showtime ’81 next month for a tour through Germany, Cyprus, Syria, Damascus and the Golan Heights for 25,000 Canadian and UN troops. Producer Andy Body has taken five Miss Canadas on such tours, but he decided to ask Fellowes along this year instead, following her success as the cover girl of the October issue of Playboy when she bared buttock and bosom while wearing an RCMP jacket and riding boots. Her part of the show includes talking about herself, explaining how the Mounties always get their man, then joining six gorgeous dancers in red and white sequins who will sing “Give me some men who are stouthearted men!” Fellowes is philosophical about her work: “I’m not going to take on all the problems those guys have being in the army,” she says. “I’m just going to relieve them.”

As he ended the first week of a 90day starvation diet last Friday to protest the federal government’s proposed charter of rights, Winnipeg antiabortionist Joe Borowski still had plenty of energy to attack the “charter of death” and its creator, Pierre Trudeau. Borowski, a minister of transportation in former premier Ed Schreyer’s cabinet, now runs a health food store and has vowed to stick to a diet of herbal tea and lemonade, come what may. “I expect to work for a month until my body has cannibalized any fat, then I’ll have to slow down,” he says. He believes the charter of rights will pave the way for abortion on demand. Borowski, who is being joined in the fast by wife, Jean, and daughter Sandra, 21, for the first three weeks, says he will stop short of suicide “since that’s against the faith.” 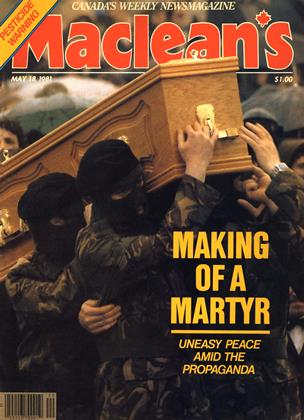