Although today’s computers can produce symphonic sound, they are unlikely ever to approach the bigband swing directed by Bill (Count) Basie. Since the mid-’30s, when the Basie orchestra roared out of Kansas City, the road has been home for the pianist and his 19-piece band. Recently, Basie has been suffering from arthritis and heart trouble, which have forced him to travel around the stage in a golf cart complete with a horn he uses to greet the audience. At 76, Basie is reluctant to retire from his position as jazz’s bestloved big-band leader but is spending more time at his Bahamas retreat where he is working on his memoirs. According to Basie, his life story will deal “damn straight” with such subjects as racism and early record company ripoffs. However, he plans to maintain a jocular tone in the title: “I don’t know, maybe I’ll call it simply CB."

Where else could you watch a steady stream of Mercedes being valet-parked, a uniformed Mountie on duty and live surfing but at a beach party of self-exiled Canadians from the Los Angeles film industry? The surfers were for real; the Mountie strictly central casting, on hand to dispense Canadian flag pins at Norman and Dixie Jewison’s second annual “Canadian party.” The bash was held last week just before the Jewisons traded their ocean view for summer at their farm near Caledon East,Ont. About 60 green-card-carrying Canucks dropped by director-producer Jewison’s Malibu house to reminisce by telling old CBC stories. Actors Michael Sarrazin, Helen Shaver and John Vernon, comedian Rich Little, producers Stan Daniels and John Kemeny and Canadian Consul General Jim Nutt were among those who peppered the laid-back California air with Charlie Farquharson-accented “ehs” and “oots” and displayed that unmistakably Canadian characteristic, hockey madness.

The Canadian Broadcasting Corporation has never been known for its fast-paced decision making, but last week’s changes made up for years of lumbering. First, Barbara Frum announced that she had ended 10 years at CBC radio’s As It Happens with a move to a host spot at The Journal, the nightly current affairs TV show airing this September (see story, page 19). In her wake, the radio current affairs department will face a massive reorganization with As It Happens and Sunday Morning operations being combined in one office under former As It Happens executive producer Robert Campbell. With the resignation of Sunday Morning's husband-and-wife co-hosts Bronwyn Drainie and Patrick Martin, and

Frum gone, three top on-air positions are open. There were almost four, but Morningside's host, Don Harron, who threatened to quit last month, has apparently been placated by the replacement of the show’s executive producer, Gary Michael Dault.

U.S. Consul General Michael Carpenter has had his share of cold weather during his three-year stint in Manitoba, Saskatchewan and northwestern Ontario. So it seemed appropriate to roast him at a surprise goingaway party in Winnipeg last week, organized by Manitoba Business magazine publishers David Richardson and Richard Murray. Carpenter will be spending a year at Princeton University in New Jersey for what Regina lawyer Tony Merchant called a “retooling and a course in Reaganomics,” adding that Carpenter had “everything needed to get to the top, including a photograph of Ronald Reagan wearing lacy panty hose.” The popular consul must have done something to improve the Winnipeg posting. When he applied for “the coldest [job] on the American diplomatic circuit,” he only had to contend with “a handful” of other applicants. His successor, Lillian Peters Mullin, had to compete with 47.

Matilda may waltz on forever but Australia Fair will not run. The three-year-old thoroughbred filly, given to Queen Elizabeth as a silver jubilee gift by the Australian people last year, has proven to be a royal embarrassment. Since her dismal last-place finish at Lingfield, Surrey, last October, the hapless horse has been hidden by the Queen’s racing manager, Lord Porchester. “It’s very sad for the Australians,” said Porchester recently from the royal stables at Highclere, Hampshire, “but I am afraid the situation is that the animal has no ability and no prospects.” Instead of carrying Her Majesty’s colors this summer as planned, the horse faces deportation. Perhaps the not-so-fleet filly will serve as a reliable mount for Prince Charles on future royal visits to Australia.

In his latest book, Patton's Gap, Canadian author Richard Rohmer presents an admiring portrait of controversial U.S. Gen. George Patton, whom he personally describes as “an extremely emotional, ebullient, charismatic” leader. Nevertheless, Rohmer says he is more interested in writing about the global “chess game” than “representing any particular body of characters.” Patton's Gap—an autobiographical account of the Falaise Gap engagement—is set against the backdrop of Canada’s worldwide collaboration in the Second World War. Explains Rohmer: “It’s imperative for Canadians to understand that we’re part of an international community. We’ve just about reached the limit with the number of bricks we can put up along the 49th parallel.” music during an eight-city tour. Dufort and cohorts Kim McAuliffe, Kelly Johnson and Enid Williams think women should be playing the music that has deafened Ted Nugent. Girlschool turned down a management offer from former British prime minister Harold Macmillan’s daughter Rachael, because of her inexperience in the ways of the street. “Kids faint and get crushed at our concerts sometimes,” explains Dufort.

Head-bangers are kids who listen to heavy metal music. At a concert, they all jump about shaking their heads as though they want to crack their skulls open,” says Denise Dufort, 23, who has experienced the head banging phenomenon in England as the drummer for Girlschool, an all-female heavy metal quartet. This month, sister head-bangers from Montreal to Vancouver will have a chance to crack their craniums to Girlschool’s sledgehammer

At 51, Yvon Durelle looks like a man of 70. The former British Empire light heavyweight champion’s eyelids are puffed so badly from his 16 years in the ring that he has finally decided to have corrective surgery this fall. Another thing he has decided to do is to go to Fredericton from his home in Baie Ste Anne, N.B., and ask Premier Richard Hatfield to find him a job coaching boxing. “I like to work,” says the fighter turned forest ranger then beer salesman who is fed up with his present life as a fisherman. “My boat’s been in the water for 1V2 months,” he says, “and I haven’t made a dime. I’ve done so much for my country and I am the only guy who can get Hatfield and the Opposition leader together for a picture.” With “nothing to do and lots to say,” Durelle told his life story recently in The Fighting Fisherman, but chuckles: “There’s some truth in the book but it’s only a part what you heard. I had some fun; I couldn’t tell the whole truth.”

After six years of agonizing over a nagging pain in her neck and back, journalist Judylaine Fine decided to lobby for better back treatment and preventive care. With three prominent sufferers—Barney Danson, former minister of defence, Betty Oliphant, artistic director of the National Ballet School, and orthopedic surgeon Hamilton Hall, Fine set up the Back Association of Canada (BAC) to help 16 million Canadians who are aching without representation. “People are always saying that back pain is in our heads,” says Fine. “The fact is that badly designed theatre seats and restaurant chairs leave us fidgeting.” Some 400 BAC backers plan to blanket Canadian schools with information on back care, and research a booklet on furniture design promoting hard chair seats and firm mattresses.

William Shakespeare’s infamous Shylock, the Jewish moneylender in The Merchant of Venice, and Fagin, the wily old Jew in Charles Dickens’ Oliver Twist, are at the centre of a controversy that has Ottawa’s Carleton Board of Education and a group of concerned citizens at odds. The board is examining The Merchant, which is currently on the curriculum for Grade 9 students, and Oliver for what the group charges is anti-Semitic content. Aviva Freedman, a Carleton University English professor, told the board, “Some kids at the Grade 9 level can’t hear beyond stereotypes, and for the Jewish children in the classroom it can be a very painful experience.” Harry Corrin, a representative of the secondary school English teachers, feels the issue is mainly emotional. “We respected the people who presented their concerns,” says Corrin, “but we don’t think that they know what’s going on. We are standing by our courses.” The matter should be resolved later this month when the board either accepts Freedman’s proposal that the classics be taught at a more senior level or decides that the flap was much ado about nothing. 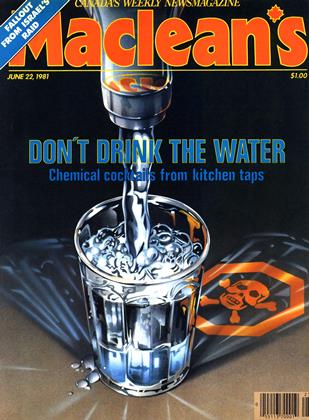