A car moving at high speed careers off a bridge into a river and begins filling up with water with actress Nancy Allen trapped inside. So begin the thrills in horror maestro Brian De Palma’s latest film, Blow Out, due for release next week, co-starring John Travolta as a sound man turned sleuth. “The problem with that scene was that I’m terribly claustrophobic,” admits the 31-year-old Allen who, nonetheless, crawled into a car in a huge water tank under husband De Palma’s careful direction to film the escape close-up. “Brian tried to talk me out of doing the scene, but I’m also stubborn,” says Allen. “Besides, I thought maybe doing it would help me overcome my fears. It didn’t.”

The Oxford Guide to Oxford, the most recent addition to the wellrespected and widely used series of local guidebooks published by Oxford University Press, has been banished from the shelves of Oxford’s best-known English bookseller, Blackwell’s. Written by University of Toronto Professor Peter Heyworth, the guide features a few tongue-in-cheek suggestions for sightseers (e.g. The High Street: “It must be seen and it is best seen walking briskly from Carfax toward Magdalen”). While the slight eccentricity was permissible, Heyworth’s references to Blackwell’s office building, “sinister glass and concrete,” and its commercialism, “some of the inexpressible values of bookselling have been lost in the worldly ethos of management operation,” did not amuse the management, which deemed them “silly, snide and unsubstantiated.”

The Wedding March may be the only tune dancing in Lady Diana Spencer’s head these days, but she is serving as inspiration for much other music. Montreal entrepreneur Don Wayne recently hauled local singer-turned-Hollywood-score-writer Allan Nicholls into a recording studio under the name of Captain Aztec to do a reggae update of Paul Anka’s old hit Diana. “Only this time the lyrics say ‘Please stay by me, Lady Diana,’ ” says Wayne, who is waiting for final permission for the lyric changes from Anka’s agents. If that project falls through, there’s also Paul McCartney’s brother, Mike, who has recorded an original song called No Lardi Da Lady Di. Sings McCartney: She's just like the girl next door/You never get to meet/'Cause you're always behind on your rent/And her father owns the street. The album sleeve features two sets of underwear marked HERS and HRH’s hanging on a clothesline.

West Vancouver restaurateur and self-confessed “publicity hound” Frank Baker, 58, has decided to sell a used car once driven by Sean Connery in Goldfinger and lusted after by an Arab sheik who couldn’t buy it five years ago because it simply “wasn’t for sale.” The car, encased in glass outside Baker’s eatery since 1969, is the grey

Aston Martin DB5 James Bond used to wipe out Odd Job and a slew of other Ian Fleming baddies in the 1964 movie. With a Vantage 325 b.h.p. aluminum cast motor, twin overhead cams and triple carbs, it was clocked at 265 km/h on its journey to Vancouver 12 years ago. The $200,000 asking price included smoke screen emitter, oil-ejecting taillights with retractable metal spikes, a radar screen and triple revolving licence plates. To prospective buyers, who have been calling from as far away as Los Angeles, Calif., Baker is honest about the car’s failings: the .30-calibre machine-guns in the parking lights do not fire any more and the ejection seat never did work—“It was phonied up for the movie.”

Montreal esthetician Pia Damtsis’ Bibicure System, recently picked up for national distribution by Yardley of Canada, is, according to its inventor, $77.75 worth of prevention. Damtsis spent eight years researching the breast toner, eye soother, chin strap and foot kits which are money-back-guaranteed to firm up sagging flesh. The rubber breast toner, which she recommends refrigerating, then slipping into one’s brassiere, helps all sizes from “two little hanging things” up. An esthetician for 17 years before she went into small-scale production of the kits in the spring of 1980, Damtsis warns: “Women should not wait until they are 30 or 40 to start taking care. Some of my customers have said, ‘When my breasts sag, I’ll have an operation; so what?’ They should see the scars.”

Micheline Massé was collecting old stock certificates to use as wallpaper in her Montreal home in 1963 when she came across one that turned out to be worth $5,000. Now the ener-

getic 42-year-old mother of three runs Stock Market Information Service Inc., a search company that has turned up $1 million for clients who thought they held worthless stock. For a $30 fee, Massé will investigate the stock’s history and notify the company, whose name may have changed several times, of its outstanding—and often unwelcome-debt. In 12 years of “feeling like a detective,” Massé’s coup de grace was netting $52,022 for 1,000 shares in the North European Oil Co. held by a Florida man who bought them in 1937 for 25 cents apiece. Massé’s current endeavor is the founding of the Canadian chapter of the Bond and Share Society, an organization of collectors of old bonds and certificates, which will hold its inaugural meeting this week in Toronto.

he hardest thing about making a film about my life was the bad memories it brought back,” says Garry Borris, 30, the star of the critically acclaimed Canadian feature film Alligator Shoes, written and directed by older brother Clay. In the story of his Acadian family who moved to a Cabbagetown

slum in Toronto, Borris had to re-enact the still painful experience of discovering his aunt’s body hanging from a tree seven years ago. But his first major role wasn’t a complete downer for the self-styled wheeler-dealer: “I think I drank about a dozen Labatt’s Blue every day during the five weeks of filming.” Having also acted in three of his brother’s short films, Garry now plans to strike out on his own. “Once I prove myself, hopefully we can work together again,” he says.

When film distributors label a picture a “stinker,” they are usually referring to its financial prospects. Polyester, the latest release from U.S. cult director John Waters, literally

stinks. Due to open across Canada this month, one of the surprise hits of the Cannes Film Festival was produced using Odorama, an updating of the wafting-across-the-tfieatre ’60s experiment, smell-o-vision. Waters, whose Pink Flamingoes and Female Trouble are staples of the midnight movie circuit, describes the film as “a ludicrous melodrama, like Father Knows Best gone totally berserk.” Starring the 310lb. transvestite Divine, Polyester marks the comeback of ’50s heartthrob Tab Hunter, who was last seen in Mary Hartman’s TV kitchen. A reflective 50, Hunter said recently: “Of all my leading ladies . . . Lana Turner, Rita Hayworth, Sophia Loren ... Divine has more on the ball than any I’ve ever worked with. He’s like Annette Funicello gone bananas in a pasta factory.”

In the middle of a hectic whirl of scheduled public appearances Princess Margaret, 50, took time out last week to visit the Toronto hospital named after her in 1958 and have tea with one of the Canadian Cancer Society’s founders, Ruth Frankel. After presenting the Princess with a maple leaf Volunteer Pin marking more than 20 years of service to the hospital, Frankel suggested Margaret return for her 25th-year pin in 1983. “I wouldn’t miss it. Didn’t we have fun in ’67 at the ball?” she said, referring to her last Toronto trip with then husband, Lord Snowdon. Margaret was accompanied in the weeklong visit by her 17-year-old daughter, Lady Sarah Armstrong-Jones. Her 19year-old son, David, Viscount Linley, doesn’t need his mother to go abroad. “My son can come to Canada on his own,” she said. “He’s quite old enough, you know.”

As usual, Pierre Trudeau’s aides were mum about their man’s social plans for a free night in Washington last week. The PM did tell Canadian

Press photographer Peter Bregg that he would be staying in at Blair House, the fashionable VIP digs across Pennsylvania Avenue from the White House. According to a Canadian Press stakeout, Trudeau set aside his briefing papers for a soiree with Washington socialite Lacey Neuhaus, whom he dated in New York in April. During a photo session in the Oval Office the next day, with Ronald Reagan looking befuddled and Bregg snapping shots, Trudeau inquired, “What did you do last night, Peter?” Replied Bregg between bursts of the motor drive: “I stayed home by myself, sir.” Trudeau: “So you didn’t get me, eh?” Turning to Reagan, the PM explained: “I gave him my word that I wouldn’t go out last night. But he doesn’t know what happened in there.” -EDITED BY BARBARA MATTHEWS 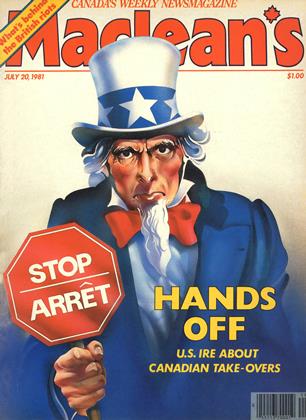