The smell of money no longer hangs over Port Alberni. Here, on Vancouver Island, as at Prince George in the Interior where the late W.A.C. Bennett made his famous remark about the stink from pulp mills being the smell of money, the air was sweet and clear last week. That is one of the few pleasurable byproducts of a strike that has shut down the forest industry, British Columbia’s leading money-maker, for more than a month. As the talks between the companies and the three unions involved were scheduled to start again in Vancouver this

week, it was in such places as Port Alberni, dependent on the wealth in the woods around it, that the negotiations would be most closely watched.

MacMillan Bloedel’s corporate headquarters in Vancouver is in a grey concrete building that looks vaguely like an egg crate standing on one end. It is a downtown landmark in Vancouver, but the company’s presence is mightier in Port Alberni. MacBlo’s huge pulp and paper plant is just down the hill from Third Avenue, the decaying business core that looks stuck in a 1940s time warp with its small stores and onestorey buildings. Here the merchants look out at the empty, angled parking spaces and wonder how long the strike will continue. The street itself and other city roads may get bumpier if the strike lasts for a while as the gravel pit used for road building lies behind the picket lines on company property.

There are 30,000 people living in and around Port Alberni and 5,700 of them work at MacMillan Bloedel. It is the biggest game in town and most of the businesses need some of the company’s $157-million payroll or the $42 million it spends on goods and services each year. They got some in mid-July when the workers traded chain saws for picket signs and went on a spending spree with four weeks’ vacation pay. “We had a real rush on lumber, plywood and paint for about a week after the strike began,” said AÍ Souther, the manager of a building supply store. “It’s a good time for someone to fix up his house.” But Souther doesn’t expect the boom to continue. “It’s borrowed business,” he said. “We’re getting now what we would normally get in September through November.” Boating stores are also doing well as many of the strikers have decided to go fishing for a while during the hot days of August. It is the businesses that supply goods that people can do without for a while that are hurting. “It definitely has affected

us,” said Lois Macintosh, a clerk in a florist’s store. “If it continues for long we’re all going to get laid off.” Around the corner at Compton’s Jewelry, the big excitement of the afternoon was a woman coming in to check on some rings she had left to be cleaned. Nearby, in his city hall office, Mayor Jim Robertson was worrying about the effects of a long strike on young workers with large mortgage payments—even if the banks are being understanding right now about slow payments. “There seems to be a feeling in the community this time that it could last for a while and that would really slow us down,” he said.

At the bottom of the hill, on the Canadian Paperworkers’ picket line outside the MacBlo plant, Perry Shepard was working on his tan and trying to adjust to strike pay of $100 a week. As a paperworker he had been making slightly more than the base rate of $9.96 an hour, but he doesn’t think he will have gained even if a company offer that would pay him around $31,000 a year in the second year of a settled contract is improved. “I’ve already lost $1,800 in the month we’ve been off work. We’ll be going back to work for what amounts to 1980 wages,” he said. “My house payments are fine until September, but I don’t know what I’ll do after that. I’ve been living from pay to pay and I’m getting sick of living in a oneindustry town where there is nothing to fall back on if you don’t have a job at MB.” He sat there for a while, listening to the talk around him from other strikers about the jobs available in Alberta as if he were considering a move to Calgary.

On the line, in the rundown business section and in city hall, everyone likes the clean air and fishing spots that aren’t clouded by pulp mill effluent. But they would like to have the smell of money back. —MALCOLM GRAY 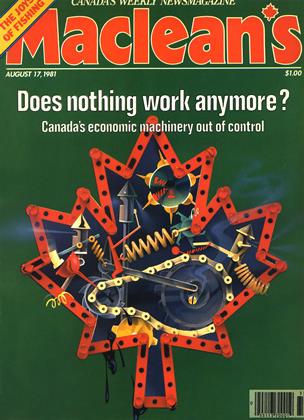