About 30 years ago a 19-year-old red-head bravadoed her way into the office of Broadway producer Theron Bamberger, begging for the classic big break as an actress. “You know that you’ll never be an ingenue,” said Bamberger, after perusing the petite (five-foot, three-inch) sharp-faced female . She was sent on her way, and instructed to return the following week with her red hair drawn back, wearing the black dress of a “character actress.” But she never went back.

“I just couldn’t handle a life that depended on other people’s desires. I had to be in control,” confesses a nowblonde Lynne Gordon. Instead of taking the offer, she became an advertising account executive which, in a process she describes as “spiralling,” led her to broadcasting, consumerism, feminism and writing. For the past three decades, Gordon has fought passionately, some would say stridently, for control over her life. Having achieved it, she is ready to indulge in “something I always had a hunger to do . . . acting.”

Next month, Gordon makes her Canadian acting debut as Anna Ciccone—a baker’s wife and protective mother to Louis Del Grande’s psychic reporter in the new CBC TV three-part mini-series Seeing Things. It’s a small part and terribly traditional for the chairperson of the Ontario Status of Women Council, but Gordon fails to find any compromise: “Maybe as we go along I’ll get them to throw in a few little women’s awareness touches.”

Women’s awareness. Networking. Dialoguing. Lynne Gordon’s conversation is laden with pop psychology jargon. Her enthusiasms, from broadcasting in the ’50s through to feminism in the ’70s, have caught trends as surely as a Gallup poll. Yet few who know Gordon question her warmth or sincerity. “I respect Lynne for her fighting instincts and her strong beliefs about womens’ rights,” says her close friend, Dr. Cyn-

thia Carver. “Also I respect her because life hasn’t always been kind to Lynne— but she has been kind.”

Carver is one of a comforting circle of female friends who closed around Gordon when her companion of 11 years, advertising executive Steve Evans, died suddenly of lung cancer a year ago. She was made vulnerable by the loss and for the first time in her life she cried in public. “I bought this house with my own money,” she says of her fashion-

Lynne has always had to push a bit because of her background. That has stood her in great stead. ’

able Toronto townhouse padded with plush beige carpeting and hung with Inuit art. “I paid for it and yet the first thing I thought after Steve’s death was ‘Oh no, who’s going to take care of me?’ ”

In fact, Lynne Gordon has always taken care of herself. Like the feminist heroine of a made-for-TV movie, she has raised three children, weathered three divorces, survived half a dozen careers and as many last names. She came to Canada in 1967 with her third husband, an academic psychologist. In Kitchener,

Ont., she worked for CHYM radio, which supplied its employee, born Lynne Levinson to Jewish parents in Manhattan, with a pseudo-Canadian heritage. “The people at CHYM said my married name [Castaneda] was too poetic or something. So they went to the phone book and came up with Gordon,” she laughs. “They told me it would be perfect because it has a Scottish origin and everyone here loves the Scots.”

A year later, her third marriage in

ruins, she took her children and her new name to Toronto. She made her name by creating the Consumer Desk for CKEY radio in 1972. At a time when most people believed in consumer salvation through the Better Business Bureau, she was providing well-researched and entertaining advice on everything from buying a pet to shopping for a doctor. She even went undercover with an RCMP officer to investigate pyramid sales schemes. In 1975 McClelland and Stewart published Gordon’s first consumer book, the best-selling Consumer's Handbook. With the sure instinct for self-promotion that, in her native New York, might be applauded as chutzpah but, in Toronto, is sometimes derided as pushiness, she began appearing on booksellers’ doorsteps this spring to make ¡sure that her latest consumer I book is properly displayed on ; their shelves. Says Gordon: ¡“I’m a merchandiser. I’m a marketer. I can’t help it if I want to use it all.”

Like a radio announcer terrified of dead air space, Gordon talks incessantly, her voice insistent, effusive and unmistakably New York. The ego runs full blast. “They were absolutely flipped over it.... They loved it.... They said I was wonderful,” she reports of reactions to her CBC performance. Quips a foe from early feminist battles: “If you’ve met her, you’ve heard the 300 most wonderful things about Lynne Gordon.” But beneath the self-confidence and drive is nagging insecurity. Says her publisher, Jack McClelland: “Lynne has always had to push a bit because of her background.

That has stood her in great stead over the years.”

Independence was learned early. Gordon’s parents were divorced and,at the age of 9, she and her sister were sent from a comfortable home in Manhattan to board for four years with a housekeeper in a rough neighborhood in Brooklyn. Taunted and even beaten because she was Jewish and without a normal home, she learned to fight back. She saw boys with paper routes so she got one. But above all, she enjoyed retreating to the bay-windowed library of the Brooklyn Children’s Museum where she read, dreamed and wrote poetry: “I escaped into a world of make believe.”

When her mother remarried, she reclaimed her daughters and Lynne Levinson became Lynne Smith. Her stepfather didn’t approve of higher education for women, so she took a job as an advertising account executive and put herself through Columbia University at night, studying journalism, drama and advertising: “My father said a good wife stayed home and made a good hot meal at six o’clock. Well I don’t eat at six. I don’t like hot meals. And what’s wrong with tuna fish?”

Her first marriage to a college sweetheart ended after a few years when she realized that she needed “someone with more motivation.” Her second marriage, to radio personality John Henry

Faulk, gave her three children and the motivational experience of her life. The couple had a fashionable apartment in Manhattan, a full-time housekeeper (Gordon is proud of the fact that she has never learned to vacuum) and a supportive group of friends in the local performers’ union, including Myrna Loy, Walter Cronkite and David Susskind. It was through Faulk’s involvement in anti-blacklisting union activities that Gordon’s good times went bad. Though the McCarthy witch hunts had been terminated in 1954, anti-Communist vigilantism was alive and well in the media. Faulk was fingered by a fringe group of self-appointed subversive seekers, who called themselves AWARE Inc. He lost his lucrative job with the CBS network and found it impossible to get work. Backed by Gordon and others, Faulk hired lawyer Louis Nizer and launched a lawsuit. Gordon found herself blacklisted by association. She couldn’t even work behind the scenes as an organizerresearcher for the TV show Name That Tune. “As we were getting ready to sign contracts, one of the men made a call,” she recalls. Apparently that call was a standard AWARE check. “He came back and said there wasn’t a job. And he was just white. I looked at him and said ‘My maiden name is Smith. You don’t have to use Faulk.’ He just said he was sorry, very sorry.”

In 1958, the family moved to Faulk’s home town, Austin, Tex., while he awaited trial. Gordon supported the family by establishing an advertising and public relations firm and publishing a monthly magazine, Austin on the Go. In 1961, Faulk was awarded $3.5 million in damages. But two years later, when he collected the money, he walked out on Gordon and took the cheque.

The episode returned to haunt her in 1975, when CBS-TV aired John Henry Faulk’s story, Fear on Trial. By then, Gordon had hit her stride personally and professionally, but none of her friends or associates knew her whole story. “Without thinking, and out of very deep pain, I had shut out part of my life,” she confesses. “I was at last thinking that finally I could tell people about a part of my life that I’m very proud of.” For her coming out, Gordon orchestrated a catered affair at the Park Plaza Hotel for 30 of her friends who huddled around the tube. Twenty minutes into the show, Gordon went into shock. The trial was portrayed with painstaking accuracy, but her role had been distorted into that of an unsupportive woman who supposedly walked out on her husband as soon as the going got tough. It was Gordon’s turn to sue, and in 1977 CBS settled out of court for “a considerable sum.” (“If I had known

they were going to show it so often I would have held out for the whole $1.5 million,” she snarls.)

Though the settlement added to her already solid financial base (Gordon refuses to disclose her age or income), she thrives, as ever, on juggling several careers. When she was approached by the Ontario government to serve as chairperson of the Status of Women Council five years ago, however, she hesitated. She had already been named Woman of

the Year by the Ontario government for her community work and “what sounds like a prestige job to some, just sounded liked a lot of work to me.” But the council was in shambles, its previous head , Laura Sabia, having quit with the recommendation that it be disbanded, and Gordon needs to be needed.

The appointment, however, caused resentment in feminist ranks. As Ann Pappert, former chairperson of Toronto’s Municipal Task Force on Women,

puts it, “Feminists thought she was a disastrously poor choice because she’d never been involved with feminist issues.” Retorts Gordon’s friend, writer June Callwood: “It was nothing but bigotry against well-dressed women. It was also a generational thing. Lynne’s warm social style may have been seen as insincere by feminists who have a more austere image.”

Laura Sabia still calls the council “window dressing for government.” But Gordon points with pride to the positive consequences of the council’s work, such as Ontario’s revolutionary Family Law Reform Act. As for her image, “If lipstick makes me happier—it’s okay,” concludes Gordon. “I know the issues. I stand up for them. Nobody is going to tell me what to wear or how to look, after what I’ve been through.”

Next year Gordon’s second term as chairperson ends and she will have to step down. In the meantime, she juggles her schedule to combine her duties with a daily radio show on the all-news station CKO, her lectures on consumerism and feminism, her writing, consulting, travel and now acting. She is writing her autobiography, due out next spring, to set the record straight once and for all. In good humor once again, she’s thinking of calling it Living Without a Net. “I’m still a tough fighter,” she smiles, “but I’m softer.” 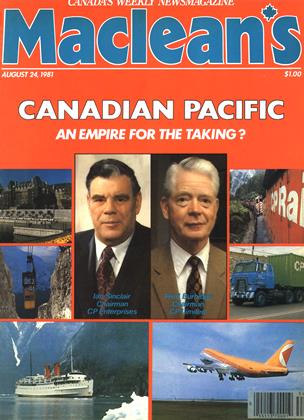