As a teen-ager, Toronto stockbroker David Deacon wanted to be a politician like his father, former Liberal MPP and onetime Ontario party leadership hopeful, Donald Deacon. But his love for speed led him to the hunt field, then to racing motorcycles and a severe crash, which left him hospitalized for six months in 1972. To assuage his parents’ fear of two-wheeled vehicles, Deacon took up auto racing. Now, at 32, he puts his BMW Ml through the courses of Le Mans, Daytona and Mosport at speeds of 200 m.p.h. not because of some inherent death wish but because of the “transcendental quality” and the demand for “110-per-cent concentration, like playing chess at 100 m.p.h.” The first Canadian to be offered a European factory ride in the 24 Hours of Le Mans this summer, Deacon has raised $160,000 this year in sponsorships and plans to drive until the risks “become larger than my enjoyment.” Then? “There are very few occupations as demanding as politics.”

European armed forces annually head for the vast reaches of the Canadian Prairies to play their war games, but this fall Canada’s own armed forces will be playing a more mundane game of finding the needle in the haystack. Up to 100 soldiers at a time, marching shoulder to shoulder with their eyes fixed firmly on the ground, will spend a month combing 11,400 acres of Sarcee Indian reserve land near Calgary, looking for the potentially lethal debris left from the 73 years the army has leased the land for manoeuvres. Maj. Jim O’Brien, Canadian Forces Base Calgary administration officer, seems convinced that the search will find most everything that “might go boom in the night,” but the Sarcee have been viewing the operation with understandable alarm. Admits O’Brien: “There’s no way anyone can give assurances that [the land] will be 100-per-cent free of unexploded munitions.”

Asking her Valentino to find her a vino may have made Spumante Bambino girl Sherry Miller a household face, but it has done little to make her a show biz name. “No one seemed to think I could hold an audience for longer than 30 seconds,” sighs the 26-year-old from Ponoka, Alta., who is proving them wrong this month in a Toronto theatre production of The Only Game in Town. A couple of TV guest spots and a nightclub act in the works with her husband, champion figure skater-turned-realtorproducer Val Bezie, means things are coming together for Miller. “But even

after giving a performance I’m proud of, I still get stopped by people in the audience who say, T love you in that commercial,’ ” she moans.

To rev up sales of his first album, an anthology of favorites marking the 25th anniversary of his popular CBC radio show, Gilmour’s Albums, ex-film critic and columnist Clyde Gilmour had his first record-signing last week in Toronto. “In an hour I autographed 100 albums. That’s one a minute,” says the otherwise precise 69-year-old who wears two wristwatches “for a second opinion.” Once notorious for his preoc-

cupation with women’s legs—“the most beautiful” was a category in his yearly roundup of movie bests and worsts before the days of “rampant feminism”— Gilmour needs no second opinions about “the glorious” limbs of Cyd Charisse and maintains that Mitzi Gaynor looks better now than she did in her 20s, especially “onstage in a bikini.” As for the latest Bond sensation, Joyce Bartle, Gilmour says: “I like more meat on the bones. I’ll bet she looks like a Vogue model—her cheeks all sucked in—her facial cheeks, I mean.”

Until self-styled professional prophet Ray Cormier, a 37-year-old ex-salesman from Ottawa, arrived in Whitehorse last week, nobody had ever imagined that the city had been named for anything other than a resemblance between its now-submerged rapids and a flowing silver mane. But Cormier opened the Bible’s Book of Revelation and deemed its white horse a symbol of a challenger on the horizon—Canada, soon to be savior of the world and antidote to the dreaded Armageddon between East and West. Canada should cancel its $4-billion-plus order for American fighter planes, Cormier decreed, and use the dough to build solarpowered greenhouses across the land — toward the day when acid rain finishes off the last morsel of birch bark. There’s not much profit in the prophet biz these days, which is why Cormier, unbiblically clad in jeans and a No. 13 football jersey, has spent the past 6V2 years with his hand out. He has also spent some time in jail for public preaching and was once forcibly re-

moved from the House of Commons. But if he needs sustenance, Cormier recalls another biblical injunction: “If when he seeth the sword come upon the land, he blow the trumpet and warn the people.”

Fans across the country inevitably link the dedication on Christopher Ward’s latest chart-climbing album, Time Stands Still, to the photo of the raven-haired beauty on the j acket front. But the 32-year-old Ward has even less subtle ways of promoting live-in love Alannah Myles’s fledgling music career. First he booked her as his warm-up act on a 1980 tour of the Maritimes and now

he is collaborating on her demo videotape. “Christopher takes my young and earnest song ideas and gives them commercial life by cutting right through to the heart of the music and lyrics,” explains the 25-year-old Myles. Leaving her behind to peddle the demo while he promotes his “Leonard Cohen meets AC/DC” sound on a Western Canada tour this fall doesn’t bother Ward: “Before we ever met, Alannah was throwing the PA in the backseat of the car and going off to play in small-town bars. A woman travelling alone, playing for a bunch of drunks, has got to be a survivor.”

cowboy from Fort Worth drawls, “Sometimes I wonder, what in the world am I doing here?” What he’s doing in his two events—he also wrestles steers—is making a possible purse of $4,000 a week in such rodeos as the Stetson World’s Toughest Rodeo, due into Toronto’s Canadian National Exhibition next month. Injured badly several years ago in a “freak accident”—a horse fell over backward on top of him—Williams will be competing with a sore knee, which was twisted when “a steer kept on goin’; that’s real common.” The injuries, plus the 11 months a year spent away from his police investigator wife, may force his retirement soon. But

From the moment External Affairs Minister Mark MacGuigan arrived in Peking last week, he was moving a little too fast. Borne by a tailwind, his jetliner landed ahead of schedule, giving Chinese Vice-Foreign Minister Zhang Wenjin barely enough time to straighten out his tunic before MacGuigan was shaking his hand. “You’re early,” remarked a slightly embarrassed Zhang. “Sorry about that,” replied MacGuigan. When the bottom of an airport escalator became the impromptu locale for MacGuigan’s formal welcome, a reporter asked about the sale of arms. MacGuigan blurted out that Canada was prepared to sell “strategic goods” to China. That comment stirred an instant ripple of negative reaction at home and apparently even surprised

Primed by that porcine femme fatale, Miss Piggy, North American hog fanciers may look forward with glee to next month’s definitive study of swine, Pigs: A Troughful of Pleasures, coauthored by Canadian literary agent Lucinda Vardey and writer Sarah Bowman. “We were fascinated by the wit of the pig, the originality of its body, the cast of its eyes,” explains the British-born Vardey, who has been collecting hog memorabilia and admiring the animals—from afar—for years. Although Troughful discusses everything piggy from nursery rhymes to author E. B. White’s classic, Death of a Pig, there is no mention of the redoubtable Miss P. BARBARA MATTHEWS 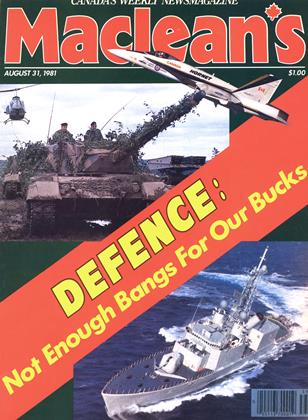