In a rare display of taste, the Academy of Motion Picture Arts and Sciences chose a Russian film called Moscow Does Not Believe in Tears as the 1981 Academy Award-winner for the best foreign language film. The film is first-rate. The moviemakers even resisted the ancient Russian impulse to stop the action every 10 minutes for two minutes of wholesome Russian singing. The editing and pacing, comfortable for North American audiences, is positively swift for Muscovites. One envisions earnest discussions in the cutting room: “Comrade editor, how did the people get from here to there? We never showed them walking.” “Comrade producer, audiences are very sophisticated 50 years after the revolution.

They will just assume it.”

The film consists of two parts. The first takes place in Moscow in the late ’50s, the second in the mid-’70s.

Basically, it is the story of three country girls who come to the city to better themselves through a combination of work, study and marriage. Of course, unless a social system is wholly millennial in nature—a fanatical society seeking the millennium through Islam, Calvinism or the military purity of Sparta—individuals in any society seek very much the same things and have very much the same vices and virtues. This is such a commonplace that it would not even be worth noting, had not the entire machinery of Soviet propaganda been maintaining the opposite for decades. Socialism was to bring about a new type of human being, free of the capitalistic “vices” of individual aggression, social ambitions and material desires. It’s beside the point that many of us thought that if this selfless, heroic, collectivized human ever came into being he would be a monumental pain in the neck. The point is that this new creature never made it off the blueprint. We didn’t need Fred Astaire to show Cyd Charisse’s Ninotchka some silk stockings in Paris to corrupt her. As Moscow Does Not Believe in Tears confirms, Cyd Charisse could stay in

Moscow and still long to mingle with the “best” people and wear the latest feather boa.

What makes this movie so completely different from previous Soviet films is that such people are regarded not as the enemy, or laggards whose consciousness is yet to be raised, but as perfectly normal human beings. Seekers of social status and designer clothes are offered words of conservative wisdom that might have come from a 19th-century grandmother. “I would have made such

a wonderful general’s wife,” says one of the social-climbing heroines enviously. “Well, you’d have to marry him as a lieutenant,” comes the reply. The movie is Stalin’s ethos turned into Queen Victoria’s—or at least an earlier peaceful America’s, of Main Street, U.S.A.

The film emphasizes a number of things that the Russians do, quite simply, better than we. Their high quality of acting is not without a moral component. Such extraordinary craftsmanship stems from understanding that self-fulfillment comes through the service of a craft. Similarly, keen as the Soviets may be on exporting such moral cul-de-sacs as extreme pacificism or feminism, they are more astute domestically. The Russians seem to understand that there is such a thing as sexual style and what is suitable for one sex is ludicrous when displayed by another. The one character portrayed with a degree of contempt is a stylish, attractive lady film director—ridiculed not because she exercises her authority, but

because she tries to do it in the way of a man. Similarly, however fond the Russians may be of sandal-wearing pacifists in Amsterdam, at home they understand that force rightfully employed has a place in the moral scheme of things. When the film’s hero dispatches a group of young hooligans almost in the tradition of John Wayne, he is admonished with, “Boys will think might is right.” “No,” comes the accurate reply, “only that might can be broken.”

Less engaging aspects of society Soviet-style remain unchanged. Marxism—which parades as an economic science—continues to reveal itself as a particularly inept system when it comes to the material betterment of its citizens. As the film reveals, the best sleeping arrangement a top executive in the mid-’70s can manage is a pullout couch in the living room. The rigidity of the Soviet class system is emphasized by the painful efforts of the heroine, who pretends to Ebe the daughter of a proIfessor in order to meet TV factors and hockey players. "The dinner party, at which every guest introduces himself by profession—“Vassily Gorkov, candidate in science” —is straight out of a Gogol story. No one, of course, could suggest that communism invented Russia’s fabled hierarchical consciousness, only that it has done nothing to eliminate it.

In the end, one leaves the movie musing uncomfortably on how Soviet society is getting to be more and more like ours, while ours, alas, in its increasing regimentation, its denial of human motivations and realities in the name of a spurious egalitarianism, is getting more and more like theirs. The Soviets seem, through bitter experience, to have learned many of the lessons we have yet to teach ourselves. They may be behind us in bedrooms-per-household and basic liberties, but where they are clearly ahead of us—and so demonstrate in this film with astonishing frankness—is in the understanding that perhaps it is not human nature that needs changing but the artificial systems that would suppress and deny it. 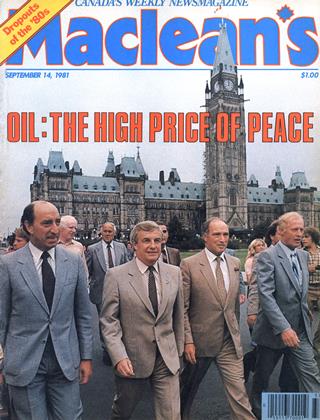