Gary Steiman and his family were basking at their summer cottage when thieves broke into their house in Winnipeg’s fashionable Niakwa Park district. But a piercing siren sent the would-be burglars scattering minutes before the arrival of local police who had been alerted automatically. The intruders tried a week too late: these homeowners had just installed an extensive computerized monitoring system which scans their premises every 70 seconds. “The system is worth its cost [$1,145 initially and $20 every month], not only in prevention, but in terms of peace of mind,” says Gary Steiman. “Times are hard, crime is spreading, and there’s a limit to what the police can do. Our neighbors have identical systems and if an alarm goes off, you know it’s not somebody announcing a cocktail party.”

Paranoia and pragmatism are now taking hold as thousands of Canadian renters and homeowners like Steiman batten down the hatches against a foaming wave of property theft. The product of leaping crime statistics, bitter experience and unnerving advertising by security retailers and manufacturers, security consciousness has generated $100 million in revenues for a bullish protection industry. Some wary residents are investing up to $3,000 on full surveillance, while the more budget-minded are spending $30 to $100 on heavy-duty locks.

Most disturbing to city dwellers are the statistics, which indicate it’s the growth of property crime that has most contributed to Canada’s rising crime rate—1980 saw a 27-per-cent rise in break-ins alone. At the same time, thieves’ preferences have shifted, says Staff Sgt. Bob McDonald of the Metropolitan Toronto Police Crime Prevention Bureau, from “electronics, radios, cassette decks and stereos. As the price of gold and jewelry went up, that started an upswing in that area.” And it seems that few neighborhoods have been spared. Crime charts indicate that east end Montreal and low-income areas of Toronto have been hit as hard as well-groomed districts.

ported and homegrown security devices. The FAST system (Fast Action Safety Team) was introduced in March by the Manitoba Telephone Systems in conjunction with Compu*Scan Security Inc., a private Winnipeg-based alarm company. Its intrusion and fire alerts rely on strategically located electronic sensing devices (including a pressuresensitive floor mat and an infrared scanner) connected to existing telephone lines. Any disturbance sends an electronic signal to the telephone company’s central computer, which reroutes the alarm to Compu»Scan’s computer (which stores personal information on each subscriber). Someone at Compu«Scan phones the homeowner; if there is no answer, the appropriate authorities are notified.

This newest of wrinkles in house surveillance systems has already spread to other provinces. A similar telephonelinked security system, Vidon, is being field-tested in Calgary, and B.C. Telephone is testing its own version in 200 Vancouver homes. FAST itself will be available to all Winnipeg residents by 1982. For established security firms, there’s tough competition ahead. Companies such as Chubb, ADT and Amplitrol have for some time offered similar “digital dialer” systems which automatically dial a central station with a taped message but can be tampered with by savvy intruders. Prices for such elaborate hardware can reach $2,500,

well above the cost of FAST. The companies claim people prepared to pay these prices are often those whose houses have been broken into before, who have valuables to protect or who simply love high tech.

While people are concerned about Canada’s booming crime rate, most are still reluctant to rely on anything more than the standard-issue tapered latch locks and chain locks—“totally useless in any security situation,” says Bill Truhlar of Bill’s Locksmiths in Toronto. Burglars, usually 13to 19-year-old youths, can easily slip a lock with a piece of plastic or a credit card. To foil such attempts, Truhlar and many police departments espouse traditional keyoperated dead bolts which thrust directly into the interior door frame.

But locks are also the item most heavily pushed by the industry. A current TV commercial for the Snibblock BARRICADE, manufactured by Van Wind Enterprises in Windsor, Ont., shows a 215lb. man administering 25 kicks to a door fitted with this lock (only after 89 blows does it give). High-pressure door-todoor sales and mailings pitching bodily protection have been launched in condominiums in Vanier, Ont., and Toronto for an even more hermetically sealed variety, the MUL-T-LOCK, a vault-like lock that throws rods into all four sides of the door frame.

Other conventional protection methods are no easier on the pocketbook, but

appear to be selling. Riverside Iron Works in Vancouver reports a surge in homeowner demand for burglar bars on lower windows and for property fencing (at a steep $75 a metre). “A lot of these are being bought by new Canadians,” says Peter Wallace, sales manager for the company, “Orientals especially who may have a rare jade collection or who keep a lot of money on the premises.” But even these barricades are penetrable by a professional thief. Someone wanted the prize gun collection of one of Wallace’s clients so badly that he sawed through the wall of the house.

“I don’t want people to get lulled into a false sense of security,” cautions Sgt. Ted Price of the Metropolitan Toronto Police Crime Prevention Department about the range of dubious security products. This problem has been particularly acute in Montreal, rocked last year by about 43,000 burglaries. Capt. Raymond Pommainville, commanding officer of the Montreal Police Crime Prevention Bureau, says that people don’t choose the appropriate device for what they want to protect. Homeowners often shun bulky but effective equipment for esthetically unobtrusive devices. Instead of installing adequate bars and locks, for example, they may merely exchange some window glass for Plexiglas.

More to the point, the lack of enforced industry standards has led to a glut of fly-by-night companies offering shoddy installation services and unreliable wares. An annoyingly high rate of mechanically caused false alarms (Metro Toronto police say 97 per cent of the alarms they receive are false) prompted the formation in 1977 of the Canadian Alarm and Security Association (CANASA), now representing 120 major security alarm companies across Canada. President Ken Thomas says CANASA is pressing for government regulation and across-the-board standards testing in the hopes of either elevating or eliminating scruffy competition.

information. In Toronto’s Etobicoke suburb, police are teaching night school courses in security, and in Montreal, police run a battery of information programs. Canada’s first major security device exhibition for the general public will take place in Toronto next month. And Toronto’s Tom Graham, who has published Canadian Security magazine for nine years as a trade publication, is now planning to reorient the magazine to appeal to consumers by 1982. The just-released pilot fall issue stresses jarring statistics: “ . . . residential break-ins are soaring as high as

60 per cent over last year’s figures.” “It’s something you hear about all the time, but when it happens to you, you feel angry,” says Philip Mitchell, a pharmacist whose Toronto apartment was broken into, along with five others in the same building on the same night. “They stole cash, but worse, my wife’s collection of jewelry and charms which weren’t valuable but which cannot be replaced.” The Mitchells have since retreated to Elliot Lake, a small Northern Ontario community where, says Mitchell, “People can still leave their doors open.” 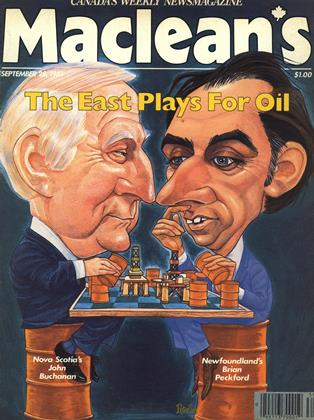