Hard on the heels of Margaret Trudeau’s first movie, Kings and Desperate Men, came a round of disgusted pannings from the people and the press. But the irrepressible Madame T., making a rare public appearance last week at the Montreal film festival as part of a contractual agreement to promote the bomb, was nonplussed. “As I looked at myself on the screen, I could only think of how sad and how much thinner I was [four years ago] when we were filming this,” she says. About her producerdirector-cameraman-editor Alexis Kanoer, Trudeau allowed only that theirs was “a very tempestuous relationship; we had lots of battles.” Venturing out with live-in boy-friend Jim Johnson, Trudeau attracted crowds in spite of the bad reviews. “It was nice to see that people still remember me and were so friendly,” says she. Of her newest stint—a co-host spot on an Ottawa TV

talk show Morning Magazine, beginning next week—Maggie muses: “Television is more the direction I see myself going in now. It’s more consistent with my lifestyle.”

New York Governor Hugh Carey’s delayed honeymoon this month in Greece (the birthplace of his new wife, Evangeline) and Ireland is proving anything but politic. Although his richer half is a multimillionaire, Carey is letting both the Greek and Irish governments pick up the lion’s share of the blissful sojourn, prompting The New York Times to label the jaunt a “honeymooch.” Since their April wedding, the Careys have maintained a frenetic social pace, leading Daily News columnist Jimmy Breslin, a onetime close friend, to label the gov. “Society Carey.” Meanwhile, Carey’s grasp of business has been so haphazard that key aide Michael Del Guidice resigned recently in disgust

and Chief of Staff Robert Morgado is rumored to follow. New York City Mayor Ed Koch, now running for reelection, is even joking about the value of an endorsement from his fellow Democrat: “Surely a nod from Carey would be nice, not for its vote-getting power, but just for old times’ sake.”

In just three years singer-dancer Sharon Devall, 21, has moved from a barmaid’s job in the northern Quebec town of Malartic to a Las Vegas nightclub booking because of her talent, determination and a strong resemblance to the late Marilyn Monroe. “I had the idea of doing an imitation of Marilyn about eight months ago,” says the former exotic dancer, whose current tour of the

Laurentian lodge circuit switches to Vegas next month. “I realized that I had the same facial structure, the same figure—36-24-36—and was about the same height.” Investing $1,500 in wigs and material to make three copies of Monroe’s dresses, Devall wowed onlookers at the fifth-annual film festival in Montreal last week. Audiences have to be content with the visual, however. Devall’s heavy French accent precludes any further comparisons.

When Johann Thorir, editor of the Icelandic magazine Chess, announced recently that he had been asked to stage a comeback duel between former world chess champ Bobby Fischer, 38, and an Icelandic player, he drew skepticism from the professional community. Arthur Bisguier, a grand master

on the staff of the United States Chess Federation, says: “It’s one thing organizing a game and another playing it. We have been hearing rumors for some months now that Fischer is planning a comeback. I know that he has recently stayed at the home of [former Canadian grand master] Peter Biyiasas in California. They had a few games of fast chess and Fischer won easily. He is still the best there is but I doubt that he will play ... we heard he was short of money.” Fischer, who has been in seclusion since beating the famed Russian Boris Spassky in 1972, nixed Thorir’s suggestion of playing Soviet defector and grand master Viktor Korchnoi. Says the editor: “He wants to play someone who isn’t among the world’s best.”

hen I first moved to TukT V toyaktuk, 13 years ago, I could see whales from my bedroom window—it’s all changed now,” laments Arctic landowner and physician Dr. Herbert T. Schwarz, who plans to leave the modern town of 700 to the tourists as soon as he sells his home—a former Hudson’s Bay Co. post built in 1927. Schwarz’s “little piece of paradise” 320 km above the Arctic Circle, which includes an acre of land bounded on three sides by water, the old store which was the first building in Tuk, a tourist lodge and a staff house, will not necessarily go to the highest bidder. “It should be a museum, not just for the tourists but for the native people there,” says Schwarz who hopes to interest an historically minded government agency or corporation. For now he is thinking about giving up life in Tuk in favor of a writing career and a new home. “I just want to move further north,” he says.

T’m the shy type. I like to stay in Athe background,” says 51-yearold Ingrid Dunster of Fredericton. But that’s not easy now that Mrs. Dunster’s Doughnuts have become the biggest edible thing to hit the province since fiddleheads. It all began six years ago when Dunster started making a few dozen doughnuts in “a small shack” on the outskirts of the city. Today the Dunster company has a modern downtown bakery, 15 employees, and sells thousands of plain, sugared and whole wheat doughnuts each week to supermarkets, restaurants and sweettoothed citizens. “Dumbfounded” by her success, Mrs. D. says: “The thing that amazes me is that people don’t just buy one dozen at a time. They buy five or 10.” Though offers to open up franchises (à la Tim Horton’s) have been pouring in, and the Robin Hood Flour company is after the rights to premix

the Dunster doughnut compound, the retiring Mrs. D. is keeping her recipe a secret.

t is Aug. 12, 2017. The world conAtinues to pursue its rocky course like a confused drunk! A floundering economy, crumbling societies and tense international relations are the order of

this day____” So begins the saga of Star

Rider and the Peace Machine, the latest comic-book effort by Calgary’s Richard Comely, the 30-year-old creator of the recently deceased cult hero Captain Canuck. Overcoming his previous “naïveté, inexperience and stupidity” about the publishing business, Comely plans to debut the $1.50 Star Rider in both Canada and the United States this month. His initial goal is to make some money—Canuck left him $70,000 in the hole—but the devout Mormon also wants to make young people aware of such possibilities as the global business community and the Communists conspiring to take over the world because “Kids don’t get a true picture from television and newspapers.”

If you can’t afford the $19,000 Lincoln Continental custom-tailored by American designer Bill Blass, and you can’t round up $2,400 for one of his original ensembles, there’s no need to despair. For a mere $16 anybody can bring home a one-pound box of designer candy-complete with status BBs embossed on the top of the chocolates. It’s a sweet deal for the multimillionaire designer. Nevertheless, “Blass never gets involved unless he thinks he can make a valid contribution,” says a company spokesman. Besides giving his approval to a modern box with a brushed steel surface, Blass’s contribution has been restricted to vetoing nougat candies because the white color would clash with the dark chocolate and banning pastel cream fillings, claiming they “connote cheapness.” The candies are, in fact, too high-tone for the master. Confides Blass: “I’m a Snickers man myself.”

lnpor those of us who use the eleA vator all the time, it was nothing special,” shrugged Vancouver Aldderman Bruce Yorke after being trapped in the city hall’s executive elevator along with three visiting officials from the U.S.S.R. Though they were quickly rescued, the elevator incident wasn’t the first Canadian mishap for Professor Ivan Duz, Odessa Mayor Anatolyi Malykhin and Deputy to the Supreme Soviet Tamara Dudnik as they travelled recently to Odessa’s sister city of Vancouver. In Montreal the trio was left for several hours at the airport looking for a welcoming party that never showed— the telegram they had sent to city hall in Russian had not been translated. After the elevator incident, things went smoothly, including Vancouver Mayor Michael Harcourt’s rendering of the traditional Russian toast “Na zdorovie!”— a vast improvement over the 1979 Vancouver version delivered in Odessa by city manager Fritz Bowers, who raised his glass and intoned, “Dostoevsky!” 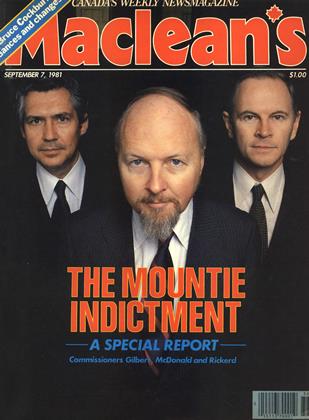