Gypsies up the fee for fortunes Wendy Dennis January 18 1982

The bait arrives by flyer with the morning mail: come today—tomorrow may be too late. The spiritualists’ claims seem lofty but innocuous. One, an adviser on all problems of life, has the God-given power to heal. Another, a card and palm reader, uplifts the sick and depressed. From the four corners of the world people come to yet another who guarantees to remove bad luck.

Fortune-telling, the traditional livelihood of gypsy women, has long been regarded as bizarre yet harmless entertainment. Recently, however, police in a number of cities have become concerned by the numbers of unscrupulous spiritualists who begin with a fortune and end with a serious fraud. Elaborate and macabre (hence more expensive) rituals are now replacing the advertised tarot and palm reading sessions as gypsy women, often the sole generators of family income, attempt to boost their earnings. The gypsies, many of them of Spanish origin, operate wherever there’s a market. In Saskatoon, according toRCMP Corp. Beatty Navid who participated in a joint investigation with city police earlier this year, up to $4,000 has been lost by unsuspecting marks to socalled fortune-tellers. Insp. Ted Taylor, head of special investigations with the Edmonton police, reports that since April offenders in that city have taken victims for as much as $1,000. Toronto fish are bigger. Sgt. Richard Dewhirst, who with Const. Chris Ellis of the Metropolitan Toronto Police has been investigating gypsy fortune-telling shops for three years, says that 1981 saw one $20,000 and two $30,000 swindles in that city. While Toronto is the centre of activity today, with about 50 gypsy families and 30 active, advertised premises, the fortune-tellers are transient and, says Taylor, the trend is moving west.

According to police, about 70 per cent of the fraudulent fortune-tellers’ victims are middle-aged women distraught about family illness, marital or fertility problems. Especially vulnerable are Italians, Portuguese, Greeks and West Indians, who often maintain belief in curses and the evil eye. But not all victims are immigrants and women. Last year, one 30-year-old Toronto professional man, plagued by a faltering marriage, sought to unburden himself by consulting a spiritualist recommended by his mother. He was unburdened of $16,000.

The scam works like this. Susceptible victims, lured by the grandiose promises of a flyer or ad to the fortuneteller’s storefront shop, are instantly warned that a curse grips them. On the next visit, having assured the victim of evil’s stranglehold, she sends him home with an egg or tomato to be rubbed against the body and with instructions to return again with the charmed item swaddled in a white handkerchief. In a dimly lit room the fortune-teller spins the handkerchief wildly and prays fervently in the language of the client’s

choice. At the climactic moment, using deft sleight of hand she performs a switch and completes the setup. Unravelling the handkerchief, she reveals a grotesque clump of hair or foul-smelling rotten scrap of meat peeking out from the smashed egg or tomato—indisputable evidence of a vile curse. The terrified victim is urged to hand over an appointed sum in the white handkerchief in mystical denominations (seven one hundreds or $999.99 are common requests), and assured the cash offering will be buried in a graveyard at

midnight or burned for the powers that be. If the spirits remain unsated more money is demanded. And if pressed, in lieu of cash the exorcist treats herself to a buying spree courtesy of her victim’s credit card.

The fact that people actually fall for the theatrics is not surprising, according to Ellis, since gypsies do show an uncanny ability to judge character and stand a 50-50 chance of providing an accurate reading. While investigating a fortune-teller, Ellis once received a “dead-on” palm reading himself: “She told me things only my partner knew. If you’re at all vulnerable and that happens, you believe.” Gypsy legend also holds that fortune-telling is a Godgiven gift, first bestowed when a gypsy stole the fourth heart-piercing nail from Christ’s cross, thereby reducing his suffering. But fortune-tellers translate that “gift” into street smarts. Ellis and Dewhirst have seen instances where immigrant women who have never ventured inside a bank secure hefty loans using as collateral their joint interest in the family home—an interest many of them didn’t even know they had until a fortune-teller told

them. “It’s just like payday” for the gypsy, says Ellis.

Payday was profitable last July for one fortune-teller still on the lam who took a 40-year-old Toronto business woman for $30,000. The woman, desperate over a brutal marriage, answered an ad in the personals, got what she considered a true reading, and visited the spiritualist about 20 times over five months. Counselled by the fortuneteller to leave her husband, she did, and then agreed, after participating in a number of mystic rituals, to bring cash from a recent house sale for the gypsy to bless. After the rigmarole, involving much banging of stones and rubbing of coals, the two women visited the victim’s safety deposit box, where the fortune-teller advised her to leave the cash for 21 days. Eleven days later she panicked and opened the safe. In the handkerchief was a neatly stacked bundle of yellow pages cut from the telephone directory. “It was all a bunch of crap. I know that now,” says the hapless victim. “But she seemed to have such wisdom and strength—everything I needed

then. I thought a miracle could happen in my life.”

Getting victims to report the swindles is the greatest obstacle for police in eliminating the practice. Ellis estimates only about five per cent of such frauds are brought to light, usually by clergymen or relatives but rarely by victims, who are either too terrified of the gypsy’s malevolent powers or too humiliated to press charges. In three years, Toronto police have made only 60 arrests, thanks largely to informers.

To keep good faith with the police and because many of them fear jail sentences some gypsies sit on the money and return it if a complaint surfaces. (The maximum penalty for fraudulent witchcraft and fortune-telling under the Criminal Code of Canada is $500 or six months in jail or both.) Since complaints are rare, however, police believe large sums go unrecovered. To aggravate the problem, Toronto bylaws do not require a licence before a fortuneteller hangs her shingle. In other cities where licences are required, either the gypsies don’t bother to obtain them or

the licence pertains to the premises alone, and the transient offenders can’t be traced. “What it amounts to,” says Taylor, “is that anyone can do this, and we have no control over them.”

To the gypsies, however, it’s all much ado about nothing. Says one Torontobased gypsy: “They come in here crying and pleading for help, so we do what a psychiatrist does and probably charge less. A $2,000 to $3,000 score only covers the monthly bills. We’re harmless—just out to make a buck like everyone else. They say everyone’s got a gift, and this is ours; it’s written in the stars.” &lt£> 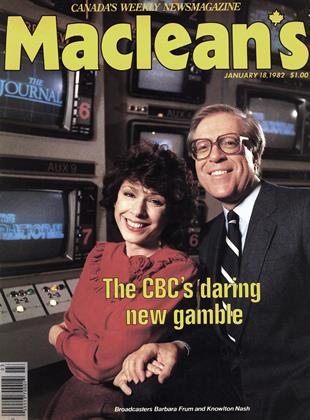