A dose of pride, a sense of self for Norman Rockwell’s America Peter C. Newman January 25 1982

One thing is certain: Ronald Reagan’s America is different. The White House is no longer the sleazy quagmire of the Nixon Years, nor is it presided over by stumbling mediocrities such as Gerald Ford and Jimmy Carter.

The 43 million Americans who put Reagan into office acted only partially out of ideological concerns. Fed up with government inefficiencies, escalating overregulation and the erosion of national pride, the voters demanded fundamental change. Reagan knew how to draw on this yearning because he genuinely shared it. When he repeatedly portrayed the U.S. of A. as “this great dream,” advocating the return to “tested and tried values,” he was appealing to the nostalgic notion of a Norman Rockwell America held dear within the American psyche—even if it never really existed.

Ironically, it was the theatrical attempt on his life that brought out Reagan’s most engaging qualities— his lack of self-importance and his ability to inject humor into the most incongruous situations life can dish out. (When his quarrels with Congress resulted in a temporary halt of all nonessential government work, a cheeky ABC interviewer asked Reagan whether he classified himself as an essential worker. “No one told

me whether I was or not,” the president replied. “I sat there in the office, just in case somebody tried to take it over.”)

The most encouraging aspect of Reagan’s presidential style is that despite his bellicose posturings, he has been able to strike the occasional bargain between political realities and simplistic beliefs. His decision to resume grain sales to the U.S.S.R. (because he thought Jimmy Carter’s embargo placed an unfair burden on farmers), while at the same time acting as the chilliest of Cold War warriors, exemplifies this essential pragmatism.

Reagans voodoo economic policies remain the most vulnerable aspect of his presidency. The definitive commentary on Reaganomics is to compare the enchantment expressed by Budget Director David Stockman in Newsweek in February, 1981, with the disillusionment of his Atlantic interview 10 months later.

Americans tend to view their presidents as spiritual leaders, pretending that the man who occupies the Oval Office is a distillation of themselves on a higher plane. Ronald Reagan has fallen far short of transforming the U.S. into what he boasts of as “the golden hope of mankind.” Yet as the review of his first year in office documents (page 36), he has managed to restore a measure of pride to a nation desperately aching to inspire itself. That’s not a bad start. 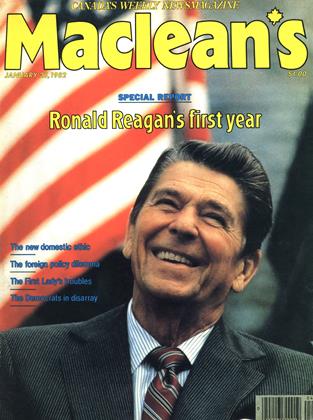