of cancer, in Toronto. A prolific reporter and exacting administrator, Goodman started in newspapers at the age of 16. He rose rap-

idly at the Toronto Star from a reporter at age 23 to managing editor 10 years later and, ultimately, in 1978, to president and chief operating officer. Goodman was immediate past president of The Canadian Press and was awarded the Order of Canada last October.

REDI ( El): The eight-year prison sentence of Florent Cantin, the unemployed partygoer who, while playing with a lighter two years ago, set a New Year’s Eve fire in the Chapáis, Que., community hall, killing 49 people. In reducing the sentence to two years less a day, three judges of the Quebec Court of Appeal noted that other factors—inad-

INVALIDATED: A visa held by Northern Ireland’s extremist Protestant politician, the Rev. Ian Paisley, by the U.S. State Department. The leader of Ulster’s hard-line Protestant Democratic Unionist Party was scheduled to make speaking and fund-raising tour of the U.S. from Jan. 15 to Jan. 28. His visa was invalidated after 126 members Congress protested to Secretary State Alexander Haig.

career as an alderman and then mayor of Stratford, Ont. An MR for the riding of Perth from 1953 to 1972, Monteith

was minister of health and welfare from 1957 until 1963, during which time he launched Canada’s fitness and amateur sports program.

Elizabeth Taylor, 49, from her sixth husband, U.S. Senator John Warner, 54. After aiding in her husband’s 1980 election campaign, &l;Taylor abandoned the

pastoral life of senator’s wife and gentlewoman farmer last May to make her stage debut in Lillian Heilman’s The Little Foxes. She now plans to found a repertory company which will feature herself and other Hollywood stars.

president of Argentina following the dismissal of Roberto Viola by the ruling military junta on Dec. 11. Galtieri is the third military president in the economically troubled country since Maria Estela Perón was toppled in 1976.

In your profile on Allan Gotlieb (A Chess Player's Moves to the Top, Dec. 7), Canada’s most distinguished diplomat, I am somewhat bizarrely described as “eccentric.” Certainly your handling of the quotes I gave you is eccentric and bizarre. The first quote leaves the clear impression that former camp counsellor Gotlieb would have been too busy reading books to save a bevy of campers from drowning. In your hands, my feeble attempts at bonhomie and humor have turned Gotlieb into the cruellest mass murderer since Charles Manson. You quote me as saying that I have as much in common with Gotlieb as I do with a “. . . Massey-Ferguson tractor.” In terms of class, social status and world-weary sophistication, that is probably true. But in terms of purity of soul, good memo writing and good looks, Gotlieb and I are certainly equals.

Your article about our new ambassador to the United States, Allan Gotlieb, is the most vindictive piece of journalism I have ever read. In your eyes Gotlieb is a bad choice because he is an intelligent person who doesn’t stay up and drink scotch all night. —S.D. GOLDSTEIN,

Pulling on the heart strings

I find it terribly ironic to read an episode of Tug of Love (Canada, Nov. 30) in the same issue as an article dealing with the question of sterilization

of mentally handicapped people (Justice, Nov. 30). The selfishness displayed by Jason Read’s parents is surpassed only by their apparent lack of concern for the emotional well-being of their son. Perhaps sterilization of so-called “normal” people who abuse their children by using them as pawns in failed adult relationships should be legislated immediately. I have been most fortunate in counting several mentally handicapped people among my friends and have always been impressed with their lack of need to pursue self-serving interests. —GAIL K. CONRAD,

Your article on the sterilization of the mentally handicapped doesn’t tell the whole story. I have a patient who was sterilized by the province of Alberta at 14 years of age. Later, I learned that she had been living with different men and treated mostly as a burden until she was thrown out on the street, and, of course, she was not covered by social assistance. It irritates me that, at 14, the province found her to be so handicapped that they ordered sterilization and that now we have to prove she is entitled to some assistance. The worst I have to prove is that they were right in the first place. —J.J. TERAN, M.D.,

Vote for the noose

Mac Haig’s podium, Crippling the Long Arm of the Law (Dec. 7), is correct and long overdue. At present we have a system that protects wrongdoers and not the wronged. What a shame! What a blot on our society. —JOHN E. GIDLUCK.

Your article on Robert Bateman (Profile, Nov. 23) restored my faith in the arts. For too long now talentless people have spewed out abstract blobs that lot of pretentious people have touted as art. Whether Bateman paints animals or garbage cans makes no difference. He has the one quality that should be associated with art—talent.

We could still find some who hold that motherhood and parenthood are gifts of giving and receiving that are not duplicated in day-care centres (Consumerism, Dec. 7). Your article strikes sour note. It derogates the “little lady down the street, or ‘Auntie Flo,’ ” suggesting that professional attention is what our babies need. To all the Auntie Flos who, lacking degrees and for poor pay, have loved our kids and provided individual attention to the child and parent, let us say thank you from the bottom of our hearts.

People like those mentioned in your article Caring for the Little Children only pretend that they are concerned about how their children will be raised. If they are so worried, why don’t they stay home and raise their children themselves? I’ll tell you why—it’s so much easier to place the blame on someone else if something goes wrong. And if finances are a problem, they could always look after a couple of other children as well as their own, which would also teach their children, the value of sharing and companionship. People seem too greedy. They’re not willing to postpone having everything for a few years in favor of giving their children a good start. What’s more important, five years out of your career or five years of a child’s life? -DARLENE DEELEY, London, Ont.

Your article on day care made me feel angry with Canadian women. They are more in love with their paycheques than their children. A woman’s place is in the home, at least until a child reaches school age. But this could only be done when overspending is stopped. A child doesn’t care if everything you have is the best. A child only needs a parent’s love and care. — R. BIRCH,

Letters are edited and may be condensed. Writers should supply name, address and telephone number. Mail correspondence to: Letters to the Editor, Maclean’s magazine, 481 University Ave., Toronto, Ont., M5W1A7. 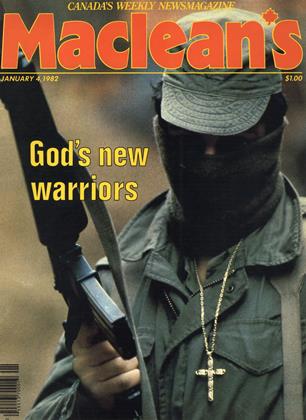