Both Willis St. Jean and Lawrence Sutherland look their 57 years. Since they started work at 14, they have weathered a world war and mining accidents and the everlasting cycle of boom times and bad times that is Northern Ontario life. But they were never unemployed until the nearby iron mine began temporary layoffs last July. They sit in the lounge of the Fraser Hotel in Cobalt now, sipping beer and eyeing the young folk who are playing pool, because there is no use looking for jobs that do not exist. They say they can cope because the mine will go back to work in a few days. But they also say that when they go to the polls next week—in one of the three federal byelections—they are going to show the Liberals that they are “fed up.” St. Jean says, “We feel sorry for the young guys that have mortgages.” His buddy Sutherland adds, “People have no more faith in the Liberal government.” Worries like those of St. Jean and Sutherland spell trouble for the federal Liberals in the three byelections in Ontario on Tuesday. In good economic times the outcome would be routine, because the party in power traditionally loses. But as the country rolls into a long, hard winter of crippling unemployment, strategists from all three parties are keeping an anxious eye on the races. The three ridings are regarded as microcosms that are likely to reflect the mood of the country. Strategists will be watching the size of the Liberal vote to see if the party can survive the voters’ wrath. And both the Conservatives and the New Democrats are vying for the bulk of the protest vote. That means that all three parties are campaigning fiercely in all three ridings on national issues. And it also means that each party feels it has much more at stake than a few extra seats in the House of Commons.

The three ridings—Timiskaming, Broadview-Greenwood and LeedsGrenville—are worlds apart, but the issues are almost identical: job creation and job security. The forests, mines and farms of Timiskaming sprawl over more than 33,000 square miles. The riding was held by Liberal Bruce Lonsdale, a feisty former Cobalt mayor, who died in a car accident last January. Toronto’s downtown Broadview-Greenwood rid-

ing is a big-city jumble of workingclass, ethnic and trendier-than-thou voters who lost their superstar, New Democrat Bob Rae, when he snared the leadership of the provincial party last winter. And rural Leeds-Grenville, a dyed-in-the-wool Conservative fiefdom in eastern Ontario, was held by Conservative Tom Cossitt, who died of

heart failure last March. Despite geographical differences, candidates in all three ridings insist that the voters are fretting most about jobs. And that concern mirrors the national unease: new data from the authoritative Decima Research Ltd. of Toronto shows that 67 per cent of Canadians feel that their prime worry is that they or the main family income earner will lose their employment—up from 44 per cent just a year ago.

The most fascinating riding is Timiskaming, where all three candidates actually have a chance of winning (in fact, the Liberals were ahead in informal polls taken before the election date was set). New Democrat Arnold Peters, 60, held the seat from 1957 until 1980, when the brash young Lonsdale defeated him. Now, Peters is campaigning as a

laid-back populist who will help the little guy through hard times. He makes no secret of the fact that he is not comfortable around businessmen—or some of the power-seeking young guard in his own party. Peters talks longingly about nationalizing the banks. “The pace is slower here,” he maintains. “We don’t want to be rich and we are willing to tighten our belts. But we don’t want to be unemployed—and nobody’s job is safe now.”

Peters’ appeal as a man for the “little guy” is, however, his greatest weakness—and both opponents have been quick to capitalize on it. “Northern Ontario generally prefers guys who are aggressive, out for development,” says the dynamic Liberal candidate, 35-year-old businessman Pierre Belanger. “Nothing ever happens up here unless you make it happen—and the NDP has no growth or development orientation.” The Liberal tells constituents that a Grit MP can wangle “things” for the riding because the party holds the purse strings. “I tell them if they want to protest, I will pay for the train tickets or the postcards,” he says. “But I also tell them, ‘Don’t screw us up for the next two years by putting in an ineffective guy.’ ” Caught between these two extremes, the Conservative candidate is a mild-mannered, fiercely ambitious industrial hardware salesman. Tory John MacDougall is not an effective speaker and he does not sound much like a small “c” conservative, but he has a secret weapon: “I tell

people that if they are pleased with what the Liberal government is doing, they should vote Liberal.” A tireless campaigner, MacDougall’s protest appeal has been draining votes away from both traditional northern party powers in all parts of the riding.

Decima President Allan Gregg says that Timiskaming’s classic three-way confrontation will likely present the most accurate picture of the national mood. Although the Conservatives have the best image as problem solvers now, a staggering 40 per cent of Canadians think that no party has the best answer (this figure has doubled since the fall of 1981). Since the voters think no party has the answer, the opposition can win byelections only if the voters decide to

go against the government to dramatize their anger at the lack of answers. Gregg maintains: “The level of dissatisfaction with the performance of this government is well over 70 per cent. Now the election has come along and it’s focusing their choices. They are starting to regard the election as the one act at their disposal which will give them an opportunity to display their demands.”

The Toronto racé in BroadviewGreenwood has less national relevance because the Conservative vote has been split. That Tory division has, however, erupted into a bizarre, brass-knuckle fight that has produced titillating headlines across the land. The race has diluted the protest vote to such an extent that NDP candidate Lynn McDonald will probably romp to an easy victory in this traditional NDP stronghold. The Conservative fight began when 34-year-old provincial political aide Bill Fatsis managed to snare the nomination away from Toronto Sun Editor-in-Chief

Peter Worthington. Fatsis argued that he won “fair and square.” Worthington countered that Greek constituents ganged up to help one of their own. He deplored “hyphenated Canadianism” and, after supporters threatened to boycott the election or vote NDP, he set out to run as an independent, and now he may split the protest vote. Charges of racism from both camps have left a nasty taste in the mouths of many voters.

The amiable Fatsis still gambles that people are sufficiently “fed up” to switch to the Tories. Worthington, in turn, is appealing to voters who have had enough of everyone: “Voters are absolutely delighted at the thought that my presence is driving the parties cra-

zy—they are scared to death—and everybody likes the idea of thumbing their nose at the system.” Liberal lawyer David O’Connor, virtually ignored in the circus, quietly pitches the message to narrow-eyed constituents that a Grit can get “more” for them from Ottawa. Meanwhile, the field has been cleared for the NDP’s McDonald, a no-nonsense feminist who has managed to stay aloof from the unseemly fray. “People are aware that the recession is not just a national calamity—there’s a sense that there has been mismanagement,” insists McDonald. “People want more control of the economy and they know that in a country like Canada it’s got to involve government in some capacity or other.”

Leeds-Grenville, with its solid Conservative stock, is the most predictable riding. Cossitt’s widow, Jennifer, the Conservative candidate, will probably get her wish for “a decisive vote that will show the Liberals that the people are looking for a change.” Liberal can-

didate Chuck Anderson, a Brockville lawyer, admits that his chances are not good when voters are fretting about jobs. New Democrat Mildred Smith, 41, is preaching the traditional NDP message about jobs and job creation in a riding that traditionally never pays attention. “Folks here have a sense that their government is really not listening to ordinary Canadians,” says Prescott Mayor Sandra Lawn, an active Conservative. “They are actually really depressed.” The biggest worry now for all three parties is that the byelections will be seen as a chance to punish the nonlistener and to reward the party that has listened best. In that kind of contest, all three parties have a lot to win— and lose. 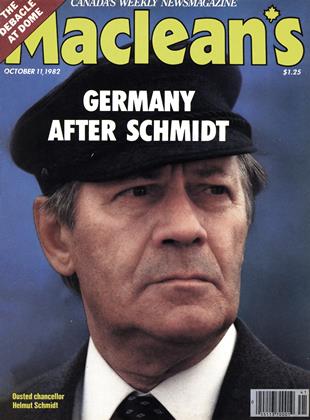