The three specks in the Caribbean that make up the Cayman Islands have little to boast about. Their rocky, alkaline soil supports little more than coconut trees and iguanas; the traditional turtle fishing industry has all but died out, and most imports have to be hauled at least 650 km by sea or air from the tip of Florida. Despite that, the islands’ 16,000 residents share their country with the offices of 31 banks and trust companies. The attraction: no corporate income tax and banking secrecy laws that rival Switzerland’s.

the directors of the Bank of Nova Scotia. Charges that surfaced this month about the operations of their bank’s Cayman branch have brought both embarrassment and criminal prosecution to BNS.

The most serious blow came last month when a 23-member U.S. grand jury in Denver released the results of a 21-month secret investigation. The 62page indictment charges that BNS and the former manager of its Cayman branch, C.M. (Monte) Smith, knowingly concealed and participated in a conspiracy to create $122.5 million (U.S.) in phoney U.S. tax deductions. The jury’s charges came in the middle of a U.S. crackdown on illicit tax shelters and they mark the first time that a non-U.S. bank has been charged.

According to the indictment, the complex fraud was organized by William Kilpatrick, an American businessman who apparently owns or controls at

least five corporations based in Denver and the Caymans. In 1977 Kilpatrick, with the assistance of his Denver lawyer, Decían J. O’Donnell (both of whom are also charged in the indictment), began promoting a coal tax shelter that—in itself—was not illegal under U.S. law. Kilpatrick’s network of salesmen told potential customers that by joining the shelter they could receive an annual income tax deduction equal to four times the amount of money they invested. Essentially, the investors were advised that the shelter was a partnership that had agreements with coal producers to buy a specified amount of coal at a fixed price. But the real hook was not coal speculation but

tax reduction. Under U.S. tax law the investors were allowed to deduct any advance payments made to the coal companies from their personal income tax. Not only that, but contributors were also able to lever the cash that they put into the plan with borrowed money. In this case, it was announced that between 1977 and 1979 the P & J Coal Co. Inc. of Pennsylvania and Colorado would loan each investor an amount equal to three times their annual cash investments.

In the view of the U.S. Internal Revenue Service, there was nothing wrong with that portion of the plan. But the grand jury contends that Kilpatrick, O’Donnell, Smith, the bank and two others kept one important detail hidden: “P & J Coal did not have sufficient

resources to make any of its required payments to investors.” To disguise that fact, Kilpatrick and his co-conspirators “engaged in nothing more than a ‘check kite’ and/or ‘check swap’ for the purpose of making it appear that P & J Coal had, in fact, made its required payments.” And that is where Smith and BNS’ Cayman branch came in.

The cornerstone of the kiting scheme was Marlborough Investments Ltd., a Cayman corporation that was secretly acquired by Kilpatrick. (The indictment charges that the bank and Smith helped conceal Kilpatrick’s control of this firm.) Despite the fact that Marlborough had only $371,250 (U.S.) in its account at the BNS Cayman branch, Kil-

Patrick “caused” it to issue a cheque for $18,855,600 to another Cayman corporation, Big C Companies Ltd., which the jury says “had been established to receive these ‘funds.’ ” Although the cheque was not covered, the jury says that BNS processed it. At the same time, Big C also wrote a cheque for $18,855,600 on its BNS account. Again the bank cleared the cheque—which was payable to P & J Coal—despite the fact that it was only covered by $3,000 and Marlborough’s “worthless” cheque. Once the second cheque in the chain was in its hands, P & J wrote a series of cheques, again drawn on the BNS, totalling $18,855,600 and backed by “worthless” paper. Once more, it passed through the bank’s system and this time landed in the accounts of the coal companies that were linked to Kilpatrick’s tax shelter. In effect, that was the P & J Coal loan that was boosting the tax deductions of the shelter investors,

according to the grand jury. The cheque-writing circle was completed when the coal companies—which the indictment says are controlled by Kilpatrick-pretended to become investors in Marlborough. Again, the familiar pattern was repeated.

For its part, the bank denies the charge that it knew the fund transfers were “fictitious” and designed to give the false impression that P& J had made its loans. In a terse statement approved by its senior officers and lawyers, BNS said it is “shocked at the accusation that its Cayman Islands branch has violated the laws of the United States” and is convinced that the branch is “innocent of any wrongdoing.”

This week the eight defendants in the case will converge on a Denver court to enter their pleas on the charges. While the bank would not reveal in advance what its lawyers and Smith plan to say, the statement promises that the bank will “defend vigorously this attempt by the U.S. Justice Department to hold it responsible for the alleged illegal acts of others.”

For his part, Smith now works for the Caribbean region offices in the bank’s Bay Street tower in Toronto. But last week yet another embarrassing report surfaced about his activities as branch manager in the Caymans. The Wall Street Journal told the tale of a former Caymans customer of Smith’s who now believes that the bank has betrayed him. In October, 1980, Dallas businessman Douglas Carlton received $290,000 from a man who, according to court proceedings, stole $4 million from elderly depositors in a California savings and loan institution. On the suspicion that the S & L might not agree with his contention that the funds were a “strictly legitimate” payment for “services rendered,” Carlton flew to the Caymans and visited Smith’s branch. Carlton recalls: “I looked him in the eye and said, Ts there any way anybody can tie this money up?’ He gave me some song and dance about the Brink’s robbery money going there [to the island] and that there was no way anyone could find out about it, much less tie it up.” But the S & L did trace the funds and obtained a U.S. court order freezing the account pending Carlton’s trial for fraud. At first the bank resisted the order but eventually gave in. The bank will not comment on the case.

In the meantime, government bank officials in Ottawa plan to watch the Denver court proceedings closely. William Kennett, Canada’s inspector general of banks, says that he intends to let the U.S. court action run its course. If it rules against the bank, says Kennett, the time will probably be ripe to consider recommending that BNS tighten up its internal inspections. 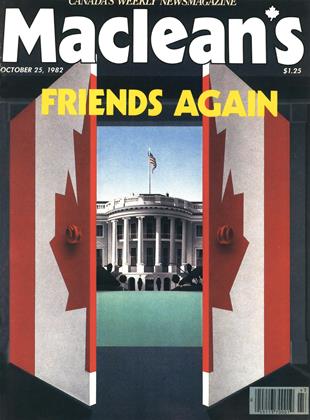