The lights went out at Arrowhead Stadium in Kansas City Thursday night. Smothered in the darkness were the bright hopes of local fans that the beloved Chiefs would do them proud in the team’s first appearance on national TV in five years.

But, for the first time in the National Football League’s 63-year history, a strike cancelled a game.

It also threatened a virtual way of life. The shadows had been lengthening since January’s Super Bowl, but when the strike finally came after the Green Bay Packers disposed of the New York Giants last week, fans, gamblers and television advertising executives were suddenly awash in gloom. Football widows and widowers had their mates back, for better and for worse.

Labor strife has become as much a part of modern sport as pennant drives and rushing averages. But the NFL has long been a model of stability for hockey, basketball and baseball club owners.

The business of football wasemdash;depending on any settlement, it may still beemdash;a Horatio Alger dream without nightmares. From rocky beginnings in the 1930s and ’40s, when the league fought to wrest fans from old collegiate loyalties, the NFL has become a multibillion-dollar enterprise dispensing a product more American than apple pie to a seemingly insatiable audience. Unlike football, other major leagues faced spiralling salaries because of upstart rivals and free-market bidding for talent (free agentry). The NFL swallowed its major competition (the AFL) and, although it released its players from bondage, it set them free only to no-bidding agentry. But, above all else, the NFL clubs devised a scheme to share their astronomic revenues emdash;the latest TV contract splits $2.1 billion among 28 teams over four yearsemdash; and render the worst team as viable as the Super Bowl champs. Andrew Carnegie would have approved.

But the contract demands of the NFL Players Association (NFLPA), whose average members are the lowest paid in professional sport, not only trample on apple pie, they challenge the very tenets of U.S. big business. At stake are not just money, benefits and freedom, but control of the shop.

The NFLPA’s slogan, “We are the game,” reflects the ire over comparatively paltry salaries in the face of huge profits. The original demand was for 55 per cent of the owners’ gross proceeds ($14 million per team in 1980emdash;hockey and basketball players reap slightly more than 55 per cent). Just prior to the strike the NFLPA demand was adjusted to 50 per cent of current and future TV

revenues. The package would include $1.6 billion over four years from TV, $56 million for signing bonuses and $8 million in other benefits. Whatever the source of the sums, the uniqueness of the demand is that the funds go to the players through their union. The unionemdash;not ownersemdash;would set salaries and bonuses. The employees would run the business. Andrew Carnegie would not approveemdash;nor do all of the $600,000a-year superstars.

In a final pre-strike effort to maintain control, the owners offered a package worth $1.6 billion over five years. It contained a revision of the free agent system, increased benefits and bonuses which, the bosses claimed, could mean as much as $100,000 to a veteran player. But the union didn’t bite, and the players walked.

As both sides then addressed contingency plans, the Canadian Football League ironically trundled before an unsuspecting U.S. audience. The NFL owners cited a clause in the last collective agreement that prohibits players from working for any team but their NFL club. At week’s end the players countered with a lawsuit demanding the right to play in all-star games that entrepreneurial maverick Ted Turner plans to broadcast on his super-satellite network. The big U.S. networks, paying $16 million last week for dark stadiums, facing the loss of $80,000 for each 30-second commercial, looked north. NBC struck a deal to pick up CFL games at a mere $100,000 each.

The reaction of American fans to endless end zones, unlimited backfield motion and two 50-yard lines will not be known until this week. Unfortunately for Canadians, the novelty of listening to veteran NFL announcers and analysts struggling with the foreign version of the game will be blacked out in the major population centres. Thus, for the legions of vicarious Canadian NFL fans, the strike is a total loss; they don’t even get their favorite American sportscasters. And while murmurs surfaced of renewed contract talks, NFL fans on both sides of the border could take solace in the knowledge that their local bookies wouldn’t be reaping a multimillion-dollar harvest from their hunches, at least for one week in the season. lt;£gt; 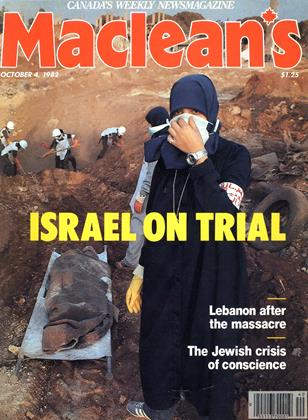