What a season it might have been. The National Football League players’ strike made the Canadian Football League the only game on the continent; CFL fans outside of northern Alberta were presented with the tantalizing prospect of a team other than the Edmonton Eskimos winning the Grey Cup; Nelson Skalbania had fled Montreal; the league’s first domed stadium was under construction; expansion was in the wind down east; and the Toronto Argonauts were actually winning some games. But, as the CFL regular schedule wrapped up last weekend, much of the season’s early promise had been swept away by the predictable and the unforeseen.

As football fans across the United States panted for their weekly pigskin fix during the first weeks of the NFL strike, the CFL was foisted on them by the National Broadcasting Co. While American aficionados chuckled over playing fields “with the approximate dimensions of Manitoba” and such novel innovations as having “the fast black guys play quarterback and the slow white guys go long,” the CFL played its way off network TV with one-sided, boring matches. Characteristically, the CFL staged record-breaking, intensely exciting games the day after NBC pulled the plug. Perhaps it was just as well. Americans, accustomed to watching 28 pro teams with 28 different names, had difficulty enough with three downs let alone discerning the difference between Rough Riders and Roughriders. Their bewilderment would only have increased if they had been given the chance to watch the Saskatchewan ’Riders win six, tie one, finish last and out of the playoffs in the West; and the Ottawa ’Riders win five, lose 11, and finish third in the East with a chance at the league championship.

Meanwhile, the Eskimos grindingly disappointed their rivals. Those heady days of July when the Esks lost three in a row gave way to sober acceptance of their excellence as the team ran up 10 wins. Any hopes that the Concordes would rise phoenix-like were dashed as the Cones found one less win amid the rubble in Montreal than last year’s Alouettes. But aid for the Cones’ quest to climb out of last place in the East is perhaps on the way. Last week in Halifax the expansion franchise proposed for the 1984 season was christened—the Atlantic Schooners. (If and when To-

ronto plays the Schooners, the league will add to its uniqueness by having two blue-and-white-clad teams go head to head with stylized boats and letter “A” insignias on their helmets.)

John Donoval, the Maritime Professional Football Club Ltd. president, says, “We’re right on schedule,” but doubts linger about the willingness or ability of the recession-plundered Halifax-Dartmouth area to support the average annual budget of $5 million for a CFL franchise. The club contends that it will be able to build a 30,000-seat stadium for “no more than $6 million,” and, while insiders point to Dartmouth, a stadium site has yet to be officially chosen. In British Columbia, meanwhile, the problems are equally

formidable. Next year’s season ticket sales target of the CFL’s last expansion club, the Lions, adds up to a capacity crowd for the Schooners. This month the 144 Teflon-nylon panels that make up the roof of the new $126-million stadium at B.C. Place are expected to be floated over the structure. The Lions, as is their tradition, bolted from the gate only to slink out of the playoffs—taking with them optimism for season ticket sales of 30,000 and prospects of filling the 60,000 seats next season.

Filling CFL rosters may also be a challenge. The new United States Football League plans its inauguration next March, and already two of the best coaches in the CFL, Hugh Campbell of Edmonton and Ray Jauch of Winnipeg, will jump to the new league in 1983. The two men have openly criticized the low salaries for CFL coaches, as compared to their USFL pacts, and U.S.-born CFL players are looking south longingly at the USFL dollars. The recent disclosure that there are salary disparities of as much as $200,000 among CFL all-stars has not endeared the league to players of any nationality. And no Canadian club was pleased about reports that Carling O’Keefe Ltd. of Toronto had purchased the USFL Canadian TV rights.

Back on the field, for reasons that would baffle mystics and successful businessmen, the Argos of Toronto have done little but lose games and make money since their last Grey Cup in 1952. But this season, thanks to a “run-andshoot” offence, a healthy Condredge Holloway at quarterback and new head coach Bob O’Billovich, the Argos stunned the league and their masochistic fans by finishing first in the East. In their final game Saturday they beat one of the league’s ’Riders to set up a game at home in two weeks for a shot at the Grey Cup Nov. 28 in Toronto. Ignoring tradition, the Argonauts pulled it off 28-14, either not willing or forgetting to collapse. Their nine wins and a tie gave the Argos their first Eastern Conference first-place finish in 11 years. Meanwhile, the Esks were playing in the West with first place on the line, restoring a semblance of normalcy to a season that might have been. 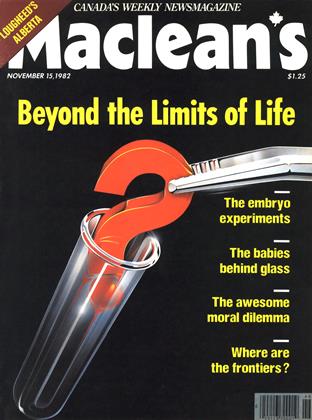