The cops who went to dinner LINDA MCQUAIG November 22 1982

In recent years stories of police brutality have regularly bubbled to the surface in Toronto. Still, no matter how many lawyers and civil libertarians rallied to the side of the alleged victims, the charges were almost invariably based on the word of criminals—and denied by members of the Metropolitan Toronto Police Force. But, in the past two weeks in a Toronto court, many of the same allegations have been voiced, with a striking difference: this time they are coming from two policemen.

In a lengthy series of videotaped con-

versations, two members of the Toronto force suggest that some police beat suspects, that they regularly lie in court and that they flout the rules of the criminal justice system to get convictions. The comments, made at seven lunch and dinner meetings, were clearly not meant for public consumption and they have been vigorously disavowed. But a hidden microphone and video camera that recorded 37 hours of the talks have left a trail of embarrassment all the way to the office of Ontario Attorney General Roy McMurtry.

The bizarre series of events that led

to the taping began more than two years ago when police raided the apartment of 49-year-old Toronto stock promoter Neil Proverbs. They found him crouched over a shotgun and charged him with possessing a dangerous weapon. Proverbs became so convinced that the police were trying to frame him in their testimony at the subsequent preliminary hearing that he embarked on an elaborate scheme to prove that they were lying. As part of his plan, Proverbs persuaded the owner of the Capriccio Toscano restaurant to allow him to set up videotaping equipment in his establishment. Proverbs then lured Sgt. George Reynolds (who had arrested him) and Sgt. William Bullied, both veterans of the elite intelligence squad, to the restaurant by suggesting that he had information about a $90-million heroin deal. Although the drug deal never existed, Proverbs led the two policemen to discuss supposedly routine police tactics over food and drinks.

In court, the police officers insisted that what they said on tape was concocted to humor Proverbs and gain his confidence so that he would tell them about the heroin deal.

Proverbs’ defence hinges on showing that the police lied at his hearing. But the more worrisome issue is whether or not the two policemen were telling the truth about police conduct in their unguarded conversations at the restaurant. For his part, Toronto Police Chief Jack Ackroyd dismissed the tapes as insuffiently substantive to be used as evidence. However, the tapes are an amazing amalgam of every sin a defence lawyer has suspected on the part of policemen. Among the most striking statements is the officers’ claim that two-thirds of the testimony they give in court is phoney. Said Bullied on the tapes: “We tried to hone lying to a profession.” They also said on tape that they fabricate evidence when it is necessary to get a conviction. They claimed that, if a girl said she was wearing a green dress while being raped but she does not own one, “we’ll go out and buy her one if we have to, to get her into court.” They even suggest on tape that some judges know that this kind of alleged misrepresentation takes place. In one portion of the tapes echoing the police torture allegations raised by lawyers last winter, they bragged that police can get anyone to sign a confession about almost anything, because, said Reynolds: “You don’t have to be an overly intelligent person to realize that once you sign the paper, the pain stops.”

Some of the most provocative allegations involve alleged political interference by Attorney General Roy McMurtry. Bullied implied on tape that a police investigation into the Toronto wastedisposal industry was hampered after McMurtry discovered the name of one of his friends on a police list. As he has constantly done throughout the trial, Reynolds also denied that this was true.

McMurtry has sidestepped calls for a public inquiry, saying, “the view of the Metropolitan Toronto Police is there was no substance to any of his [Proverbs’] allegations.” Although the attorney general’s office received an edited, five-hour version of the tapes eight months ago, it was only after the contents of the tapes were revealed in The Toronto Star in September that McMurtry set up an investigation by the Ontario Provincial Police.

Toronto lawyer Clayton Ruby charges that the OPP does not have sufficient independence and that McMurtry should not be in a position to decide whether a public inquiry is to be held. Ruby also argues that the brutality allegations jibe with those made by lawyers and alleged victims last winter. “What do you have to do, pour blood on his desk before he considers there are grounds for an inquiry?” asks Ruby.

The whole Proverbs case is laced with intrigue—with Proverbs saying that he was trying to fool the police and with the police saying that they were trying to fool Proverbs. One of the more puzzling exchanges took place when Proverbs, reading from what he claimed were notes from the tapes, said he told the police that “the heroin is off, gone; all heroin is terminated.” Afterward, he claimed, the police continued to boast about their ability to frame suspects. Reynolds said he did not understand at that time that the heroin deal was off and denied that Proverbs had told him so.

Whatever the jury decides about Proverbs’ weapons charge may not settle public doubts about police conduct raised by the tapes. The case is, in fact, attracting wide attention just at a time when the issue of police misconduct is about to resurface in Toronto. Sydney Linden, a lawyer appointed last winter to head a revised police complaints bureau, soon plans to make public his report on allegations that Toronto police tortured suspects. Linden will also monitor the OPP investigation into the Proverbs case, and demands for a public inquiry continue. Indeed, the trial may be just the beginning of a long attempt to determine whether the 37 hours of tapes portray a police hoax or provide a rare and ominous glimpse behind the impenetrable walls of police stations. 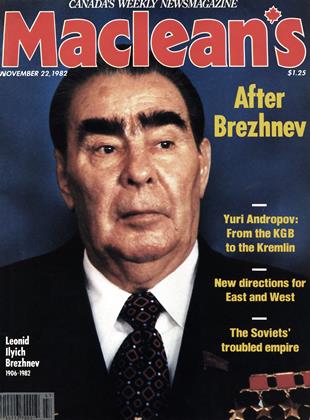