When she captured the party presidency at the Liberal convention in Ottawa this month, Iona Campagnolo billed herself as a gutsy outsider pitted against the party establishment. She vowed to “review, renew and reform” the governing Grits. This week Madame President’s real tasks start when she begins crisscrossing the country in an attempt to raise the spirits and fill the coffers of a party $900,000 in debt. But that job may be the least of her worries. Her other challenge will be to walk the fine line between the Liberals’ powerful inner clique, headed by Senator Keith Davey, and the grassroots delegates who elected her in the interests of change. The unstable combination of an ambitious Campagnolo, a crafty Davey and an impatient grassroots may well form an explosive mix which could blow up anytime.

Campagnolo has a measure of freedom to challenge Davey’s authority, because the convention delegates have already slightly eroded his power base. In an emotional session, they passed a bold resolution from the Liberal youth organization that condemned “polls, propaganda and patronage orchestrated by a small elite.” Meanwhile, in the back rooms, the senator was thwarted in most of his attempts to punish his chai-

lengers. Among other things, Davey and his operatives talked an Ontario delegate into running against former youth commission president Tim Hamilton for the post of chairman of the party’s standing committee on organization. But Hamilton and other angered Liberals warned Davey loyalists that they would not hesitate to publicly denounce the senator and his tactics. Confronted by that ground swell, Davey was forced to ask his candidate to with-

The combination of an ambitious Campagnolo, a crafty Davey and an impatient grassroots may be explosive

draw. And Hamilton—an ardent supporter of the upstart youth resolutionwon the post by acclamation.

But Davey, who refers to Campagnolo as “an old pal,” still seems to be in control of the party machinery. Although he admits he has enemies in the party, the senator still has the ear of the prime minister, and his circle has a large say in the distribution of patronage handouts. When the senator turns on an op-

ponent, the results can be devastating. After former party president Norman MacLeod told Davey that he disagreed with manoeuvres used to force a 1981 byelection in Toronto’s Spadina riding, Davey simply isolated him within the party and then allowed the challenge from Campagnolo. “They [Davey and his supporters] still control patronage, policy and the actual operation of the party itself,” says one member of the Campagnolo camp. “She has to be careful.” Meanwhile, Davey has recovered from the convention rebuke. “I didn’t feel very happy about being called a cancer on the Liberal party,” he confesses. “But I have been in the back rooms for 20 years—from time to time there’s heat, and, if you can’t handle it, you should leave.”

Confronted by the party’s entrenched power, Campagnolo has to act prudently. Although she has promised to set up a party reform commission, it will not report until after the next election. The group will be chosen from the party grassroots: rank-and-file question-

naires will be tabulated by each riding association, which will then choose a delegate to take those views to a regional meeting. Campagnolo estimates that by next fall each province and territory will have selected a delegate for the 14-member commission. Then it will begin work. “I can’t see implementing a vast number of reform undertakings while raising money and trying to do what is necessary to win the next election,” Campagnolo argues. “But I’m open to reconsideration about the commission deadline.”

If Campagnolo succeeds in convincing her reform-minded colleagues on the party’s national executive to accept a postelection deadline, she and Davey may manage an uneasy truce. Davey would naturally welcome such a delay. Moreover, the solid policy output from the convention—which may force the government to pay more attention to demands for such changes as tax reforms—has also boosted the prestige and clout of the grassroots forces.

Meanwhile, Campagnolo has directed her energies to fund-raising. Most riding associations have healthy bank balances, and Campagnolo will be asking MPs to help stream money upward to aid the strapped federal party. She has also committed herself to a cross-Canada round of fund-raising speeches and pep talks with dispirited party workers. “I want to democratize this party,” insists Campagnolo. “My job is not to be the power broker but the messenger.” Her only danger is that the senator may adopt the ancient custom of destroying the messenger if he does not like the message from the rank and file. 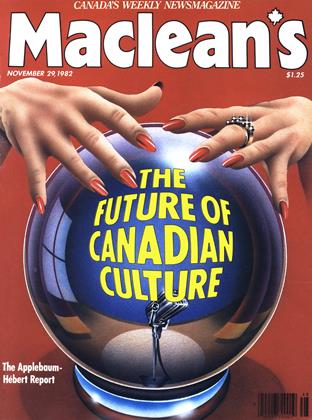