Terry Ryan went blind in a particularly grisly fashion. Only a few weeks after starting as a transformer cleaner at the Westinghouse plant in Hamilton, Ont., 23-year-old Ryan peered into a vat of what he thought was soap and water. As it turned out, there was also a powerful chemical solution in the suds, and when he shook the vat, the solvent exploded, blowing Ryan into the air in a mass of flames.

After 40 days in the hospital, he emerged without a sense of taste or smell—and without any sight. The Ontario Workmen’s Compensation Board (WCB) granted him a disability pension of $270 a week, plus $400 a year for food for his Seeing Eye dog,

Diggits. But what makes Ryan’s case one of more than passing and provincial interest is that later this month Ryan’s Toronto lawyer, Richard Sommers, will try to break a long-established taboo by asking Canadian courts to award Ryan $17 million in civil damages as well.

The accident that drastically altered Ryan’s life brought Ontario’s health and safety inspectors to Westinghouse to investigate. They concluded that the company was not at fault, and no charges were laid. But an outraged fellow worker,

Stan Gray, who was a union health and safety representative at the plant, did his own seven-month investigation and came to radically different conclusions. A month after he submitted his report to the Ontario government, charges were laid under the Health and Safety Act. Westinghouse pleaded guilty and was fined $5,000. At that point, Ryan launched his civil action.

The suit is innovative because it attempts to circumvent the legal restrictions of Canada’s compensation system. Under provincial legislation, a worker is not allowed to sue his employer. But

Ryan is trying to sue eight executives of the company, not the company itself. If his suit succeeds, it will open the way for similar suits and crack the thick wall of compensation law.

Ryan’s dramatic action is just one indication of the growing frustration over Canada’s system of protecting and compensating injured workers. Their main

recourse lies in provincial compensation boards—bodies that operate insurance schemes to provide injured workers with compensation through funds collected by compulsory annual assessments on companies. While workers do not want to see the compensation system dismantled, many are frustrated by what they perceive to be the board’s reluctance to pay fair compensation for their injuries. In addition to the problems of the compensation system, many labor leaders complain about the hesitation by provincial governments to set tougher safety stan-

dards for employers and enforce them vigorously when they are violated. Gray argues that such government inaction and the immunity from lawsuits that companies enjoy under the compensation system have created a situation in which there is little financial remuneration for the injured worker—and little incentive for employers to do anything about shockingly high death rates in the workplace.

Those rates in Canada are higher than is widely known. According to a 1981 book called Assault on the Worker, a Canadian dies on the job every six hours—about 10,000 each year. And a 1979 Osgoode Hall Law Journal article says that the situation will get worse as more and more toxic and carcinogenic chemicals are introduced into the workplace and cause more industrial disease. Already there are some 25,000 chemicals used in North American factories, with new ones added at the rate of 500 to 600 each year. William Hamilton, president of the Employers’ Council of British Columbia, acknowledges that the workplace can be dangerous but insists that life itself is fraught with dangers. “I read that I am likely to get cancer from sex and coffee,” he says, “yet I still enjoy them both.”

What angers many workers is that life seems to be considerably more dangerous at the bottom end of the work ladder. In a 1978 federal labor report, mining, for instance, had a disastrous record of 75 deaths per 100,000 workers, while the financial sector claimed only one life in 100,000. Surprisingly, Alberta, for instance, had a higher fatality rate from mining over a 12-year period ending in 1980 than the United States or the United Kingdom. Harry Glasbeek, a law professor at Toronto’s Osgoode Hall, argues that these occupational deaths constitute a kind of “structured violence” that goes largely unreported and unchallenged.

But, if workers are frustrated about industrial injuries, they have basically only one option—to seek compensation through the provincial boards. The compensation system, which was revolutionary when it was first introduced in 1917, provides workers with disability pensions without the need to prove that their employer was at fault for their injury. But the provincially appointed boards wield enormous discretionary power in determining whether a disability is work-related, how serious it is and, therefore, what percentage of his salary a worker should

receive in compensation. And, when workers gained the right to compensation, they essentially forfeited the right to sue almost any private employer within the province. As a result, workers have missed out on the increasingly generous settlements courts have come to award in civil damages.

The case of Luis Guerrero illustrates the extent of the difference most dramatically. The 28-year-old Toronto man was severely disfigured in 1977 when a machine exploded, splashing molten plastic into his face. The Ontario WCB awarded him a pension of $200 a week and considered the case closed. But Guerrero was able to go outside the compensation system because the company that manufactured the machine, Midland Ross of New Jersey, operated beyond Ontario’s jurisdiction. Guerrero sued the company and won an out-ofcourt settlement of more than $20 million—an amount that, with his disability pension, would have taken him almost 2,000 years to collect from the compensation board.

The most striking feature of the case was the board’s attempt to interfere with Guerrero’s suit. The board could have sued the company itself and recovered damages on Guerrero’s behalf, but it did not. However, when Sommers approached the board for information about Guerrero’s case to help him with the U.S. suit, the board cut off Guerrero’s benefits and refused to provide information until Guerrero first agreed to repay his board benefits—plus a 10-percent administration fee. The board further warned that, unless this was done, it would take control of any money that might be won in the suit.

Solicitor William Riddell says the board cut off Guerrero’s benefits because Sommers would not agree to pay back Guerrero’s compensation benefits in the event of a successful suit. But correspondence between the board and Sommers reveals that Sommers offered to include the board’s costs in the lawsuit.

The real benefit of such massive suits, according to Sommers, is that the enormous costs focus the minds of employers on improving safety conditions. In the United States, where suits are relatively common, some insurance companies insist on doing their own vigorous health and safety checks at plants before insuring a company.

But, while lawsuits are headlinegrabbing and produce the occasional bonanza for injured workers, few workers see them as the answer to their grievances since court claims are costly, slow and difficult to win. Instead, compensation lawyers argue that deterrence should come from tougher government enforcement of safety regulations and more vigorous prosecution of

offenders. “If the physical onslaught which takes place in the workplace occurred outside,” says Glasbeek, “there is no doubt that society would use the most formidable tool it has to stop such attacks: it would use criminal prosecution and treat offenders as social pariahs.” Instead, labor critics charge that there are usually only minimal fines for violations of health and safety laws that result in serious injury. Ontario Gypsum of Ajax, Ont., for example, was fined only $2,000 earlier this year after a conviction under the Health and Safety Act in connection with the death of John Royal, 18. An inquest revealed that he suffocated in a vat of moist drywall compound after the company had removed a grate on a machine that was slowing production. Royal’s stepfather, Peter Krahl, says the $2,000 fine is a “human insult” and has called on Attorney General Roy McMurtry to lay charges of criminal negligence—a step that provincial governments have traditionally been reluctant to take. McMurtry’s office would not reveal whether it plans to lay charges.

If critics are keen to retain the Canadian compensation system, they want significant reform. Toronto lawyer Richard Fink argues that compensation boards have protected companies from burdensome financial costs through their tardiness in recognizing and compensating victims of industrial-related diseases. The U.S. National Cancer Institute estimates that some 20 per cent of cancers are work-related. Yet the Ontario WCB, for example, has accepted claims for only 582 cases of cancer over the past 35 years. “The essence of why the board is so backward about this is that it makes perfect sense for employers,” Fink says. He adds that he was shocked to discover that the board, in assessing a case of lung disease (silicosis) in 1980, used standards based on a 1937 South African classification for the disease. Says Vancouver lawyer Craig Paterson: “The compensation system is very antagonistic to disease claims.”

In the absence of criminal charges and hefty lawsuits—and with compensation boards basically keeping the lid on employers’ costs—corporations have few real financial incentives to improve their safety records. Hamilton, of the B.C. Employers’ Council, says that companies are concerned about injured workers and try their best to improve plants. But he points out that companies face high costs in reducing hazards in the workplace. “Until a danger is well documented, there is some hesitancy about providing a solution,” he says. But critics increasingly counter that with more severe penalties for injuries, companies might seek solutions more quickly. O 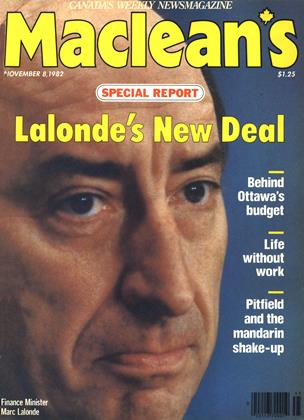