High Park housewife Ann Campbell is just one of the project’s enthusiastic supporters. “I'm dying for it. I can’t wait and I will gladly pay my $750 to have it back,” she exudes. The object of her affection is Toronto’s foremost women’s club, Twenty One McGill, which was destroyed by an arsonist on Nov. 12, 1980, and has since been almost completely rebuilt. The reopening was scheduled for last December, delayed until June, and postponed again to September. Then, members were notified via a silvery invitation that the fashionable downtown health and social club would reopen on Dec. 15.

This year dozens of big and small health clubs went out of business, angering thousands of loyal members

The slightly rearranged Twenty One McGill will be a cross between an English country home and a French ballet school, complete with day care and a wide range of sports activities. It will also offer courses ranging from pastamaking to stock-portfolio management as well as the all-important opportunity to dine in style. “For things like this, people will make sacrifices,” says Beveridge. “It’s an extraordinary fact that 1,500 members have already paid their dues. That’s an awesome display of faith.” Some of the faithful faltered, however, and, during the long McGill hiatus, joined the gilt-edged Elmwood Club—for a cool $4,000 and $450 annual dues—owned by Thomson newspaper heiress Sherry Brydson.

But many less affluent, middle-income women are choosing to join a myriad of less toney fitness clubs. Yet, according to Paul Tuz, president of the Toronto Better Business Bureau, fitness clubs are a “Pandora’s box,” and the members of Twenty One McGill have escaped most of the problems that confront many consumers who simply want a no-frills remedy for flab. “Literally anybody can rent the second floor of a building, call themselves a fitness whatever, and start selling memberships,” says Tuz, whose office receives several hundred inquiries and complaints about health clubs every week.

This year dozens of small health clubs went out of business in Toronto. The oldest of them, Vic Tanny’s, closed all 12 of its Metro franchises, angering thousands of members who had signed contracts, sometimes for a lifetime, at as much as $1,000 each. The Ontario consumer and commercial relations department has received 16,000 complaints from former members of the club throughout the province. Other, lower-profile, clubs have also been known to appear at one location, sell memberships, and then move to less convenient and less luxurious premises.

Still, some of the smaller clubs are fastidious in their attention to professional detail. Kathleen Lawrence, manager of the Figure Design Studio in Mississauga, for one, has a nutritionist and an instructor trained in cardiopulmonary resuscitation (CPR) on staff. “We’re not used-car salesmen,” she says, “but it is hard for honest people when there are so many others out there who are more interested in sales than in helping people get fit.”

As a result of the controversies, many fitness-conscious people are signing up with the tried-and-trusted YMCA, which has recently expanded its facilities to keep up with demand. So far this year, its counterpart, the YWCA, has signed up 7,000 women for fitness programs that cost an average of $50 for 14 weeks. Instructors are well qualified, and there is virtually no possibility that the local “Y” will close its doors. “The difference is that we are not attempting to make a profit,” explains Rita Mifflin, director of community programs and services for the YWCA.

While Mifflin extols the strippeddown virtues of the “Y”, she is also a card-carrying member of Twenty One McGill. But, unlike Ann Campbell, who cannot wait to pay her dues regardless of the cost, Mifflin is upset about the 25per-cent increase. “It’s a lot more than inflation, and I will have to do a hardnosed assessment,” she says firmly. Consumer logic aside, Mifflin is keenly awaiting the Dec. 15 opening, when she will finally be able to return to the clear, clean swimming pool at Twenty One McGill. “It’s going to be changed, I know,” she says, “but at the opening I’ll bet it will be like Creeds’s Boxing Day sale. Everyone will want to get inside.” -MARSHA BOULTON in Toronto. 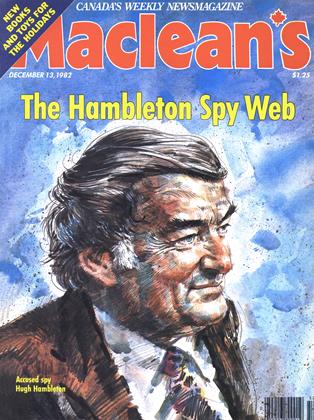