Not long ago, the Cariboo Mountains in the British Columbia interior belonged largely to the beavers and the squirrels, interrupted only by an occasional logger or lone prospector. For the past 11 years, however, a patch of the rugged bushland has been overrun with people clutching bits of paper, gazing intently into middle distance and whispering to each other about winged serpents and Indian cave drawings. Some can be found along the CNR line, eyes to the ground in the noonday sun as they count out 1928 railway ties. Others wait by the edge of a lake after dark, hoping to see the pattern of a cross on the water by moonlight. “We see RVs and motor homes creeping through on roads that are about three feet wide because they’ve been washed out, and people walking and riding motorcycles. . . . It’s like

Grand Central Station with all the people out there,” says one Kamloops resident.

These are the treasure seekers, tripping over tree stumps and wading through muddy ponds in search of a hoard of antique silver coins worth more than $35,000 (which are “hidden yet can be seen,” according to one particularly baffling clue) and four smaller caches buried somewhere in the bush. It’s known as the Kamloops Centennial Treasure, one man’s way of celebrating the British Columbia centennial in 1971.

A wealthy prospector hid his coin collection—152 kg of coins dated from 1853 to 1971—somewhere near the North Thompson River about 200 km north of Kamloops and left it there for anyone to find. Three clues to the location were published in The Kamloops News when the hunt began, and three more clues have been released each year since. The latest clues,

published this month, are:

• Between asphalt highway and river is placed an aluminum disc showing compass bearing and distance to main treasure. Look for tree stump.

• By tunnel, on placed axe in tree, is shown compass bearing and exact distance to main treasure.

• Eight paces from centre of old

The fact that no one, out of the thousands who have trekked through the area, has turned up so much as a penny of buried treasure might lead one to suspect that the whole thing is an elaborate hoax. And yet Mel Rothenburger, editor of The Kamloops News, says, “I’m sure the treasure hunt is for real.” The Kamloops News ran a photo of the coins, taken just before they were hidden, by Neil MacDonald, then a staff photographer and one of the few who actually knows the name of the donor. Other members of The Kamloops News staff are still in the dark. “All I know about it,” says Rothenburger, “is that someone slips an envelope through the slot some night in January and I have a new set of clues to print. I never had any direct contact with our Good Sa-

maritan, and I don’t know who he is.” One man who does know is an eccentric Kamloops resident who supposedly helped the donor hide the coins. Now acting as “custodian” for the donor, he checks the treasure twice a year to see if it has been found, and delivers the clues to the newspaper. Like the donor, the custodian wishes to remain anonymous

(“Otherwise we’d never get any peace”), but he will talk to a reporter, provided his name is not used. Some suspect that he and the donor are in fact the same person, but even in private the custodian insists that two men planned it from the start.

“Everybody was talking about the [B.C.] centennial back in 1971,” he says, “and this man wanted to do |something special. We iwere chin-wagging >over a beer one day, and |he mentioned that he £was getting tired of his îcoin collection—so I gsaid, ‘Why don’t you 2bury it?’ “That was a joke at

first, but a couple of days later he called me to his house and he wanted to talk about it. He said if we buried it in a place where not too many people go, it would open the area up. And he figured it would also get the bastards out to do a bit of walking and see some of the country they live in. Most people in Kamloops these days never get out into the woods.”

All that has changed. Ruby Sinclair, who runs the Eleanor Lake Campground at Blue River, about 12 km north of the treasure area, encounters hundreds of treasure hunters every year. “It’s unreal,” she says. “We had two couples who came up from Kamloops with about six kids in early spring—while there was still 2xk feet of snow on the ground —and they spent 10 days in there on snowshoes. They were in there dawn to dusk, every day. And then they were back in the summer for another two weeks.” Sinclair is skeptical that such perseverance will bring rewards. “You know who’s going to find that treasure? It’s going to be someone just out for a stroll who doesn’t know anything about it.

He’s going to stumble over it and he won’t even know what it is.” Like most nearby residents,

Sinclair says she has never spent time looking for the hoard.

According to Philip Rau, owner of the Avola Motel, where a copy of the clues is posted in the lobby: “Most of the guys around here are loggers.

They spend all day rooting around in the bush, and the last thing they want to do is to go back into the bush on a weekend.”

Kamloops businessman Larry Maki, on the other hand, heads for the woods at every opportunity. He has even become a part-time prospector in his search for the treasure and has filed some claims in the area. Aside from the man who buried it, he claims to be “the greatest expert on that doggone treasure today.” When Maki first saw the clues eight years ago, he thought it would be a cinch to find the coins. “It looked so easy. I just couldn’t believe that no one had found them. But then I drove up there and I stopped at a lookout and all I could see was trees. It was so dense I couldn’t even see the

river.” Maki is not embarrassed about his obsession, but he says other treasure seekers are: “Two strangers will meet out there in the bush and one will ask the other, ‘You looking for the treasure?’ And then the other will say ‘No. You?’ And then the first one will say he’s not looking for it either. But

neither of them has to ask ‘What treasure?’”

Some believe that the treasure can no longer be found. Suzi Snook and her husband, Bill Mercer, who lectures in psychology at Cariboo College, have been searching since they came to Kamloops 2V2 years ago. “Now we know exactly where the treasure is. It’s in a lake, and the level of the lake has risen drastically since 1971. The whole area has been flooded by a beaver dam.”

The treasure is not lost, says the custodian, who last May narrowed the

search area to roughly 24 square miles by issuing a special “custodian’s clue,” which limited it to a 12-km stretch of railway track starting about five kilometres north of Avola. Earlier clues place the treasure within about five kilometres of the track and near a lake. The special clue was necessary because important landmarks mentioned in earlier clues have been removed, some suspect by other treasure seekers. A logging chain wrapped around a tree is gone, a date has been chiselled off a rock face, and a military hat

badge has been removed from a tree. A painted blue rock, “eight feet high and fifteen feet long,” has been buried by a landslip started by dynamite. A picture of a winged serpent carved on the rock was the main clue to the direction of 33 gold sovereigns, one of the four smaller treasures. Without it, experienced

treasure hunters say, there is little hope of finding the sovereigns— worth between $300 and $500 each—whose burial site is now marked only by a small railway tie tack hammered into a tree.

The four smaller caches, which include the sovereigns, 314 Victorian pennies, 81 50-cent coins and 100 silver quarters, are all buried separately from the main treasure. According to the custodian, the donor expected the original treasure to be found within a few years, and he buried the other treasures to continue the hunt.

Where will it all end? According to the agree ment between the donor and the custodian, the custodian can claim all the treasure himself af ter Jan. 1, 1984, but he says he doesn't plan to.

When the hunt is over, he says he will probablytake the sovereigns but leave the silver coins for whoever finds them.

For the man who initiated it, the hunt has been worth its weight in coins, says the custodian. “It’s gratifying to see families getting off their butts.” But he denies that he has deliberately made discovery impossible in order to prolong the amusement indefinitely. “I really do want someone to find that treasure— but I don’t want to lead them to it myself. Outside of putting a neon sign on it, I don’t think I can do any more.” 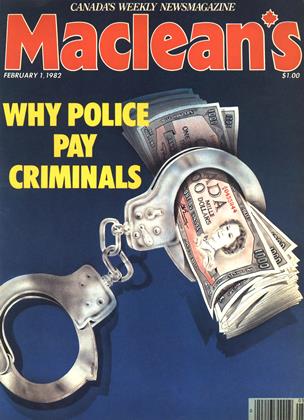