Hockey has become a celebration of violence, greed and macho posturing. So much so that the elbow to the chin and knee to the groin have been sanctified as the sport’s most essential instruments. Sportscasters with hairy forearms and strident voices seem constantly to be invading the TV screen, telling us more than we don’t want to know about each player’s stud line, mid-season scoring total and beer endorsements. The sport that rightly claims to be the only true Canadian invention has become what the late Ralph Allen, a former editor of this magazine, called “a double-barrelled exercise in delinquency— the juveniles on the ice; the adults in the expensive seats up above.”

An exception is Wayne Gretzky, the shy Edmonton Oiler who hardly allows a week to go by without rewriting the record books. His modest style, subtle dash and relaxed confidence add up to a touch of magic on the ice. It’s magic to watch him sneak the puck behind some hapless goalie’s back; magic to see him stickhandling his way across the blue line; magic to observe him outmanoeuvring his opponents instead of trying to elbow, slash or board them.

In his best-selling celebration of the Oilers’ 1981 season, The Game of Our Lives, Peter Gzowski advances

the notion that Gretzky may be the beneficiary of a delayed time-frame mechanism that calms down his view of the action around him, allowing him to anticipate and react at a speed out of sync with his opponents. What separates Gretzky from his peers, writes Gzowski, “may well have nothing to do with physical characteristics but be a matter of perception, not so much of what he sees but how he sees it, and how he absorbs it.”

There is something very Canadian about the Oilers’ centre superstar. Having to handle mobs of adoring women and almost $2 million a year in pocket money seems hardly to have turned his head. “I just feel lucky to be one of the 420 guys who get to play in the NHL,” he told Maclean's sports editor Hal Quinn (page 36).

It is entirely appropriate that Gretzky should be born in Ontario yet be playing for an Alberta team. The West is where the largest share of Canadian imagination and risk-taking currently resides, and Peter Pocklington, who had the foresight to sign him to a 21year contract, then reopen it to raise the stakes, is typical of this welcome new breed.

Gretzky has in the past been written off as a prodigy about to be exposed as a kid who got lucky. He is not. He is as fine a hockey player as this country has ever produced and is in the process of becoming a genuine hero to a nation that badly needs one. 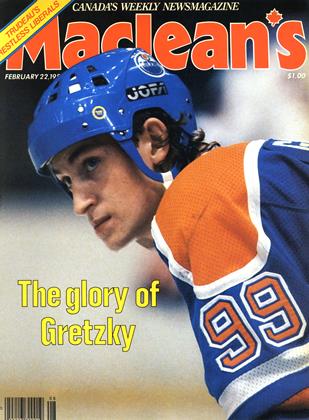